We’ve profiled a lot of photographers who have used various props in their photos — but no one quite like Alexander JE Bradley. Rather than using costumes, toys or even animals, Alexander brings gallons of milk to his photo shoots. It sounds strange but the result is one hilarious photo.

“Nobody believes me when I tell them that I throw milk on people for a living,” Alexander tells The Weekly Flickr in the accompanying video. “But of course when they look at my photos, their reactions are priceless… lots of smiles, laughs and bewilderment. And I think, that’s probably why I keep doing it!”

The idea behind Alexander’s milking series came about on a trip to his native Australia in 2011. At the time, he was planning a party for some of his friends and randomly wanted an image of someone having milk thrown on them. 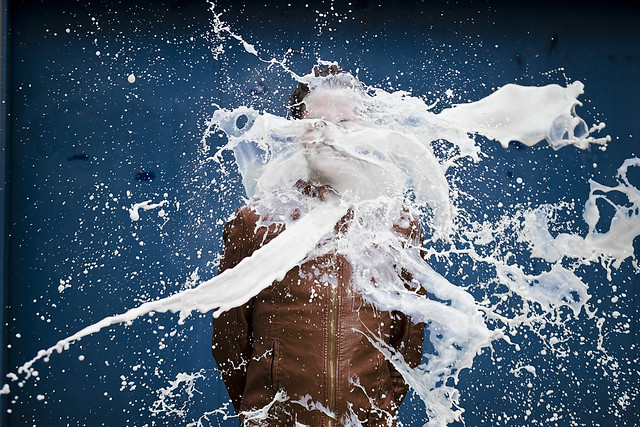 “I searched the internet for the image I had in my head, but I couldn’t find it anywhere,” Alexander explains. “Because I didn’t want to live in this kind of depressing milkless world, I took the initiative and decided to shoot one myself. My friends and I grabbed some milk, asked a friend if he would be cool if we threw milk on him, he said yes, and the rest is history. It was fun and everyone got a kick out of it.”

“The irony though?,” Alexander adds, “I’m lactose intolerant, so I don’t even drink milk!” 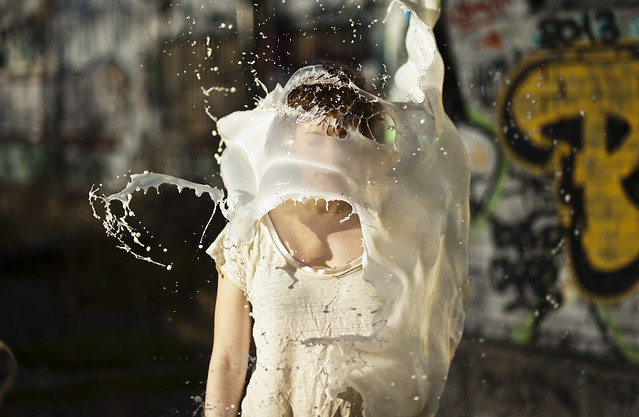 When Alexander returned home to Paris and decided to make a series called, “Le Grand Spectacle du Lait” (The Great Spectacle of the Milking). He gathered a team together — including extremely eager subjects — and began taking photos. Shoots were usually long with up to 10 people getting milk splashed repeatedly on them. At the end of the day, however, Alexander said everyone had fun watching each other’s reactions.

“Typically I burst shoot my photographs, so often I have six photos where the milk is in different stages of flight and contact,” Alexander says. “It can be quite challenging to choose which exact instance is the best. I think over the course of the series I have got most of the moments: the anticipation and terror before the milk hits, the initial shock upon impact and usually the hilarity that ensues after the fact! I try to just take a close look at the expressions of the individual and see which one looks the most interesting.” 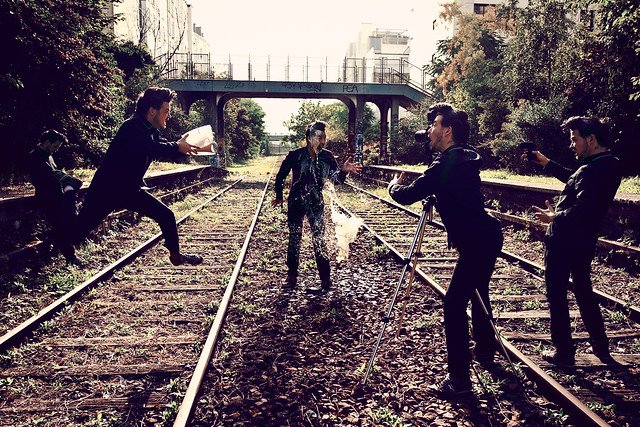 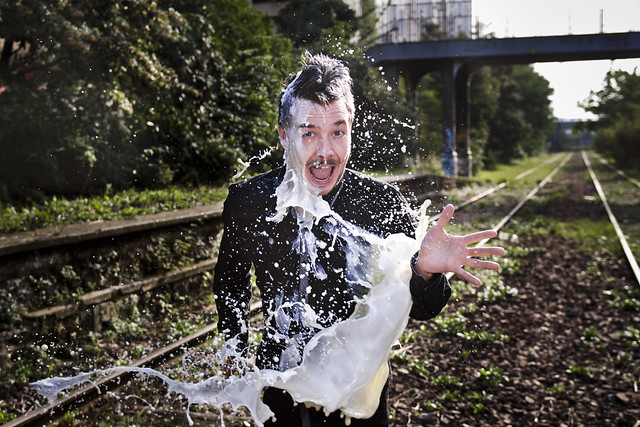 Alexander never offers his subjects any advice — opting to capture the spontaneity of the moment — although he does try to make sure people keep their eyes open.

“Eyes are such an important part of photography,” Alexander says. “That’s why I really like this image of Emily Farley. You can see she kept her eyes [open] the entire way. She didn’t flinch once, and you can see the milk cascading down her eyeballs. It’s pretty gross if you look at it quite close, but I think it’s what makes it one of my favorite images.” 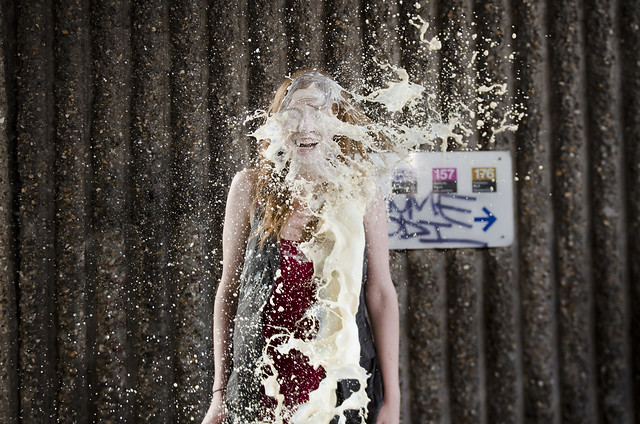 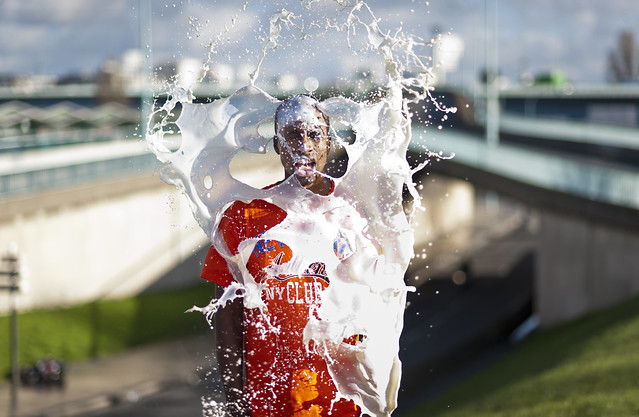 Another one of Alexander’s favorite photos is Cookie Man.

“It was one of the early photographs I shot,” Alexander says. “There was something just so sweet and innocent about the image, the expression and the scenario that I love. Plus, the form from the milk was fantastic.” 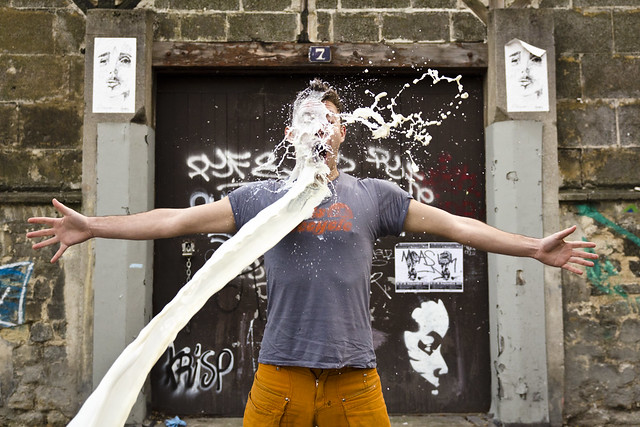 Alexander admits the best reactions come from random people who walk by and unexpectedly witness his shoots.

“I remember being amazed when a group of children with their parents walked past,” Alexander recalls. “They just stopped to see what we were doing. And as soon as we launched our milk they turned excitedly to their parents screaming, ‘Can we do it! Can we do it! Can we! Can we!’ I was really surprised when their parents responded, ‘Now just go and ask the nice photographer man and see if he’ll let you do it.’ Of course I did and that picture was hilarious.” 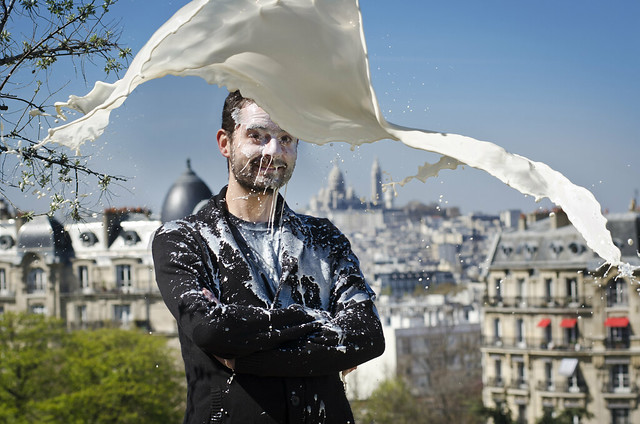 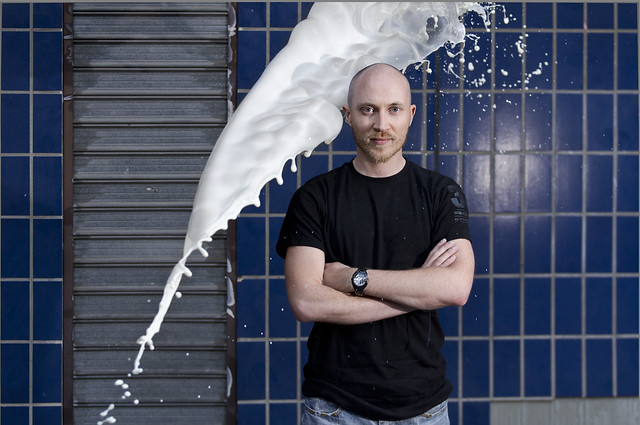 Overall, Alexander says the responses to series are pleasantly divided.

“Half will ask me from what depths of the devil’s reach did I find these ludicrous people who purposely chose to be submitted to such horrific acts,” Alexander says. “And then the other half will ask me how much did they have to pay me to get them to take part in this series!”

“Every now and again I will see…a comment under my photo reading ‘What a waste of milk’,” Alexander admits. “But I am not wasting anything, I am creating something. Do you think anyone went up to Leonardo da Vinci and told him he was wasting paint? It is the same idea. As a visual artist, anything I put into my photography is a tool of my trade. And in this case, it is milk. It is my creativity, and I don’t consider that to be a waste at all.” 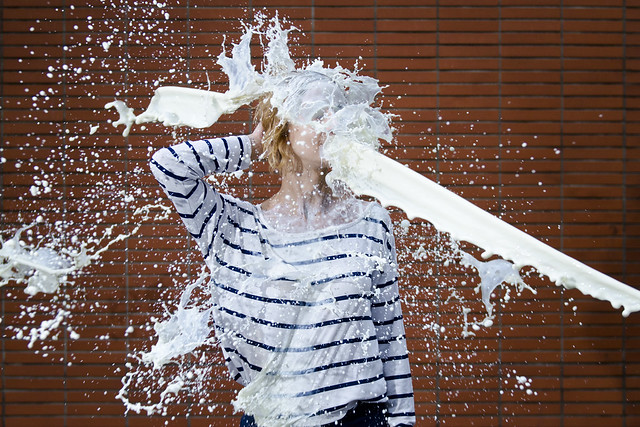 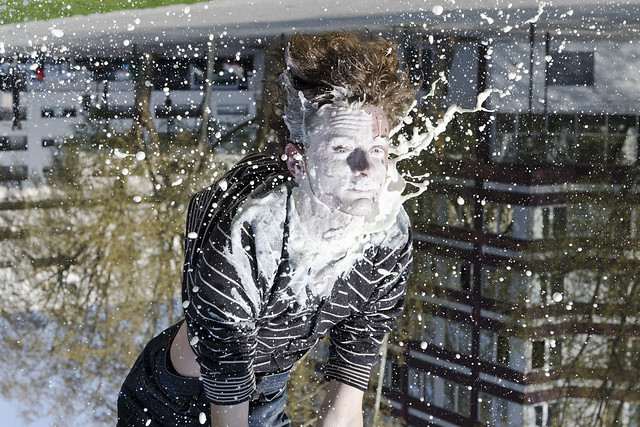 When asked about the objective for his milking series, Alexander says, “If it makes people smile, then that’s good enough for me. Most of my work is pretty crazy, this is probably a reflection of myself as a fairly offbeat person. And as an Australian, I think I have a rather rye sense of humor and will find something absolutely hilarious that others might just think is a bit odd. But it’s all fun.”

Visit Alexander’s photostream to see more of his photography.