“Firsts” is the theme that guided the State Library of New South Wales‘ curation of their first installment in The Commons on Flickr. Welcome!

Browse some Australian aviation firsts, like this, the first passengers carried in a powered aircraft, at the Ascot Raceway in 1911:

Or, glimpse into the lives of the first Australian Antarctic explorers (a lovely complement to the Arctic imagery in The Commons already):

Meet Dr William Bland. An ex-convict, he was a prominent surgeon, humanitarian, social reformer and inventor. This daguerreotype is the earliest known surviving photograph taken in Australia, taken by the first commercial photographer in the country, George Goodman.

In another Commons first, there are photos of the R.M.S. Olympic, the “sister ship” of the Titanic and Britannic (source) available from both the Library of Congress and the UK National Maritime Museum. It’s very exciting that brand new “collections” of photos are beginning to come together from the contributions of different institutions!

And, there’s great information being added in the comments: lawrence_thefourth says:
The date on this photograph – April 10, 1912 – is the date that her sister ship, Titanic left Southampton on her fateful maiden voyage.

swanq says:
See the New York Times archive which says, ‘With more than two thousand passengers on board, of whom more than nine hundred were in the first cabin, the White Star liner Olympic from Southampton arrived late yesterday afternoon. As the Olympic steamed into New York harbor, her sister ship the Titanic started on her maiden voyage from Southampton for this city.’

Among the passengers was the English actor, Sir John Hare.

ZoomNFocus says:
I get the shudders just viewing this at maximum pixel! Small by today’s standards, but only because shipbuilders of 100 years ago tended to employ high length: width ratios(9.0 & higher) vs modern liners which are much wider for the same length.

If Olympic were 102 feet wide instead of 93 and were one deck taller she would’ve held the size record for another 10 years.

Oh! And, since we’re talking about Australia, you might be interested to know that we’ve imported Australian map tiles from the fabulous Open Street Map for Sydney, Melbourne, Brisbane, Adelaide and Canberra. These are in addition to the few updates we made last week for Latin America. Have a look at the new Australian tiles?

The Powerhouse Museum, who joined The Commons back in April this year, has placed about 300 of their photos on the map. Thanks to the updated tiles from OSM, it’s now easier to get a sense of the lay of the land in Sydney’s central business district. 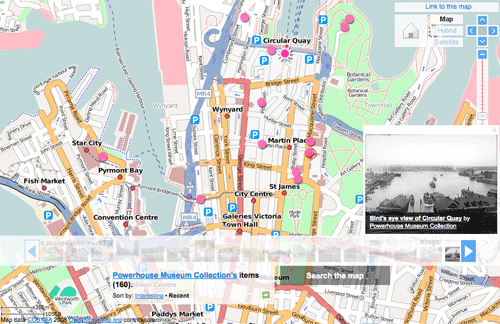 Wishing you a good and sweet year. Photos from The Library of Congress and RonAlmog.

Welcome to the fifth installment of 5 Questions. In our last interview, Eric selected Maciej Dakowicz. With a quick hop and skip, we’ll cross the […]