“Jerry Seinfeld, Ellen DeGeneres and Chris Rock. These are just a handful of comedians we love to see live on stage.” says photographer Dan Dion.

One of Dan’s favorites was Zach Galifianakis. The photo was shot at the height of his fame, right after ‘The Hangover’.

“He ended his set by ripping off his outer clothes, to reveal that he’d been wearing this Annie outfit all along,” Dan says. “Zach’s sense of irony and absurdity is so cute, that he’s perfectly happy in a dress with furry legs.”

“In my career, I’ve been so fortunate to see and meet many of them backstage,” he tells The Weekly Flickr in the accompanying video. “And I know what they’re really like.”

“I saw my first standup show when I was 14 years-old and developed a huge respect for it,” Dan says. “I love their art, their craft and I think what they do is magical.”

Dan started work as a portrait photographer when he was 18 years-old. After college, he established himself as a performing arts portraiture of comedians, taking promo shots at comedy clubs. A few years later, Dan became the house photographer of the legendary San Francisco Fillmore at the age of 24 years-old.

“Comedians are the smartest people I know,” Dan admits. “They are the best conversationalists and they’re great to hang out with. Their expressions, their smiles, their life lessons that have made them who they are and got them where they are now. It’s great.” 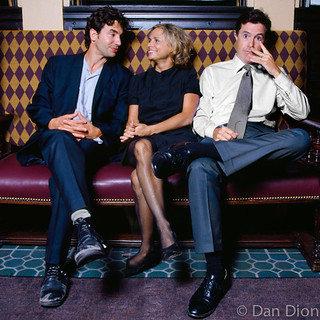 Dan’s approach to his shoots is unique. He doesn’t ask them to do wacky and outlandish things. Instead, he develops a trust with them and in turn they trust him.

“So often photographers make comedians look like clowns, but if you can make them look smart, you’ve got a friend for life,” Dan says. “The best time to shoot is right after they get off stage. It’s when they let their guard down, when they stop mugging. I like to just be relaxed, hang out for a little bit, talk about their friends. I want the shot when they are who they are. And before they know it, the shoot is over.” “Another of my favorites is Jerry Seinfeld,” Dan explains. “New York’s more elegant comedy club, Gotham is wrapped with my portraits. When Seinfeld saw the exhibition, he wanted to be a part of it, so when he came to Oakland, he agreed to a backstage shoot. When we shot, I felt like he’s the person you see in Comedians in Cars Getting Coffee. Relaxed, friendly, cooperative. He was very accessible, conversational, just a regular guy, hanging out, talking comedy.” Dan’s photographed over a thousand portraits and he admits he’s always prided himself on keeping his cool. But when he shot Steve Martin, a comedy legend to him since he was 13 years-old, even the most seasoned pro can get starstruck. “This was a very brief session but extremely memorable,” Dan recalls, “We talked about regular things, we talked about vintage banjos, San Francisco in the 70’s. He was very amenable, very professional.”

Dan loves his job because he feels he’s creating an archive of comedy.

“I’m not a comedian myself, but this has allowed me to become a respected part of their community,” Dan explains. “This is backstage. This is the lifestyle. This is comedy. What makes it even better is they appreciate what I do, which is more important than any audience member, magazine, or anything. And I love it!”

Visit Dan’s photostream to see more of his photos.