It’s no surprise most moms consider naptime their favorite time of day; relishing the few quiet and peaceful hours while their babies sleep, but California mom and artist Queenie Liao looks forward to the downtime for an entirely different reason. For Queenie, it’s the perfect opportunity to capture adorable and imaginative photos of her youngest son, Wengenn.

Photography became a hobby for Queenie when her first son was born in 2002. At the time, it was the best way to watch her son grow and send updates to her family. Like most new parents, Queenie took many pictures and continued to do so over the years with her growing family. In 2010, she came across the work of Adele Enersen, who took creative images of her sleeping baby. Adele’s work inspired Queenie to experiment with similar ideas with her third child, then three-month-old son, Wengenn. 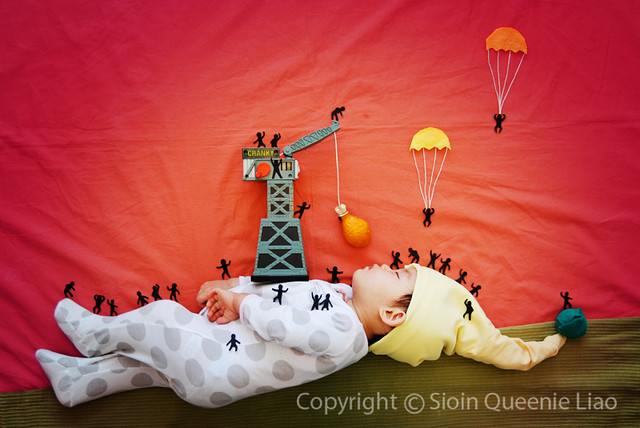 “As an artist, I always try to be creative,” Queenie says. “I love to think, observe and imagine. Anything around you can be a source of inspiration. Growing up, I used to love fairy tales and children’s stories. I used to imagine myself as the princess in these stories, meeting my Prince Charming. I decided to use this idea but have Wengenn be the main character in some of my favorite stories.”

First Queenie would come up with an idea — or as she calls it “an adventure” — for Wengenn. Next, she’d gather materials to create a background setting.

“I’d use mostly plain clothes, bed sheets, stuffed animals and other common household items,” Queenie explains. “After everything was set up, including putting Wengenn in the appropriate costume, I’d just wait. After he fell asleep, [it was] time to get to work!”

Queenie would gently place little Wengenn into the center of the theme she created and start taking pictures. Throughout the shoot, she’d be careful not to disturb Wengenn by always working around him. If he moved in his sleep, Queenie would simply reset and readjust the props. She also made sure Wengenn’s costumes were always snug, so he wouldn’t be uncomfortable and wake up.

“Overall, he’s a very good sleeper,” Queenie admits. “This made my job much easier!”

From exploring castles in the sky to being abducted by a UFO, the little guy has been on many exciting adventures!

He flew on a magic carpet ride through the desert.

And he even conducted a high profile interview with President Barack Obama!

Today Queenie has taken over 100 photos — a series she calls “Wengenn in Wonderland.” One of her favorites is an image of Wengenn climbing a ladder and reaching for the stars, called Starcatcher.

“Starcatcher is my favorite because, to me, the stars are symbols of dreams and goals in life,” Queenie says. “I really want to see him grow up, reaching all his goals and dreams.”

Over the years, Queenie’s work has garnered a lot of attention. After posting the photos online, she received thousands of views in just a few days. She’s also received emails from fans asking for prints, calendars and photo books.

“I’m very grateful to have this opportunity to share with the world,” Queenie says. “Not just my pictures, but more importantly my love, joy and pride as a mother creating this special album for my son. I think taking pictures is a wonderful way to spend quality time with your baby.”

Queenie’s advice to other parents:

“Take lots of pictures, because they grow really fast,” Queenie says. “Be creative. Enjoy the process and have fun. It’s the work of love, and your kids will treasure them when they grow up.”

Visit Queenie’s photostream to see more of her photography.

Our last Flickr Friday theme was #GettingCloser. This is a selection of our favorites from your submissions. Life shows a magical side as we get […]