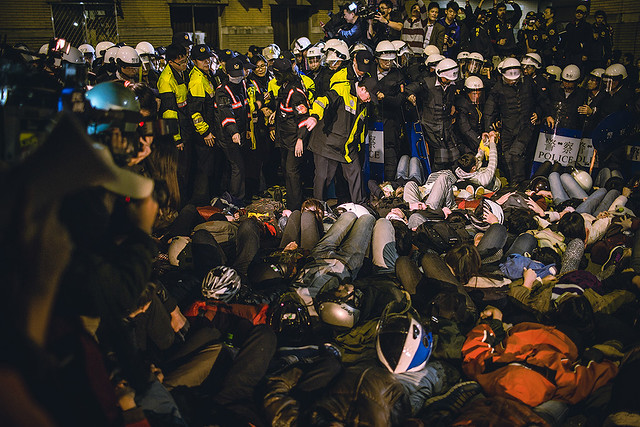 Taiwanese protesters — most of them students — rallied in Taipei to protest against a proposed trade agreement with China. The agreement will open the service sector of both countries to each other. While Taiwan’s President Ma Ying-jeou believes that the trade pact is a necessary move for his country’s economic health, those who oppose Ma are concerned that collaborating with China may lead to losses in their democratic freedom. Demonstrations have been ongoing for five days at Taiwan’s government buildings and surrounding streets before the legislature votes on the pact. And on Monday, the police used water cannons and batons to disperse the occupying crowds. According to AP reporting, 137 people were injured in the rare violent political conflict in Taiwan.

Read more about this incident on Yahoo News: Police move in on Taiwan protest over China pact

Young lovers, cute couples, and strong relationships. In this selection of some of your favorites we tried to capture the heartfelt emotions that were also […]

Enjoy this selection of creative fine art photography you submitted to the #Flickr10 group in celebration of our 10th anniversary. You conquered the elements flying […]