Have you ever had that moment when you see a child’s face light up with pure joy… but realize you forgot your camera? San Diego’s Angela Bonser has dedicated much of her photography to make sure her child’s moments of bliss are captured in a special way. The mom of two has taken hundreds of heartwarming photos of her youngest daughter, Haylie, dressed like a princess at Disneyland, and Angela handmade her daughter’s costumes, making Haylie’s experience even more memorable!

“It’s every little girl’s dream to dress up and play princess for [the] day,” she tells The Weekly Flickr in the accompanying video. “And the fact that I’ve ‘literally’ had a hand in making it happen for my daughter is everything to me.”

Ironically, Angela never liked to sew. But during her motherhood, she discovered that dressing her oldest daughter, Ashlie, in pretty dresses and taking photos of her was becoming overly expensive! 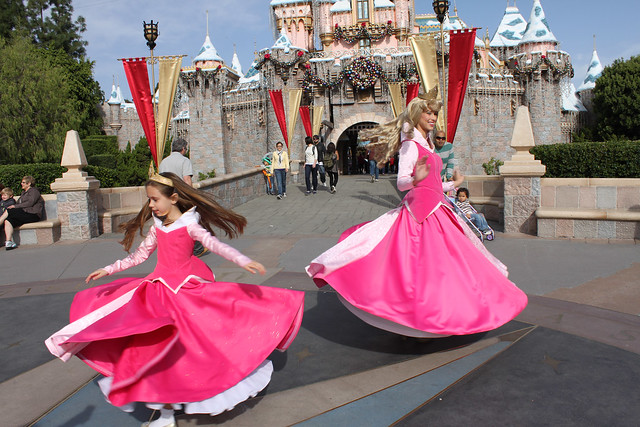 “One Christmas, when Ashlie was a one-year-old, my mom went out and bought me a sewing machine and said, ‘It’s time. You’re going to learn how to sew,’” Angela recalls. “I did NOT want to learn how to sew, but I decided, ‘Okay this is the time, I’ll just do it.’ So I went out, bought all the supplies I needed and made my first dress. From then on, shockingly, I was hooked!”

“I couldn’t stop sewing!” Angela says. “I sewed mainly dresses for my daughter. I loved taking her out on photography sessions, so I could record her cuteness and also my creations. When I found out in 2002 I was pregnant with my second daughter, Haylie, I was so excited knowing I had another child I could sew for!”

In 2009, Angela and her family moved to San Diego. And a few months later, they took their first trip to Disneyland.

“One of the things I noticed was the amount of little girls running around dressed like Disney princesses,” Angela recalls. “I thought that looked like so much fun, so I convinced my youngest, Haylie, to be Snow White for Halloween that year. I had always wanted to make that costume, but now I was extra determined — thinking she could wear it at Disneyland and have even more fun with it.”

When Angela returned to Disneyland a few months later with Haylie dressed in her Snow White costume, the response was overwhelming.

“Everywhere we went, people were dying to know where she got that dress,” Angela says. “Most people thought I must have paid hundreds of dollars to have it custom made, or that a grandma had made it! I guess I didn’t look like someone who knew how to sew. People were always shocked when they found out I made the dress.”

Angela recalls the Disney cast members loved seeing Haylie in costume. Many of them played along acting as if she was a really princess. In return, Haylie too loved playing along with the characters. Angela described it as an incredible moment.

“My daughter had so much fun on that trip, and I just thought, ‘We can keep doing this, and I can keep creating. It’s like getting to sew costumes all the time, which was my favorite kind of sewing anyway’”, Angela says. “I also thought it was such a fun way [for Haylie] to experience childhood — given the reaction of the cast members and everyone at Disneyland… so I decided to keep doing it!”

Angela drew inspiration for making the costumes from many different places. At times, it was from the beautiful fabrics she’d find while out shopping. Other times, she’d pick her favorite characters either she or Haylie would come across at Disneyland.

“I’ve done Alice, Rapunzel, Cinderella, Aurora, Jedi, Giselle from Enchanted — you name it,” Angela says. “By far, the most challenging dress I ever made was the green Ariel park dress. Finding the fabrics was very difficult, but I remember scouring online, and I actually found the exact same trim that Ariel used on her dress. It was so great to see it come together.”

Angela’s favorite costume she ever made happened to be Haylie’s as well – Mary Poppins.

“I remember when we got to the park. We hadn’t even entered yet, but the reaction of all the other people in line was just overwhelming,” Angela remembers. “No one else had ever seen a little tiny Mary Poppins before. That’s not something you can buy. People were just blown away.”

“[When] we got into the park, we looked over and saw Burt coming with this big huge smile on his face,” Angela says. “Haylie ran up to him and gave him a huge hug and those two danced like she was really Mary Poppins!”

“When Mary Poppins finally came out, the look on her face was just precious,” Angela recalls beaming.” She was so excited, and they just bonded instantly!”

The most memorable moment for Angela was when Mary Poppins and Burt took Haylie on the carousel. Haylie got to ride Mary Poppins’ very own horse, Jingles — who’s infamous at Disneyland.

Throughout the years, Angela has received many requests to sew costumes for other children for money. However she’s refused every single time.

“That’s not something I ever wanted to do,” Angela says. “I never wanted to make it a job. I just enjoyed my daughter being the only one with that costume — something that’s uniquely her own.”

“Haylie had so much fun immersing herself in the characters and making so many friends, both characters and park guests,” Angela says. ”For her, it was years of magical and wonderful Disneyland memories that she will never forget. I think she will always remember her mom running backwards, trying not to fall off a curb, or not to run into someone, snapping pictures like a crazy woman not wanting to miss any of these amazing moments!”

“I’m just shocked at the joy that my photos and my costumes have brought to other people,” Angela admits. “I really thought it was going to just be something personal for me and my family, but it seems like they truly have spread joy to so many people.”

Visit Angela’s photostream to see more of her photography.

This week’s theme for #FlickrFriday is all about detachment. Whether it’s objects, furniture, old clothes, or even feelings, next week, we want you to get […]