After rediscovering himself in the great outdoors, the hardest part for Ryan Dyar might be coming back to civilization. The outdoor enthusiast is comfortable waiting out the perfect photo in the wilderness of Montana, Oregon and beyond. 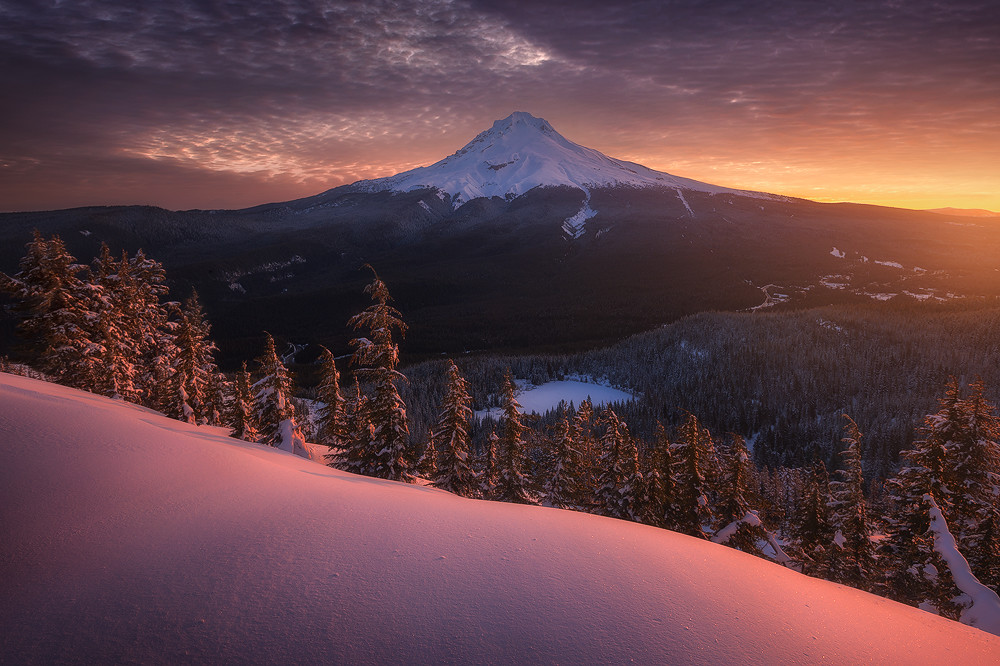 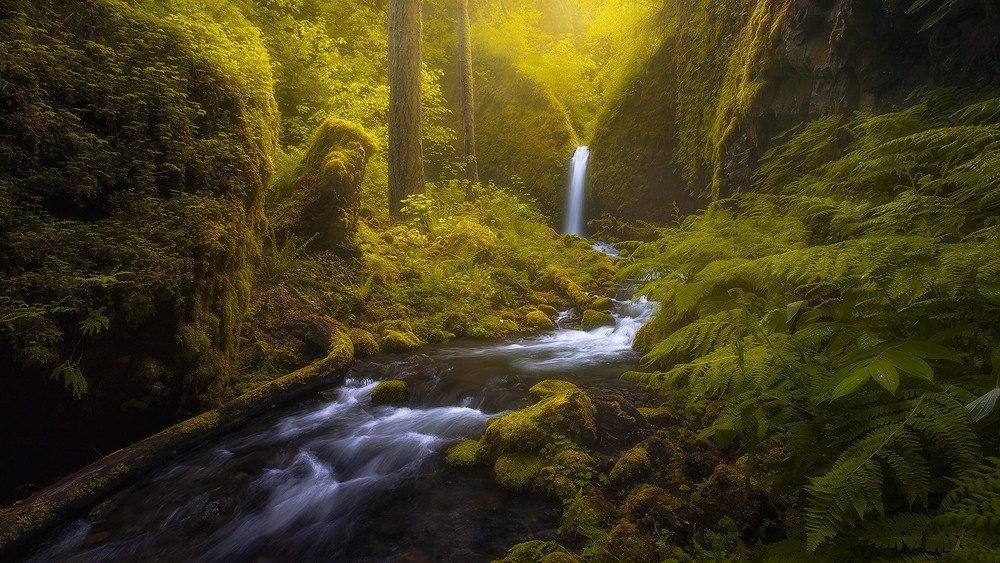 Ryan Dyar has been chased by bears, nearly stranded in a sandstorm in Death Valley, and has been lost in the wilderness for hours in the middle of the night. But based on the end result, we’re not complaining. From Glacier National Park in Montana to Mount Hood in Oregon to lava flows in Hawaii, the Seattle-based landscape photographer and outdoor enthusiast endures the elements to capture picturesque images of nature — snow-capped peaks, mountain meadows, and lush forest waterfalls.

“As a photographer, I want to capture all the feelings and emotions that run through me while taking the image and put them into the photo. Feeling the cool morning breeze on my skin, hearing waves crashing ashore on the lake, squinting in the warm light of a summer sunset — these are things I try to portray in my work,” he says.

How does he do it? Ryan did a Q&A with us and chatted about his obsession with the mountains, his adventures in photography, and his dream location to shoot.

Well, not counting my high-school photography course, where I skipped class every day and only passed because I cheated and used my friend’s photos for my final project, it’s been about eight years. My childhood friends call me a hypocrite quite often.

How did you develop a passion for landscape photography?

It happened very organically. I was at a significant turning point in my life and lifestyle and just started to spend more time in the outdoors trying to “rediscover” myself, as cliche as that sounds. I started bringing a camera along on my ventures just to take snapshots, then it was the typical snowball effect from then on. I got bit by the photo bug. I never set out to become a photographer, but here I am years later doing it for a living.

What are your tips for ideal landscape photography?

Well, my ideal images won’t resonate with most other photographers, but I like strong and dominant foregrounds, warm backlight, a very fluid yet non-obvious “visual path” through the image, and a color palette that resonates through the whole scene. 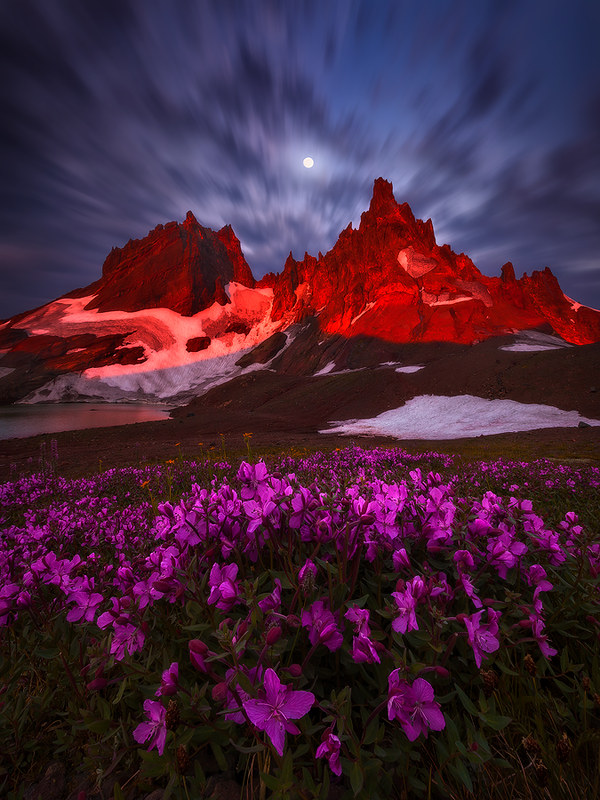 Where are your favorite places to shoot landscapes?

The mountains. It’s a strange addiction I have with them. I’ve been eaten alive by mosquitoes, been charged by grizzly bears, and gotten lost overnight while hiking alone in the dark for about 14 hours, but all my best times and favorite images are in the mountains. Montana has become my home-away-from-home for this reason. My girlfriend and I plan on retiring to a little place in the mountains out there.

OK, so I don’t make a whole lot of money. As a full-time landscape photographer, it’s expected. I make enough to put food on the table for my family, pay my bills, maybe save a few bucks and have a little extra for taking trips to make images. That’s the way it is right now, and the way it was when I took this shot.

Knowing that, I pretty much went destitute while making my image “Catching Sail,” a shot from the Mesquite Dunes in Death Valley. Temporarily dead broke in the middle of the desert, hundreds of miles from home. See, I’m the type of guy who doesn’t keep credit cards, because I know how I am … I have fiscally irresponsible tendencies. So when I planned a trip to drive from Portland, Ore., to Death Valley, Calif., for some shooting, with plans of heading on to meet fellow bachelor friends (at the time) in Las Vegas, I had no cash on me, no credit cards — just the debit card for my checking account. Zero backup money.

Cut to the chase, the first half of my trip is spent shooting — shooting in these dunes, getting this image, in the worst sandstorm I’ve ever been in. Absolutely howling winds nearly knocking me off my feet. Winds that cover those same footprints in the sand within seconds. Winds that made me buy the largest, most obnoxious sunglasses ever at the nearest gas station, just to shield my eyes from the stinging sand. I stood there, merrily shooting away, when I thought to myself, “I need to take a cell phone shot of myself to put on Facebook. Girls will dig it.” (I was single at the time, but still, no chicks cared.)

Well, when I paid for my new awesome (obnoxious) sunglasses an hour earlier, I paid for them with my only source of money — my debit card. Instead of putting the card back in my wallet, I put it in the pants-pocket I keep my phone. So when my vain self pulled out my iPhone to take a stupid, self-congratulatory selfie, my card came out with it. Thanks, friction. Out it came, catching the wind like the grandest of sails. A sail that could have steered the Titanic away from the iceberg. It vanished into the distance. Up it went and down my spirits went. I can no longer go to Vegas, no longer have fun. I can’t even afford to drive home at this point. I’m absolutely screwed.

In a desperate act, I walked. Not back to the truck, but towards the direction my life savings went. Up one sand dune, down the other side. Up another, down another. I turned on my head torch, as the sunset had faded and it was growing dark. Boom, there it was. Twenty minutes of searching and 100 meters away, in the dark, over a couple sand dunes — half freaking buried in the sand — my light caught the reflective Visa logo. My trip was saved, my money was back in my pocket, my whole world was put back together.

I lost most of that money playing craps in Vegas three days later. More than I’ll admit on the Internet where my mother could potentially see it. 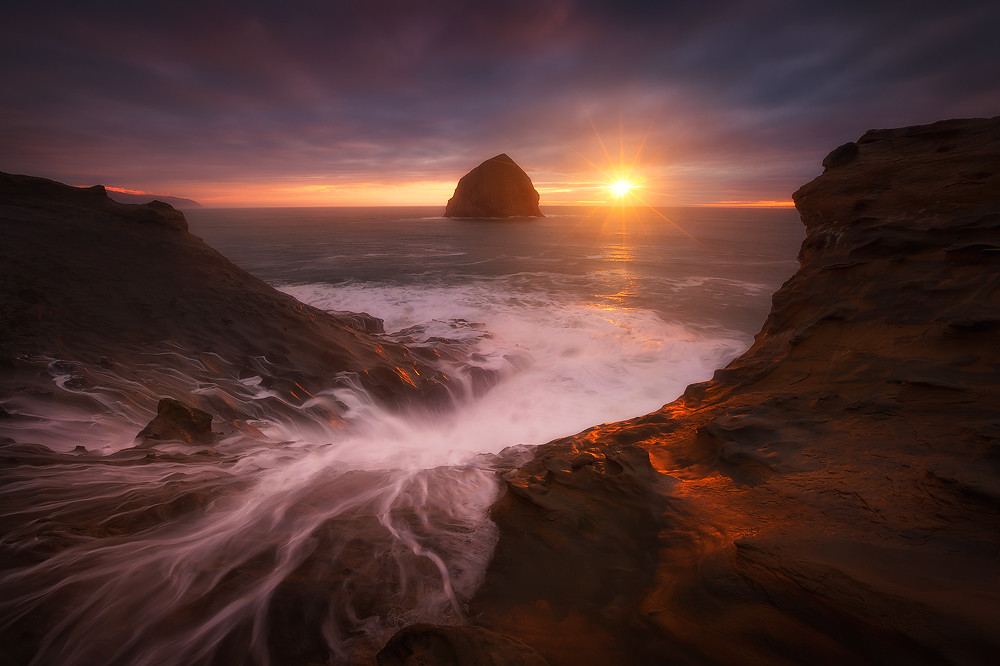 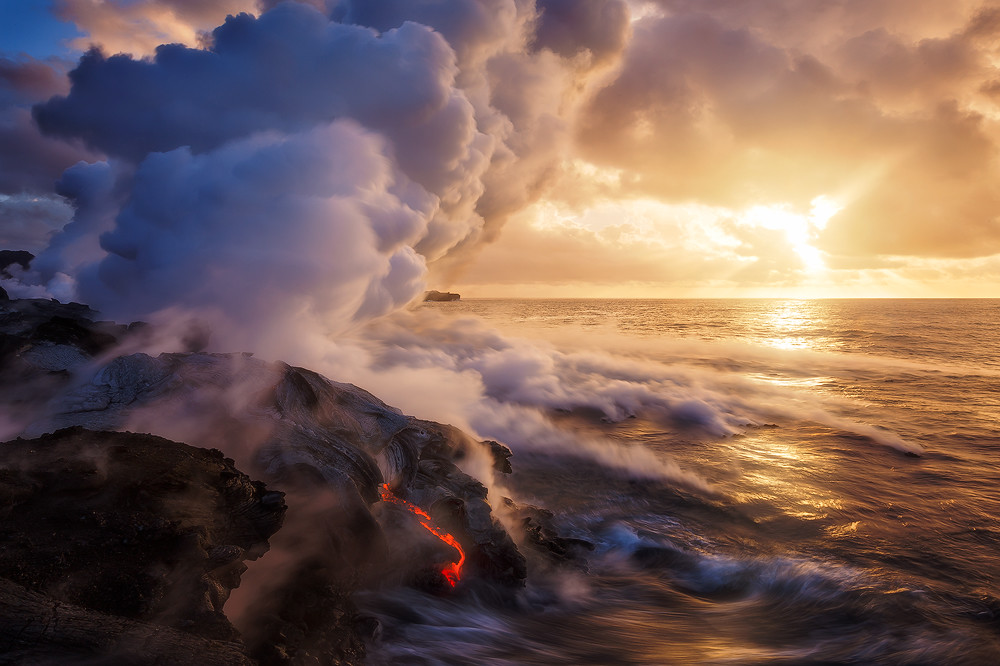 Most people would say “just be yourself.” I don’t necessarily agree with that advice for most beginners. I think learning art and getting excited by art is fueled by inspiration. Nobody picks up a guitar for the first time and starts writing music — they learn chords, jam to some favorite songs and get the feel for the craft first. Same goes for photography in my opinion. Let yourself be inspired by what you like to look at and then form a Frankenstein monster out of it and mold into your own style.

The Alps. I’d love to spend a year in the Alps shooting and traveling with some of the awesome European friends I’ve made through photography.

What kind of camera/equipment do you use?

I’m using my old and beaten-up Canon 5D Mark II, 16-35mm f/2.8L II, 24-105mm f/4L, and a 70-200mm f/4L. Gitzo tripod legs, my beloved Really Right Stuff BH-55 ballhead, and a circular polarizer. I also use a hot-shoe mounted bubble-level and a cable release that is falling apart and might electrocute me at some point with its exposed wires.

What, if anything, do you do with your photos in post-production?

In post-production, I utilize techniques like exposure blending and focus blending to overcome the shortfalls of my camera and lenses. These are things that help the scene have the same light levels and focus abilities as our own eyes. I also like to use a lot of dodging and burning, which have been techniques in image production for almost as long as photography has been around.

I also use techniques to add contrast and control luminosity. I’ve been stitching a lot of panoramas lately, but I normally do this with large, vertical wide-angle compositions (for example, my image “The Torch”) to fit a larger field of view into a small frame.

Mostly how excited everybody is about photography still. Many sites are “popularity contest” driven. Flickr is just people being stoked on photography and wanting to share, learn and associate with like-minded people.

Well, I met one of my best friends in the world through Flickr — Miles Morgan, a.k.a. mm767cap. We both met in the infancy of our photography, sharing messages through FlickrMail and deciding to meet up to shoot a sunrise together one day. He and I have learned photography together and had some of the best times of our lives together shooting. So I guess a lot of what I learned is friendship, being open to conversing with other members and taking the time to check your FlickrMail often enough to meet rad people! 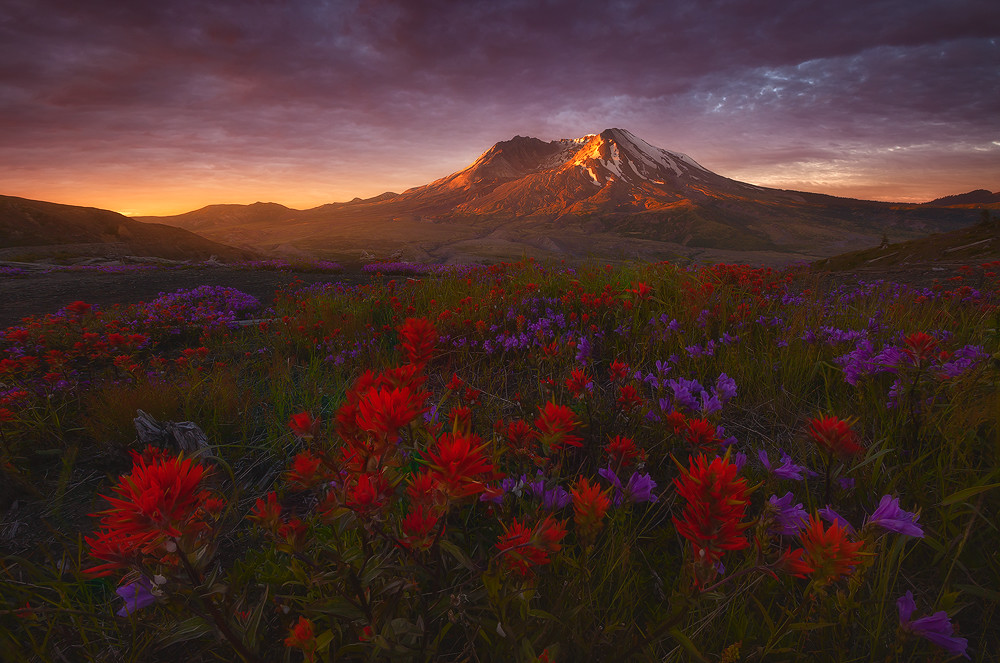 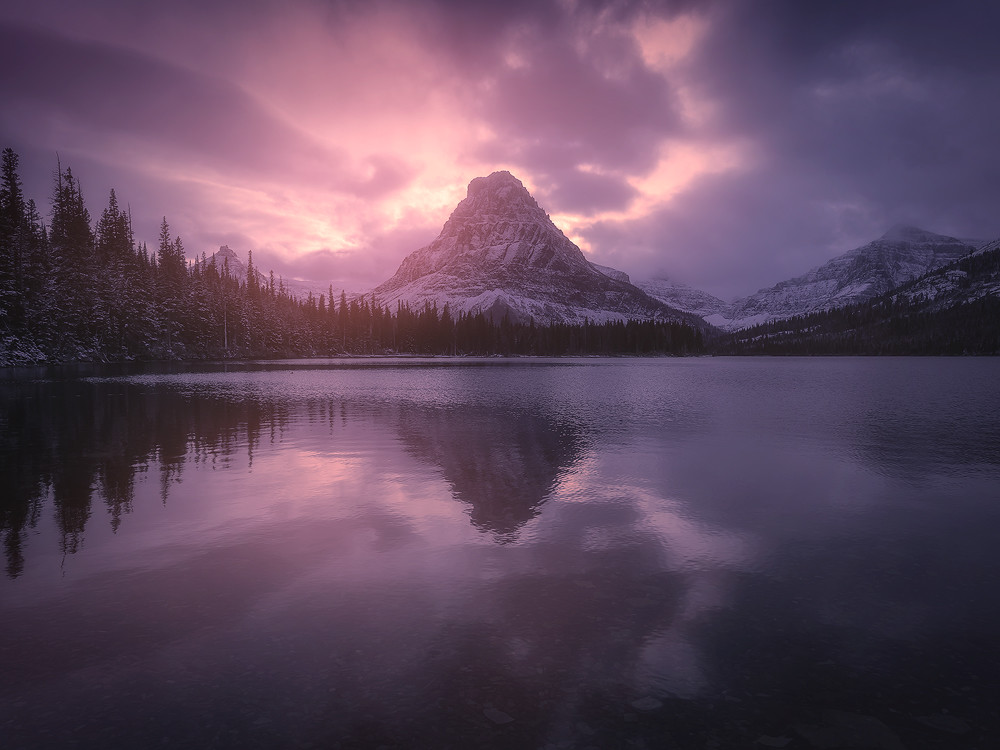 Thank you for answering our questions, Ryan! To see more of Ryan’s work, explore his photostream or check out his website.

We were surprise how much many of you were in sync about your selected topics. You easily found #Silver in the world around you, and we are very happy to see how beautifully you captured its presence.