As has been widely reported over the past few days, we’ve released data for 2013-2014 showing camera ownership trends among Flickr members. With this blog post, we give you more detail about the data and let you parse the minutia.

This analysis goes from the period of January 2013 to mid-December 2014. We estimate camera ownership per-week by only counting a camera once per-account, per-week, to compensate for community members uploading different quantities of photos.

This analysis offers an estimate of camera ownership by brand and cameras all together, and then looks in detail at mobile cameras, mirrorless and DSLR cameras. 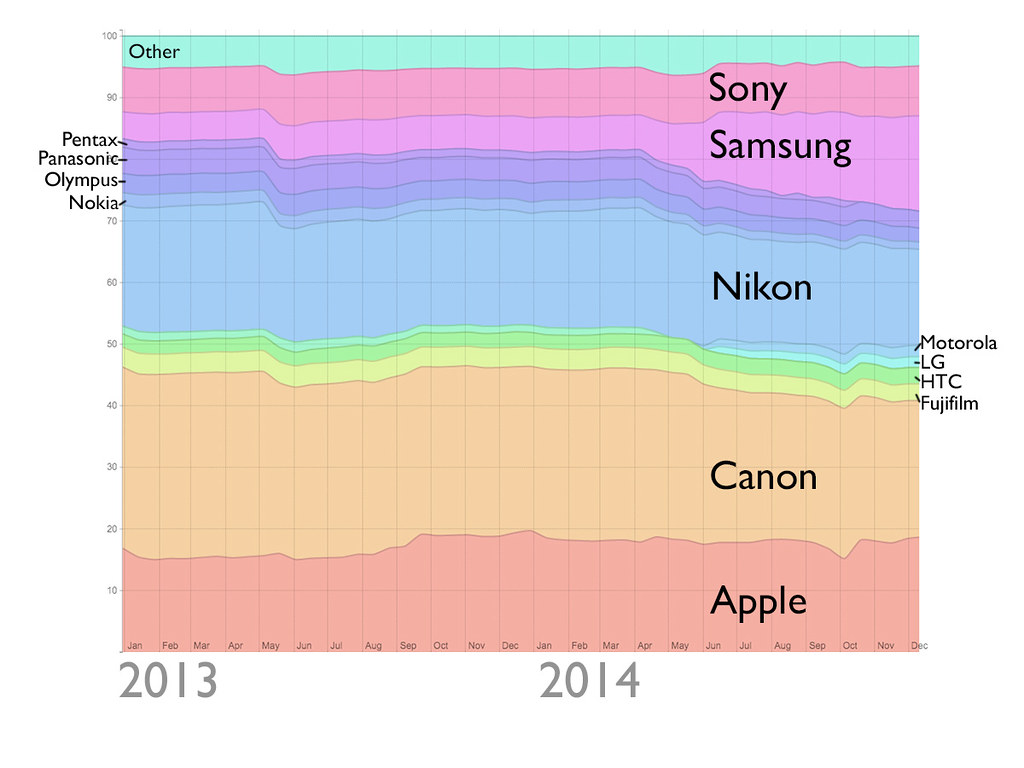 Overall, Nikon and Canon steadily held on to their share of cameras on Flickr. What changed was that the big two smartphone camera manufacturers, Apple and Samsung, which moved up the chart.

Mid-2014 is where most of the significant changes happened. Kodak dropped from 1.5 percent to off the chart entirely, but the biggest change was in the cameras using the Android operating system. In the last 6 months of 2014, Samsung saw growth from 6 percent weekly use, to nearly 15 percent, and both LG and Motorola came on to the scene at nearly 2 percent each, close to their older peer, HTC, which held steady at around 2.5 percent. 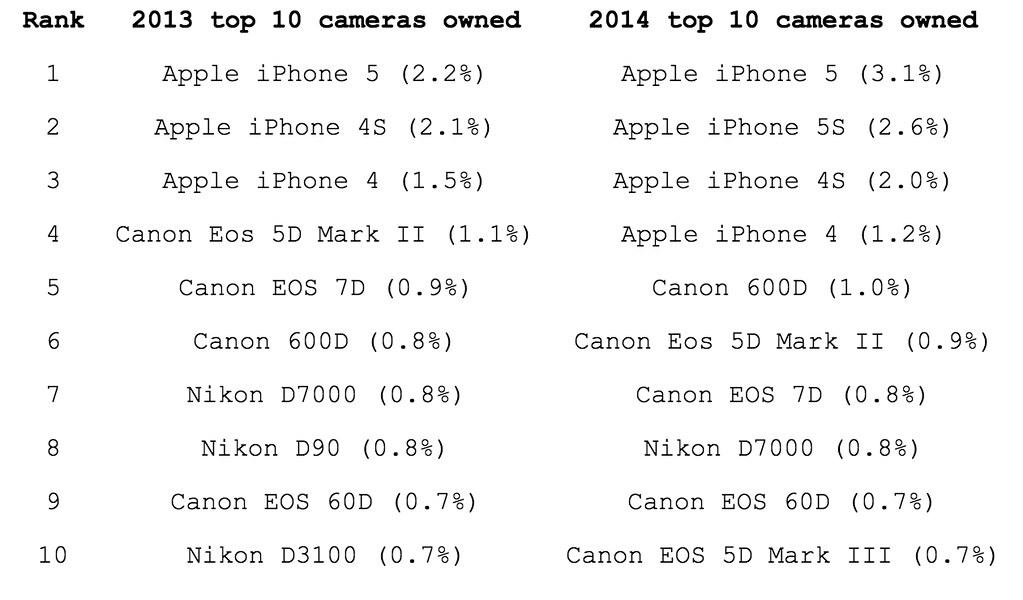 When comparing all the cameras on Flickr, the iPhone 5S, 5, 4S and 4 have consistently been the most popular on Flickr over the past two years. While Nikon and Canon remain very popular, they offer a huge range of individual cameras and the overall popularity of individual models likely is lost in the diversity.

Outside of smartphones, the next most popular cameras are all classic DSLR’s. The full-frame Canon 5D MkII is the next most popular camera outside of smartphones in 2013, but took second place to the Canon 600D (T3i in some locales). Entry to mid-level DSLRS round out the rest of the top 10 (all APS-C) with the exception of the Canon 5D MkIII which makes an appearance at the bottom of the top 10 for 2014. 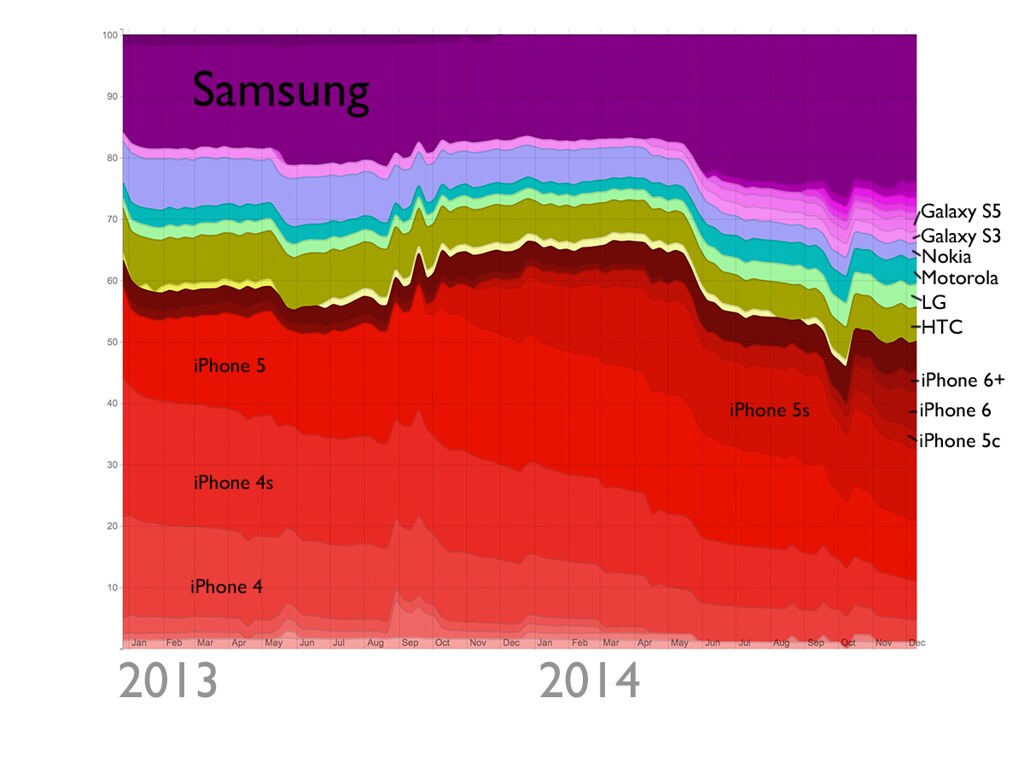 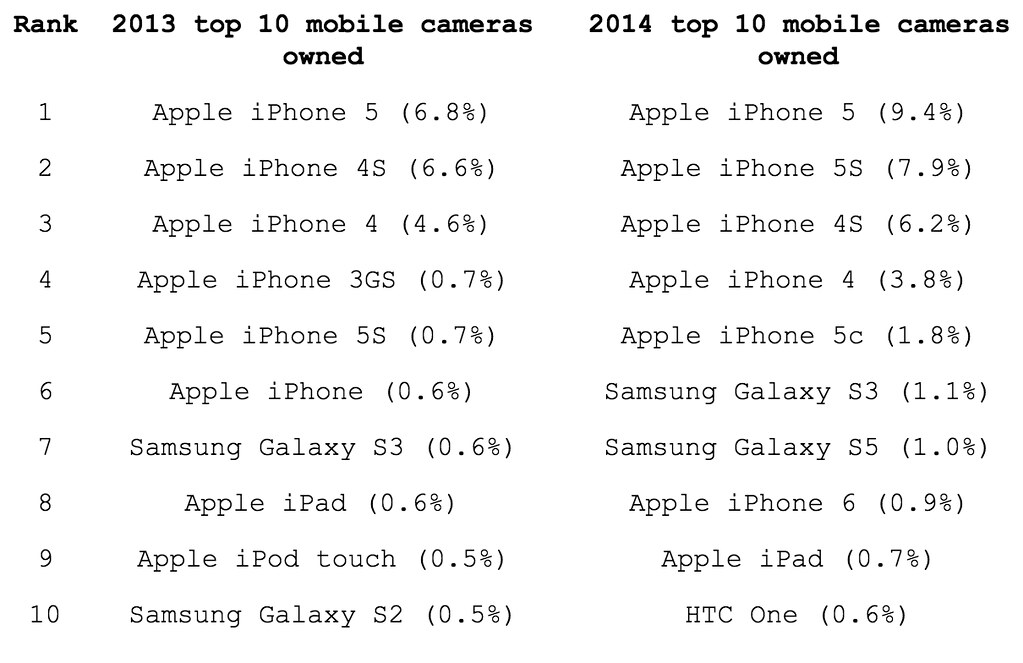 For all of 2013 and well into 2014, Apple made up 60% of the mobile cameras owned on Flickr, with, as mentioned earlier, the iPhone 5 taking the biggest share. However, mid-2014 saw a dramatic change, with Android camera phones gaining a 10-15% share of camera usage. Samsung in particular grew strongly, the Galaxy S3 and S4 contributing significantly to the brand’s popularity.

Nokia started out at 8% weekly of the cameraphone share but has been steadily declining, at a bit below 3% weekly at the end of 2014. 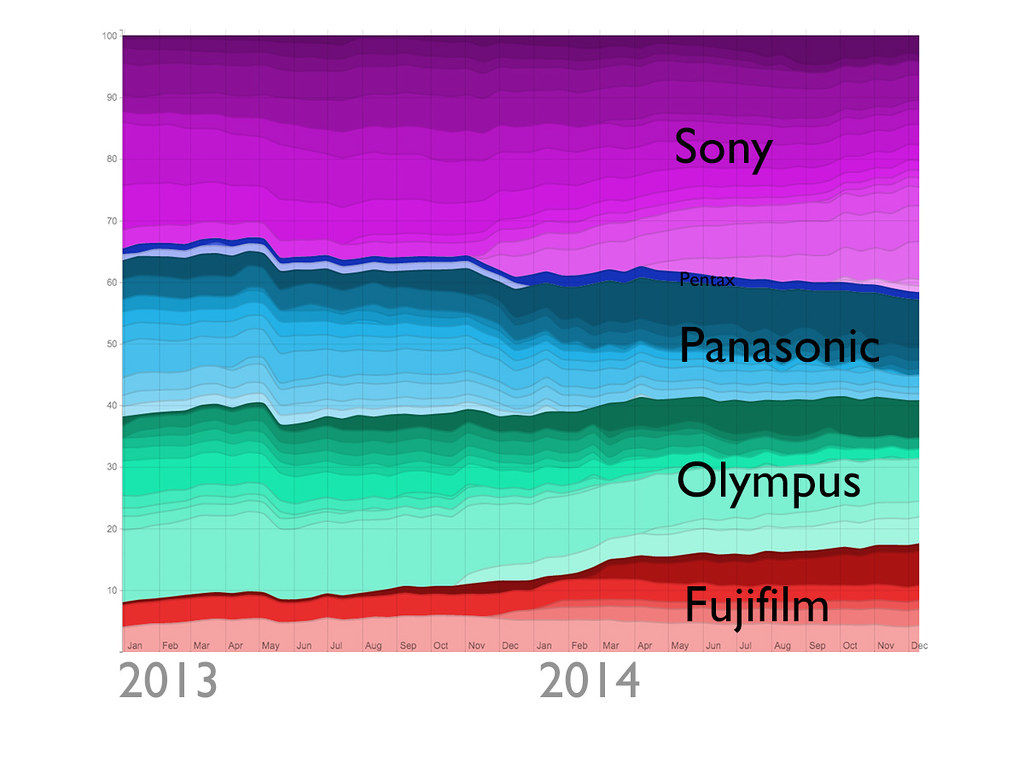 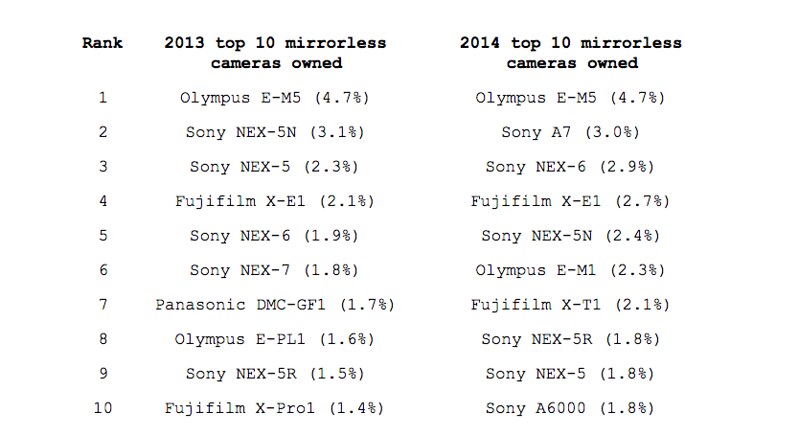 For both 2013 and 2014, the most popular mirrorless camera by far was the Micro 4/3 Olympus E-M5, and by 2014 it was one of two Micro 4/3 format mirrorless cameras in the top 10. The high-end, full-frame Sony A7 took the second spot, followed closely by APS-C contenders Sony NEX-6 and Fujifilm X-E1. 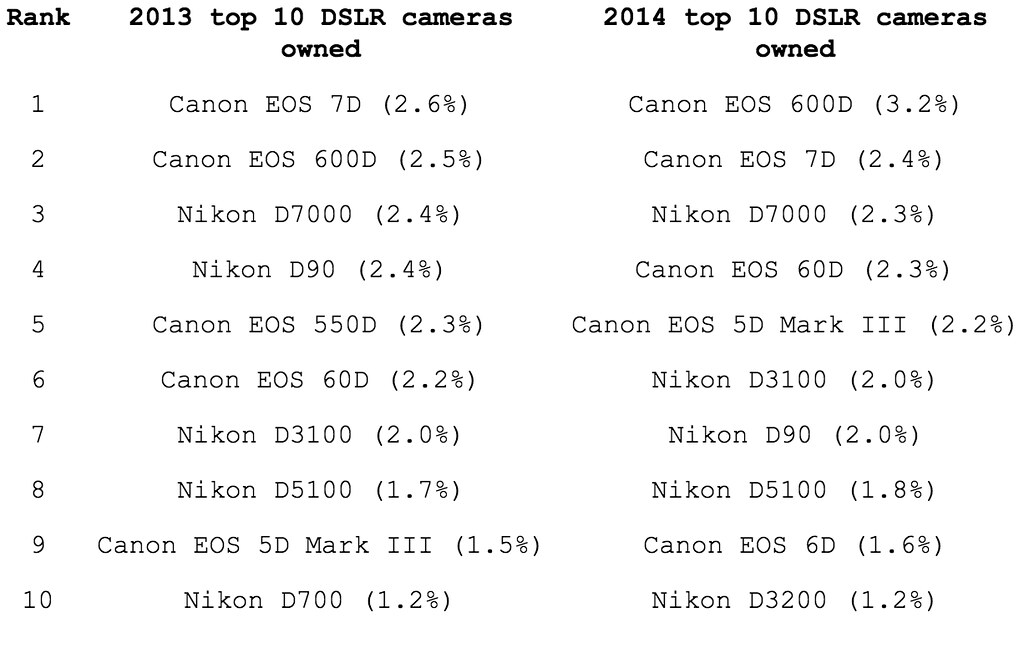 Within DSLR’s Canon, Nikon and Sony were the top 3 contenders, holding steady at 55% weekly, 40% weekly and a bit less than 5% weekly (respectively) of the DLSR cameras owned on Flickr. The Canon 7D topped was first in 2013 and bumped to second by the Canon 600D in 2014. In 2014 the Nikon D7000 and Canon 60D jockeyed for the next two spots, with the Canon 5D Mark III being the most popular full-frame camera. Not just for professionals, there is a healthy selection of entry-level DSLR’s in the top 10 for both years, Nikon being more popular in this category.

This article has been updated to correct an error where certain camera types were under-counted.