A quick note on how we count cameras: we’re looking at how people take pictures they upload to Flickr, so for a given time period we only count each camera once per community member who uploads to Flickr. So for example, when looking at 2015, my two favorite cameras this year – my Canon 7D and its partner-in-crime the Fujifilm X-E2 – only get one vote each. We’ve also tuned how we count camera categories so some numbers changed around minimally compared to our post earlier this month.

Camera types
Looking at the trends over the past 5 years, we can see that Point-and-Shoot cameras are continuing their steady decline, losing their popularity to cameraphones. After a peak in 2012, SLR’s are being replaced by mirrorless cameras, which show a steady one-percent-per-year growth. These two camera types represent the solid, steady block of enthusiast and professional photographers on Flickr. 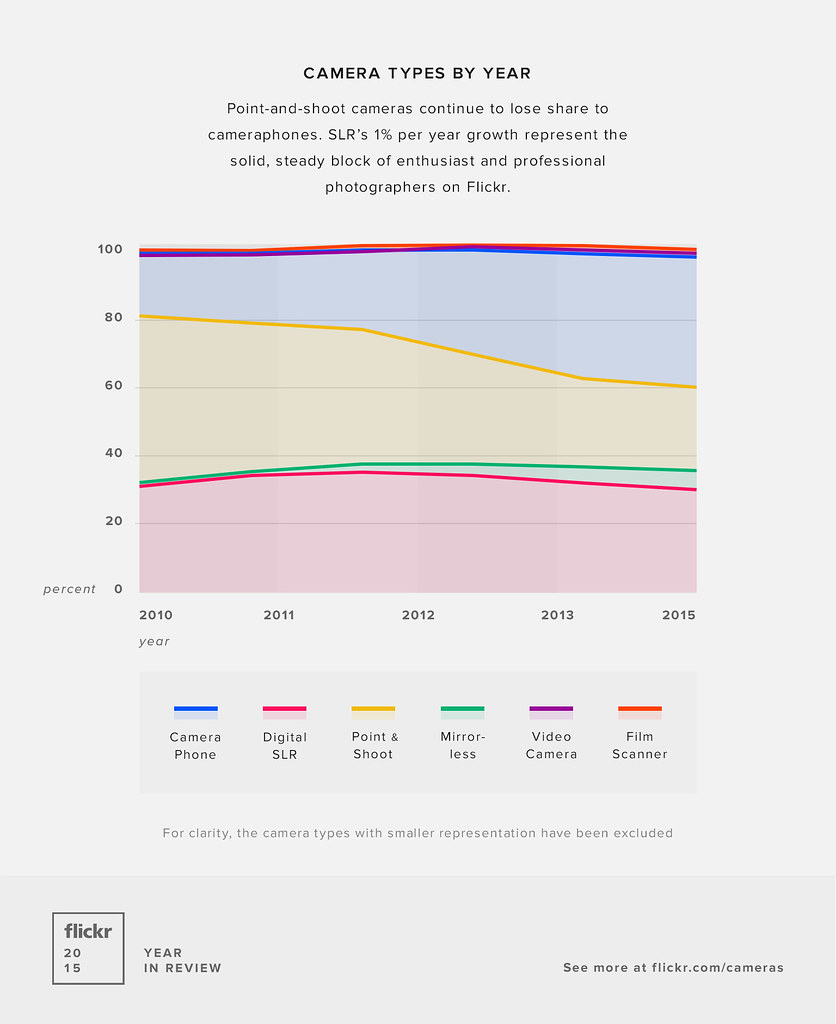 Flickr photographers are a diverse bunch, and many used two different types of cameras during the course of the year. Here we list the top-5 pairings of camera types (with a percentage of photographers who have this device pairing) in 2015: 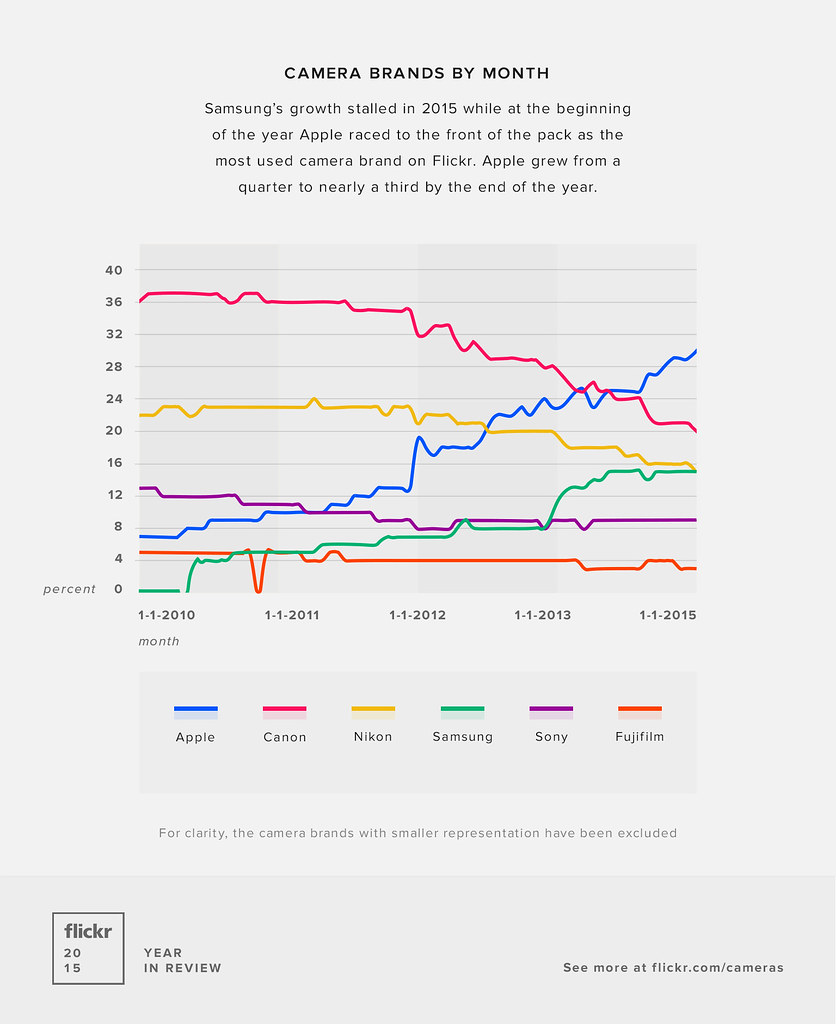 The rapid ascent of Samsung stalled out in 2015; however, at the start of the year Apple raced to the front of the pack as the most-used brand for taking photos on Flickr. Apple grew from a quarter to nearly a third by the end of the year. Canon’s share fell significantly and Nikon continued its slow decline; however the last two major players – Sony and Fujifilm – stayed pretty steady throughout the year.

Flickr photographers seem to have a strong brand loyalty, but a good fraction of our community is happy to use different brands together. In 2015, 18% of Flickr photographers used Apple and Canon together, followed by Nikon at 15%. 11% of the Flickr community used traditional rivals Apple and Samsung together. Unsurprisingly traditional cameraphone and DSLR pairings dominate this list. 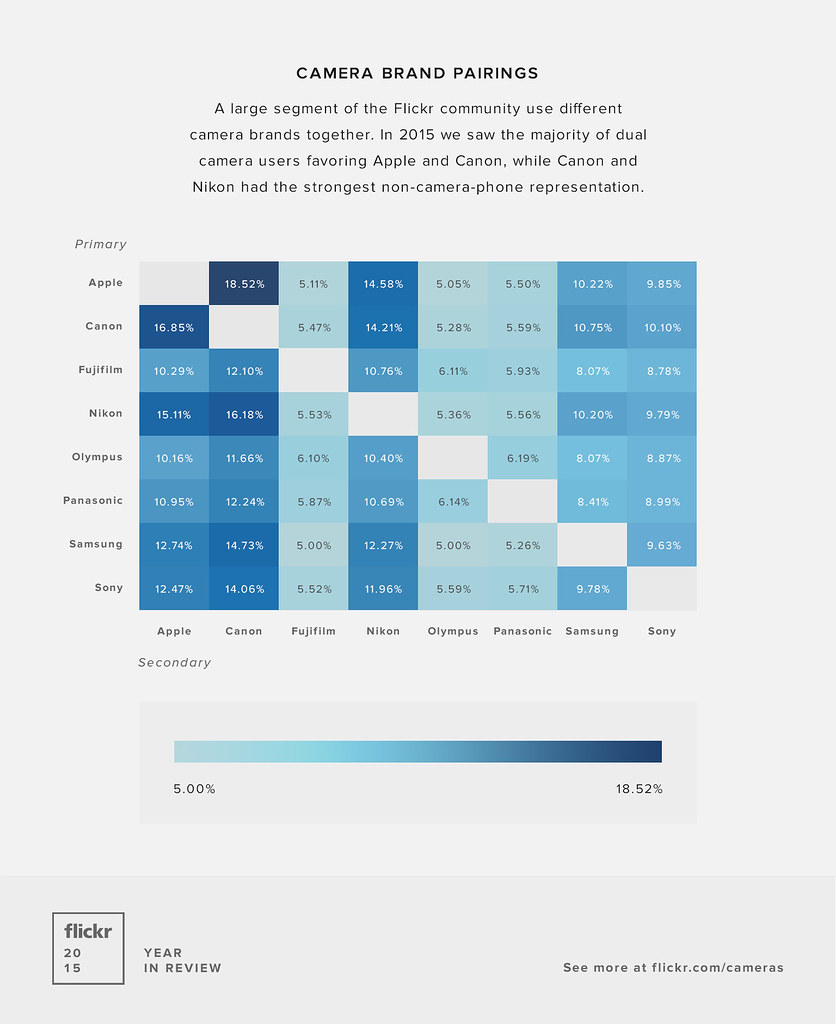 Cameras
As a reflection of its strong growth, Apple has dominated the top cameras used on Flickr in 2015; different iterations of the iPhone take 8 out of the top 20 spots. The long-lived Canon 5D Mk II hangs on at 7th place and its newer sibling the 5D Mk III is at 10th. Entry-level Canon Rebel T3i is at 9th place. The first Android device, the Samsung Galaxy S4, is at 11th and the first Nikon, the D90 is at 13th place. 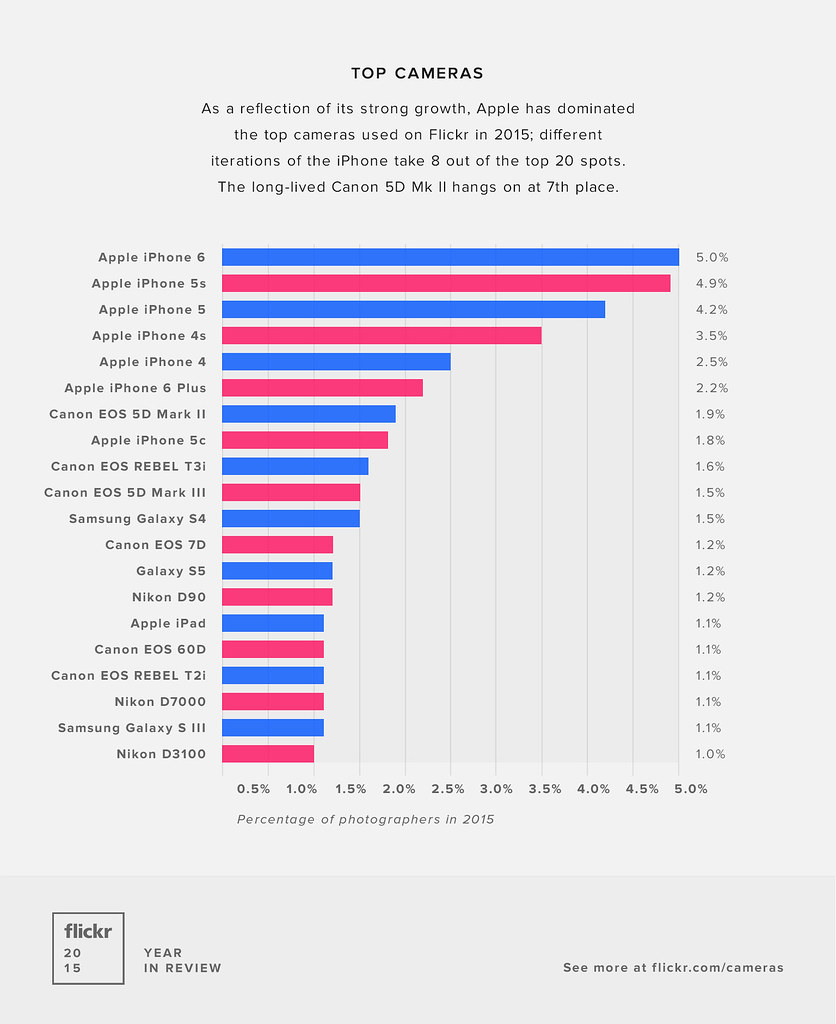 Cameras used together by our photographers shows some interesting combinations. Unsurprisingly, it shows that photographers who use one Apple device really like using other Apple devices; the top 18 camera pairings are iPhones to iPhones. The Canon 5D mark II and III is paired frequently with iPhones, and we even see a few Canon and Nikon combinations on the list. Taking out all but the first Apple-to-Apple pairing out of the table below for readability, we list the top 10 camera pairings (with a percentage of photographers who have this combination) in 2015:

Does your family have any special #ChristmasTraditions? Show us what you do to celebrate the holidays!