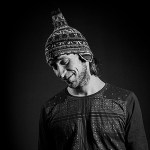 Light ninja Eric Paré, a Montreal-based commercial photographer, is building a community of light painters on the back of his inspiring work. The innovative group of photographers has followed his lead and drawn inspiration from barren landscapes, artistic models, and $2 plastic tubes.

“When I saw it in the camera I knew this was the thing. These $2 tubes were more impactful than the 360 rig, which cost thousands of dollars.” 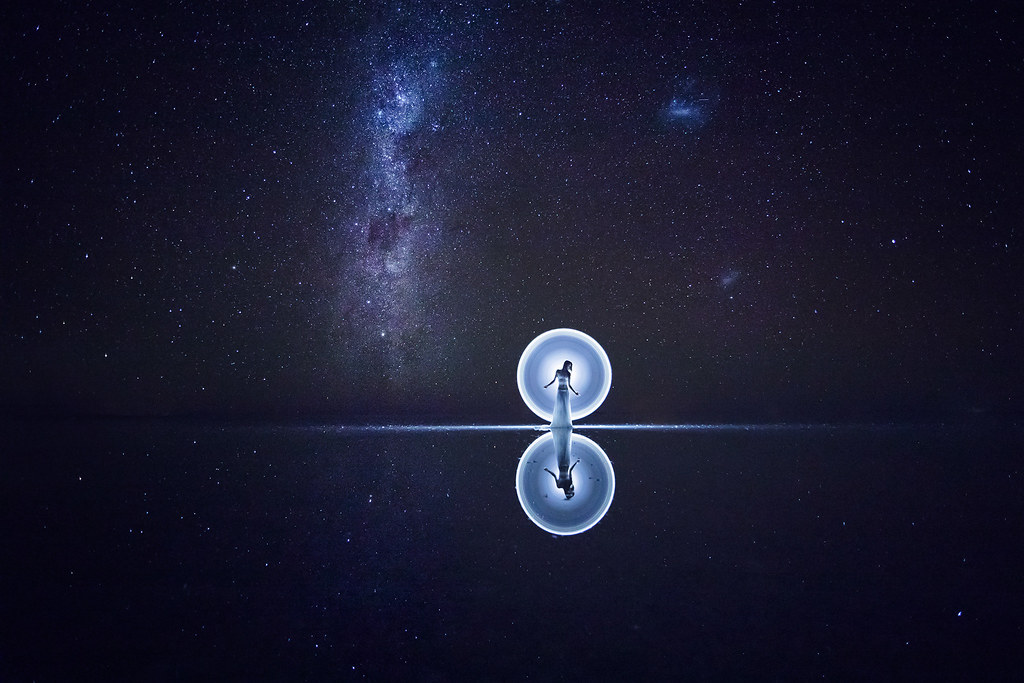 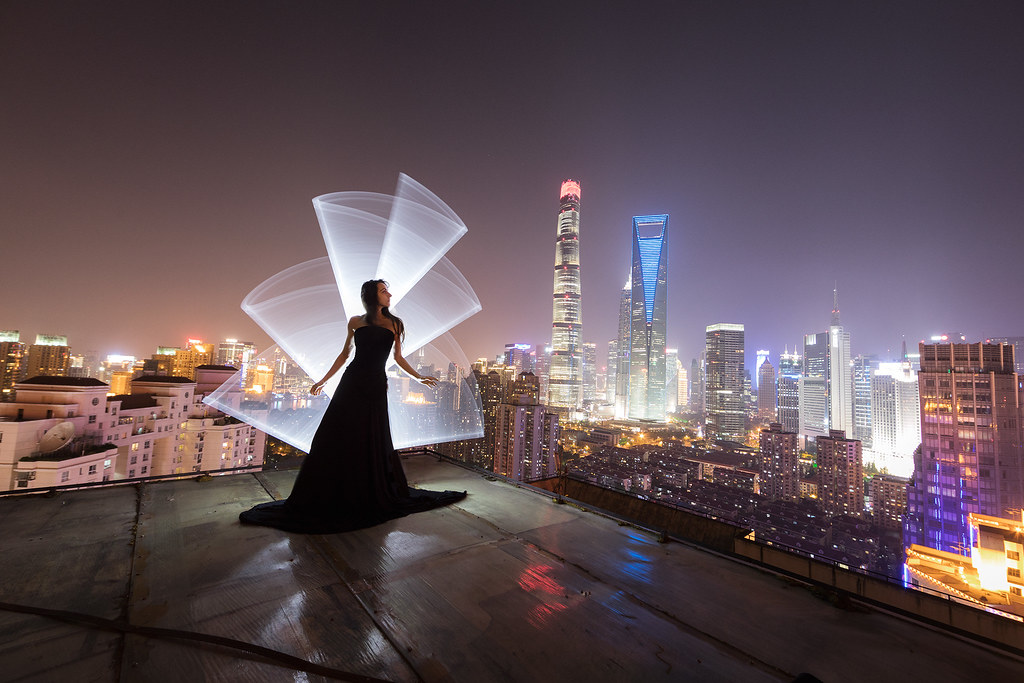 He and his team create a 3D image by combining individual shots from each camera on the rig (bullet time photography). Doing that for multiple images over a 1 to 6-second time frame allows them to create a short, 360 video (stop-motion). While dressed in all black, Eric wields a light source by hand to add a new element to contrast the model during the shots (light painting). 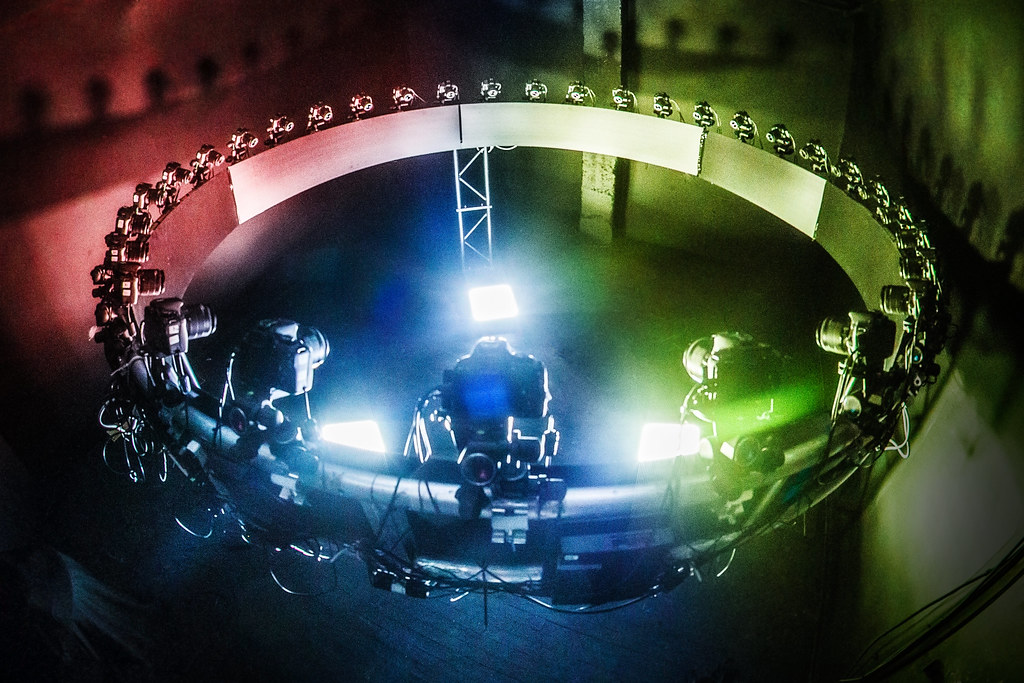 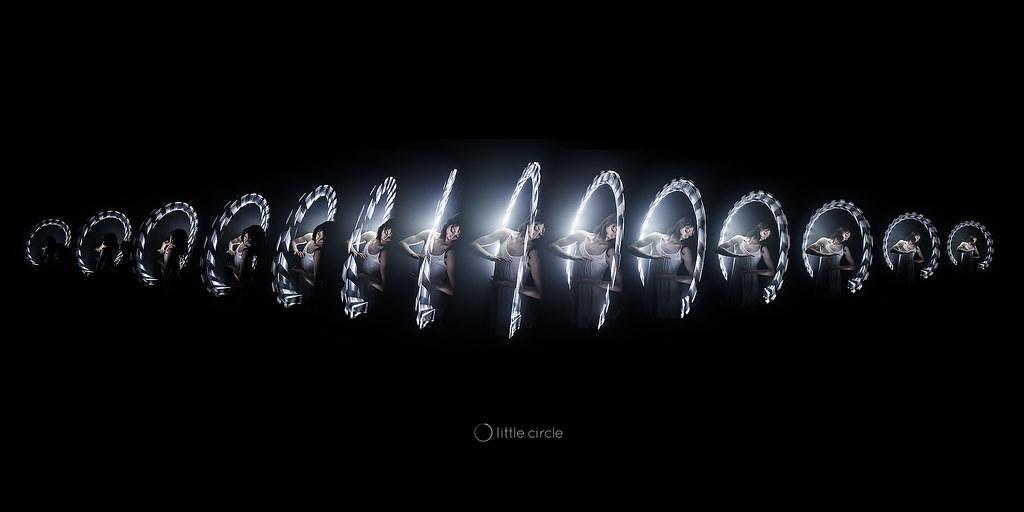 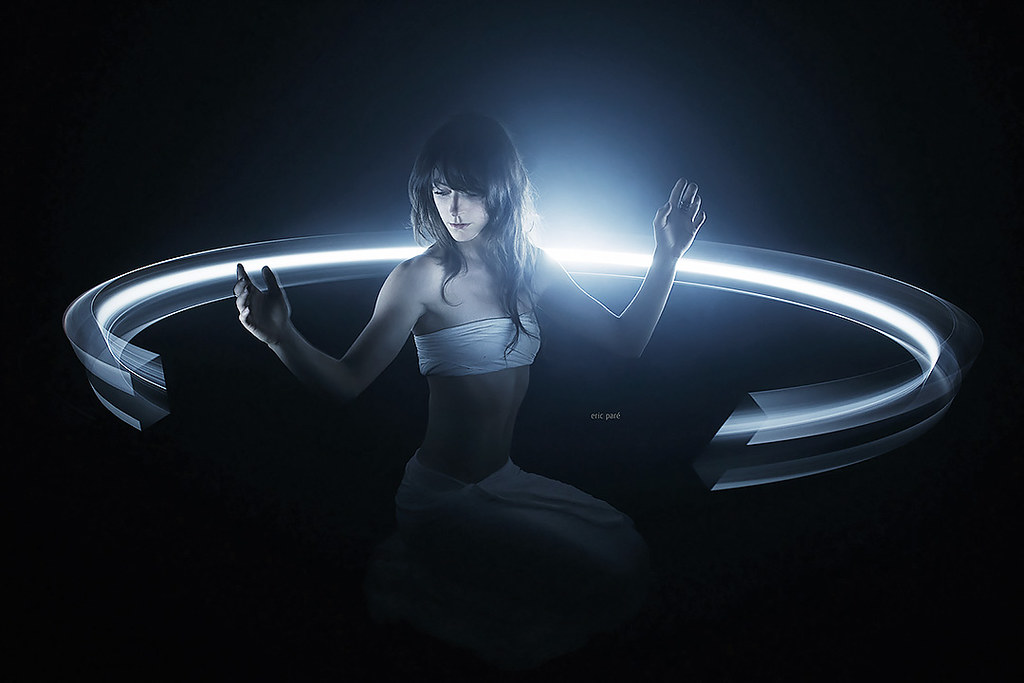 Eric has done commercial 360-degree collaborations and tours with technology brands like Adobe, Intel, Microsoft, and HP at events like South by Southwest, Coachella, and TEDxMontreal.

In his studio, Eric mostly worked with dancers. He described them as professional and effective. They can do amazing or intricate moves and hold poses with an athletic precision most individuals cannot.

“Most of the dancers I worked with were friends. The first time I worked with Kim in the studio she was so precise it brought a clarity to the project.”

A year later the two worked together again, spending five nights in the studio experimenting with lights, poses, lighting props, and the last shot (a long exposure using a light tube) yielded a circle of light, a tube halo. They knew they had something.

Since then everything outside of his commercial 360 work has been about the tubes. Eric and Kim have traveled thousands of miles, taken thousands of photos in remote locations around the world, and have built a global community of photographers connected through various social media platforms.

“Everything’s about the tubes. They’re easy, accessible, and tactile.”

It took a few months of constant tinkering to perfect the process, but Eric’s got it down. He dresses in all black, like a ninja, and holds a camera remote in one hand and a light tube in the other. While Kim strikes and holds a pose he triggers a 1-second shutter release and moves the light to create shapes behind her. In a long exposure, anything in black will disappear if it is moving. The remaining elements in the photograph remain … Kim, the landscape, and the light. The images are transfixing. 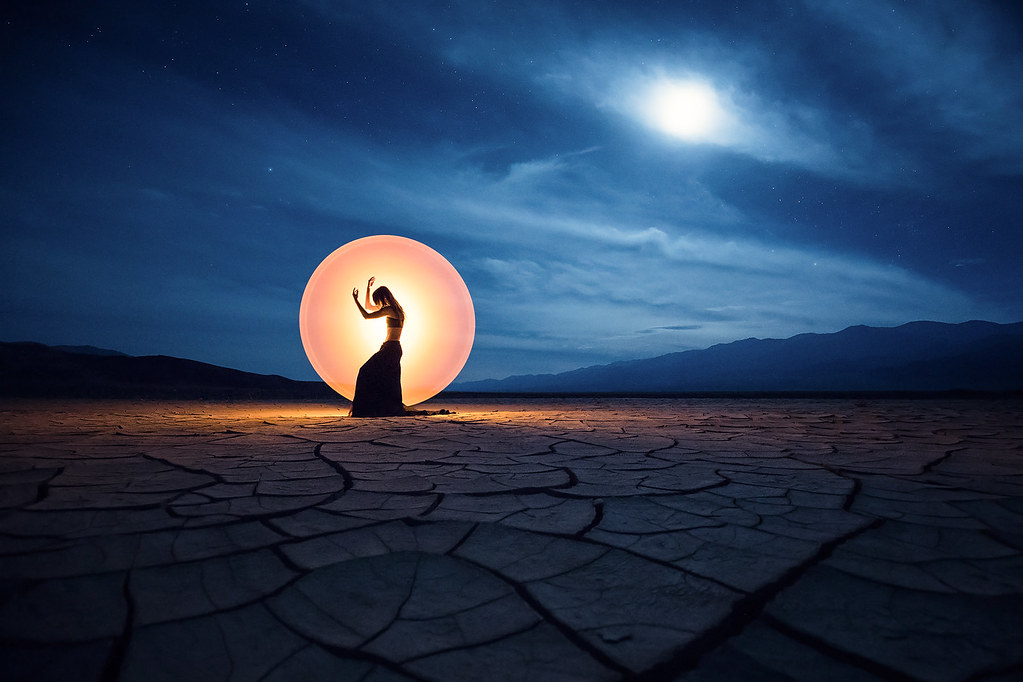 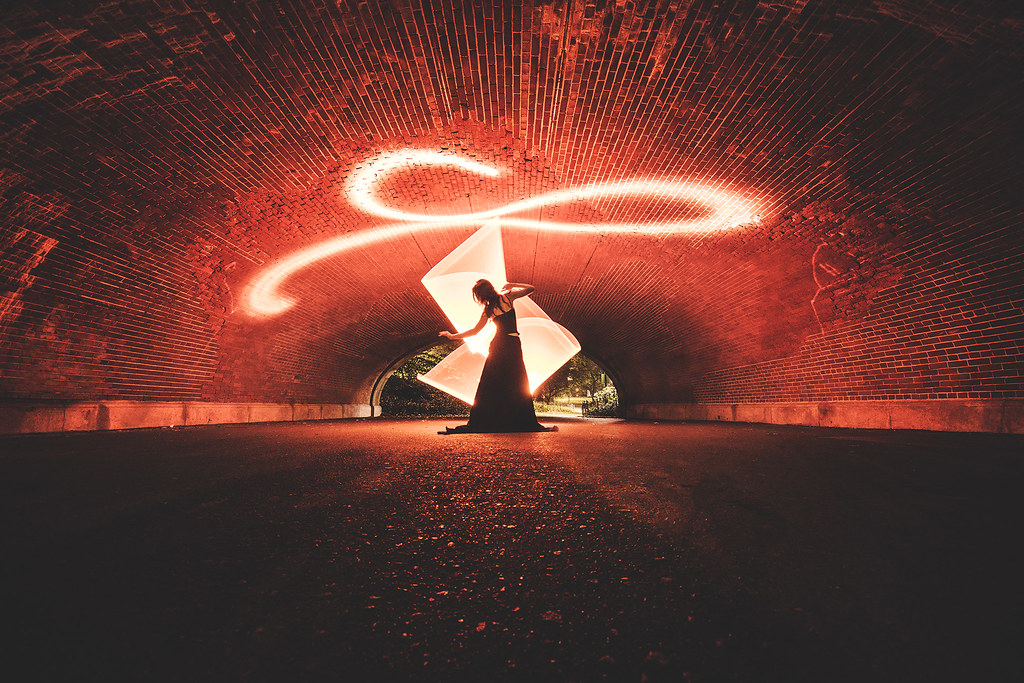 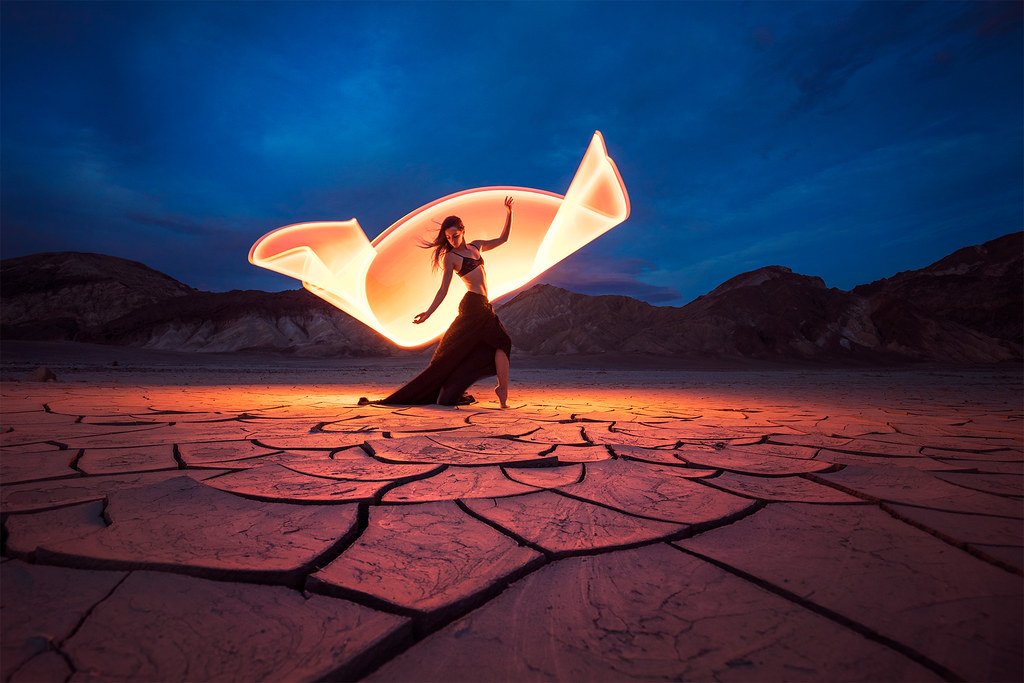 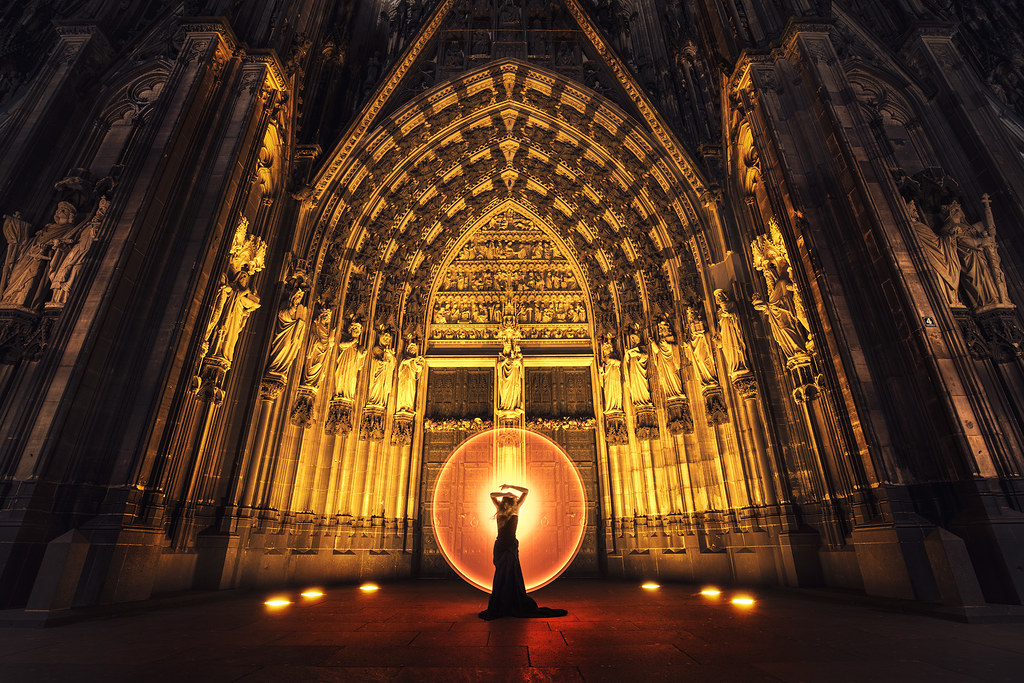 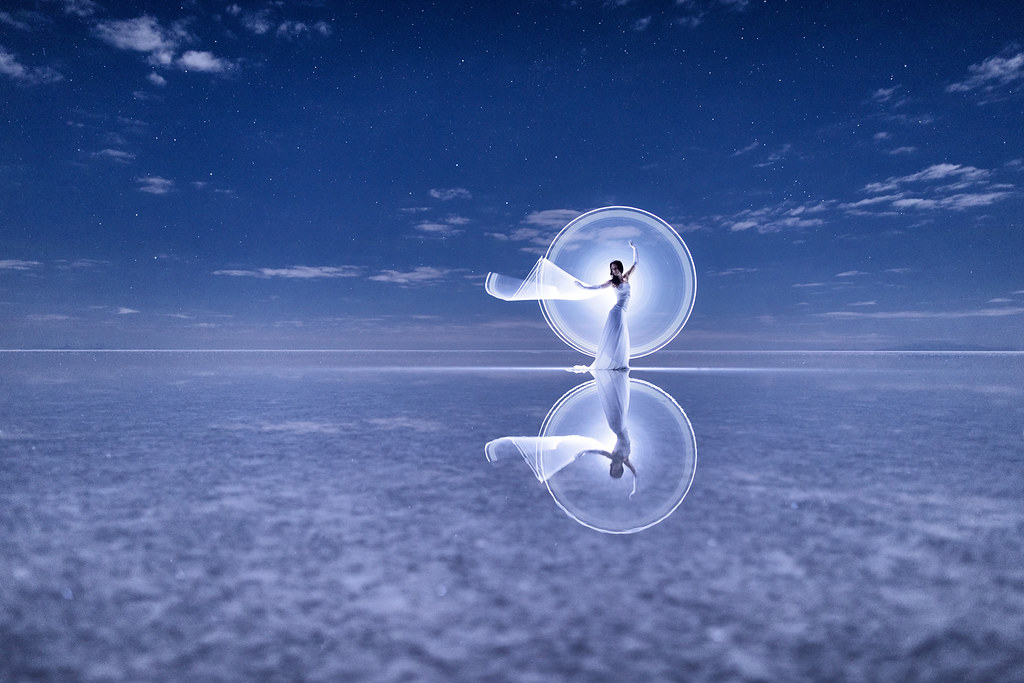 For Eric, the best part about using light tubes is that they’re so accessible for all levels of photographers. The plastic tubes he uses were purchased at Home Depot and use a handheld flash light to turn it into a wand, almost like a light saber. 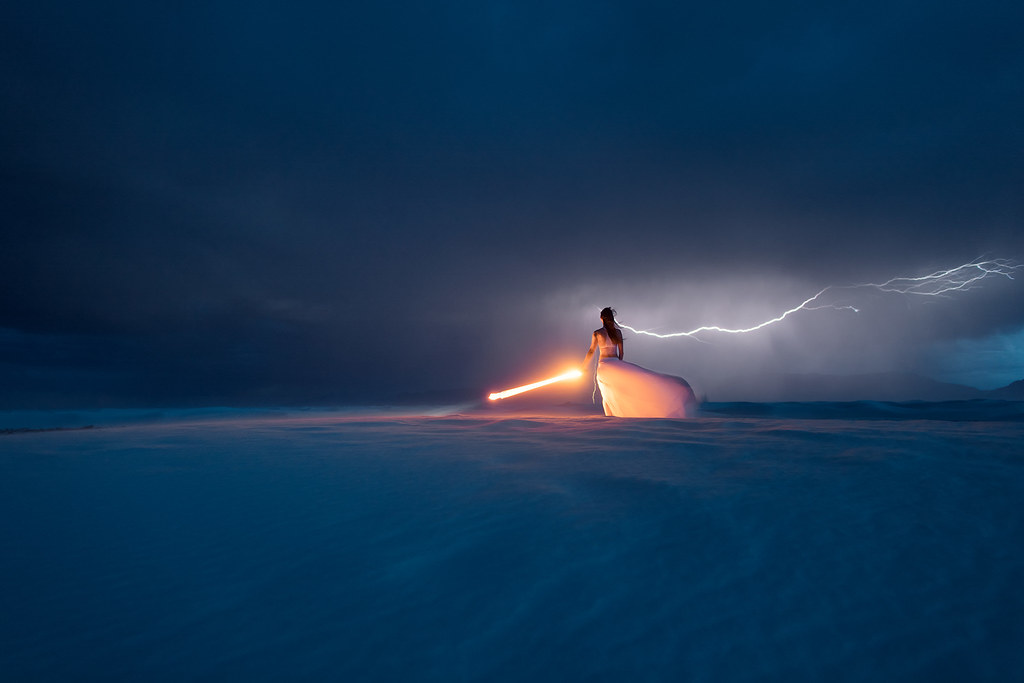 He has written blog posts on many different sites and has tube DIY videos on his Youtube page that teach how to create tubes for different types of photos. In teaching, he has also learned more. The Eric Paré Learn Group on Facebook has over 13,000 active members actively practicing and building upon the initial tube tutorials Eric created.

Adding sparklers, strobe lights, foil or color variations to the tubes are all suggestions or practices from the group that have allowed these light wands to grow in both popularity and refinement. Here are a few of the results: 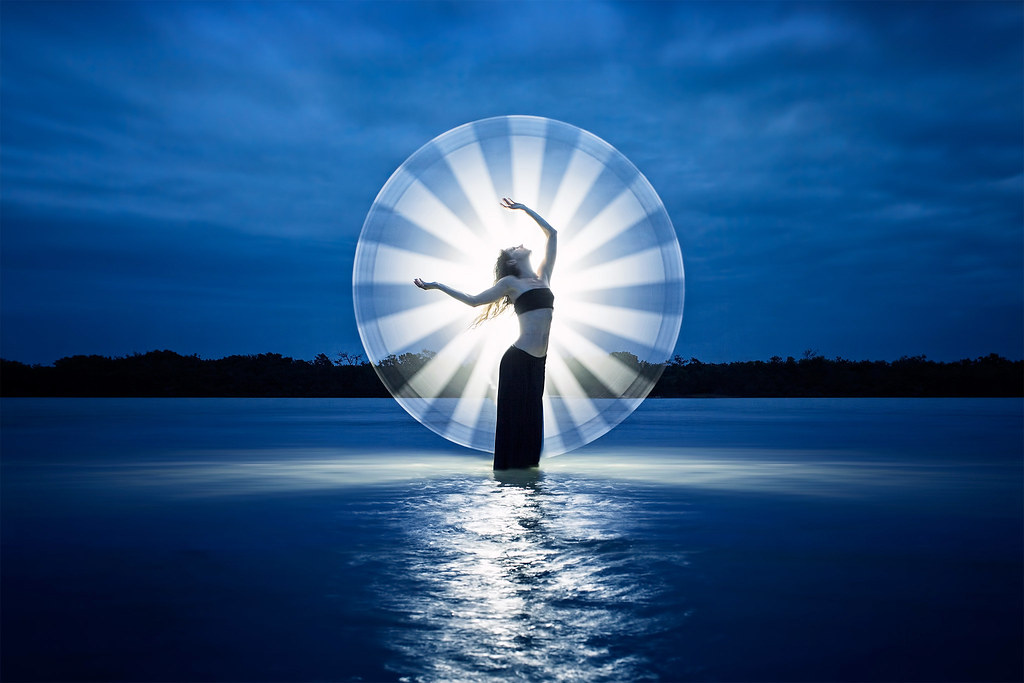 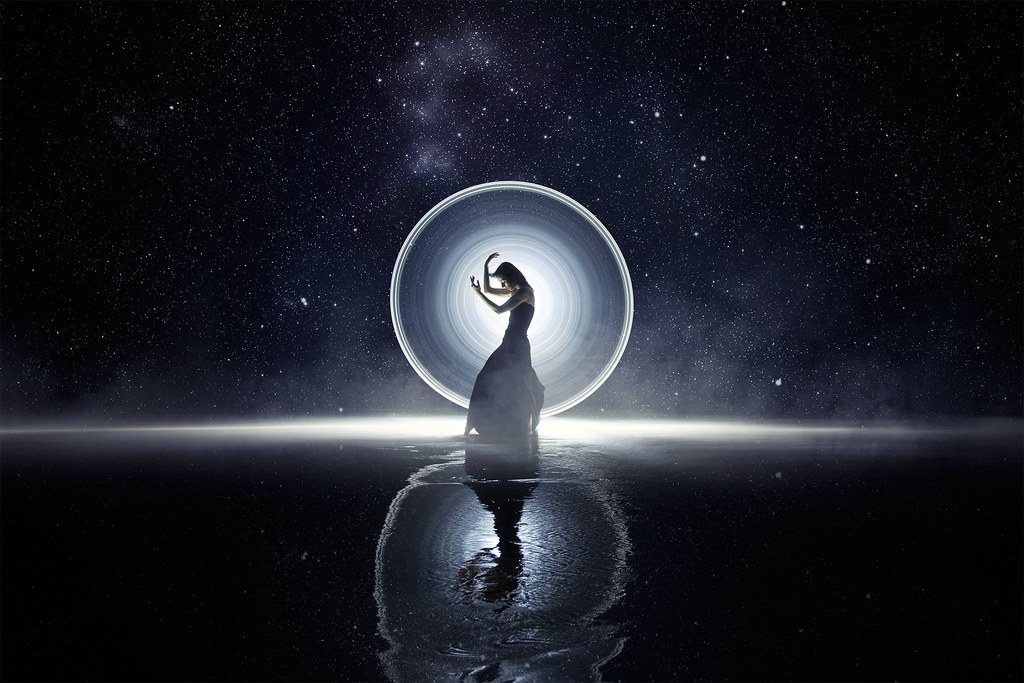 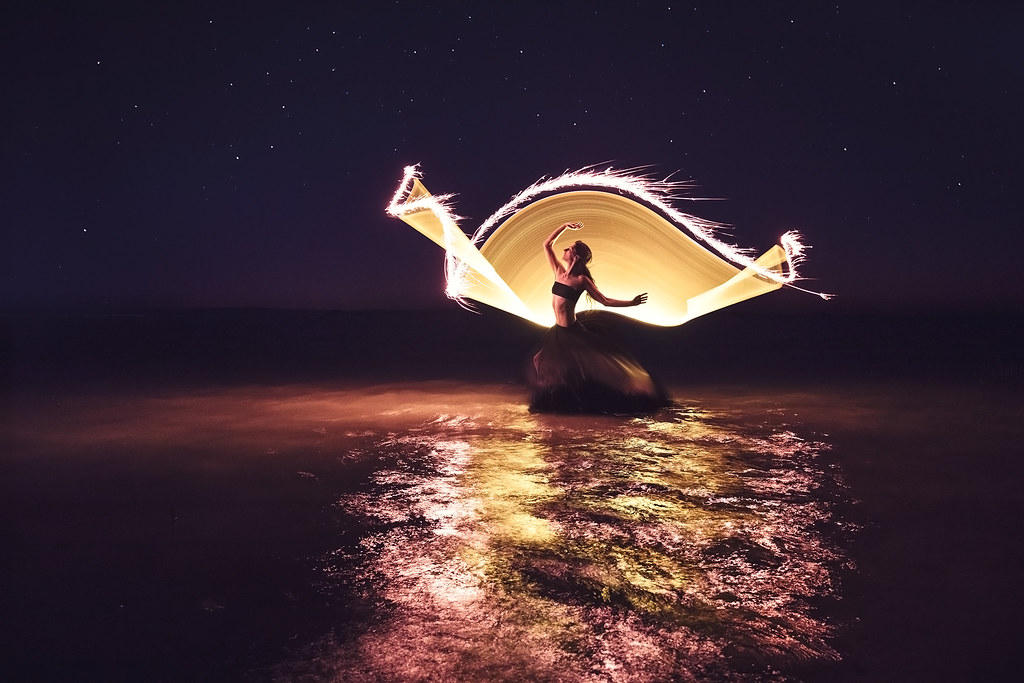 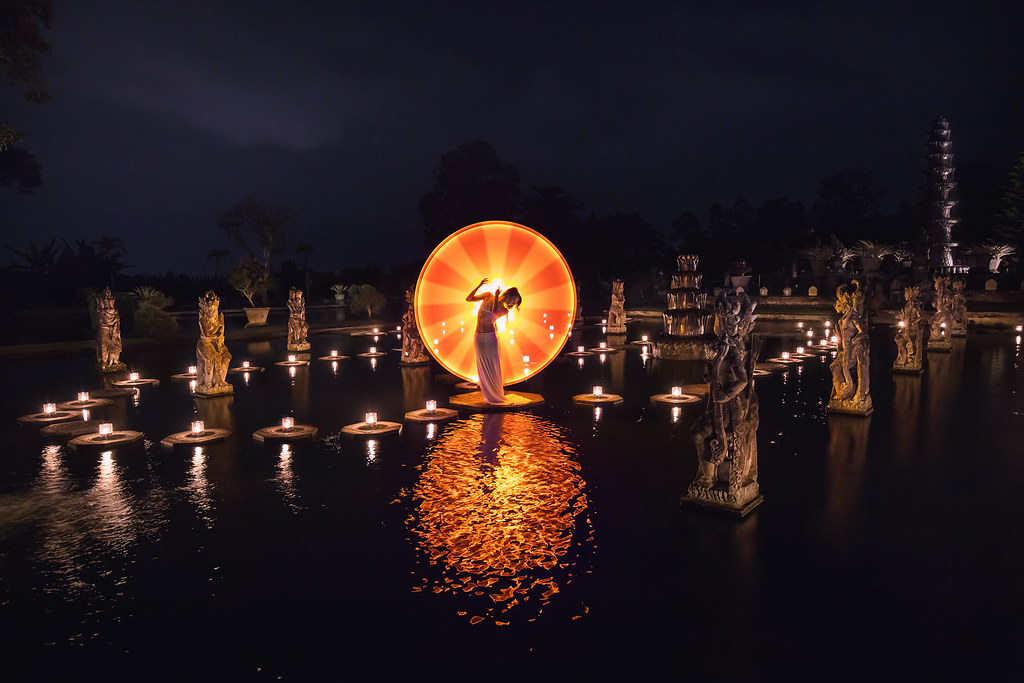 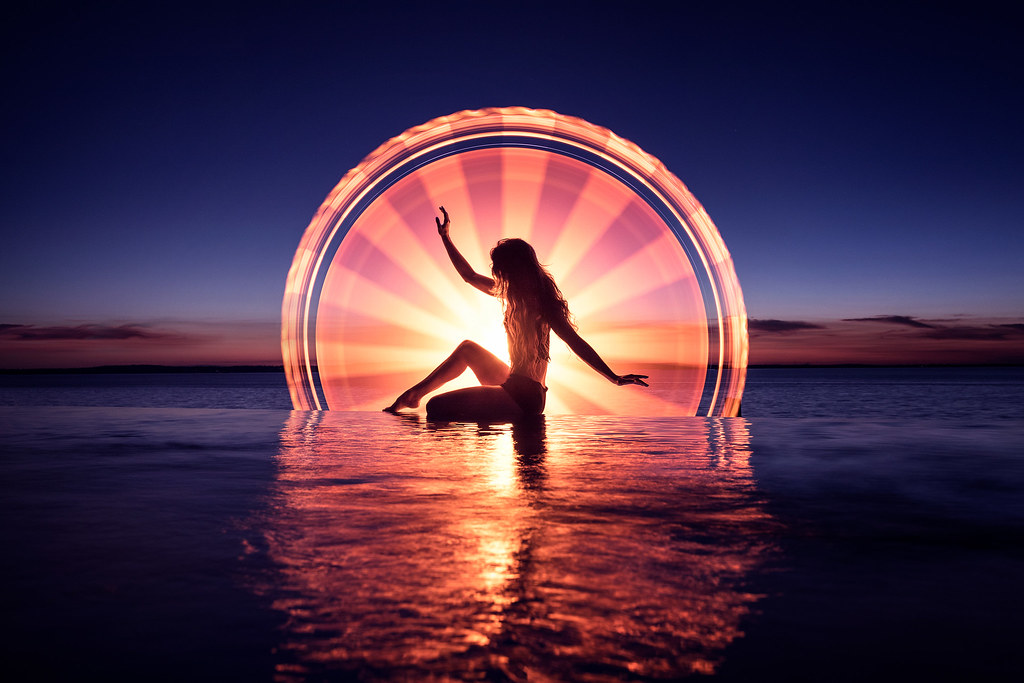 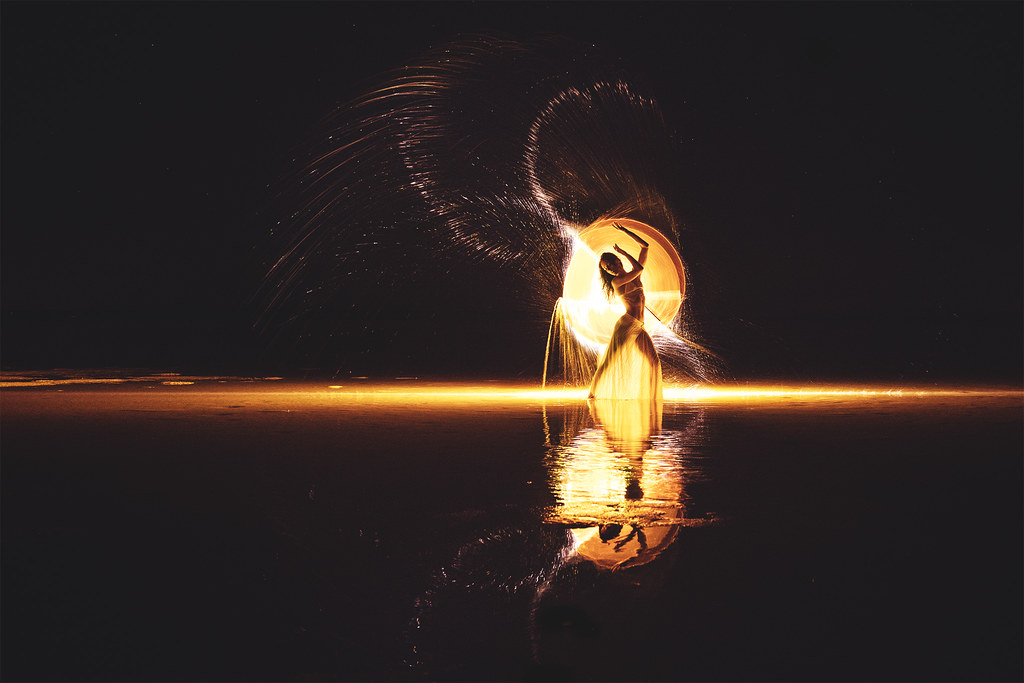 “Right now I’m having fun with simple techniques applied to bigger technologies,” Eric said. After a 2-year-anniversary show with HP this weekend in NYC, Eric and Kim will be road tripping across the US in search of some gorgeous, vast landscapes to photograph in.

July 20th is Moon Day, an occasion to remember and celebrate the day man first landed on the moon. On this day in 1969, American […]