You may have heard on the grapevine that we were due to release a brand new feature on Flickr. We’re calling it “Places”, and I’m here to tell you what it’s all about.

Often on FlickrBlog, you’ll see posts about photos that catch our eye. You may have noticed that it’s never a developer that posts things like that, because we all have to spend a lot of our time elbow deep in code and just don’t get enough time to take in everything Flickr has to offer.

We needed a cunning plan – one where we get to work on a project and get to see wonderful photos taken all over the globe. So, with our mantra of Flickr being “the eyes of the world” and the dedication of our geotagging members, the Places project was born.

The plan, however, worked too well… 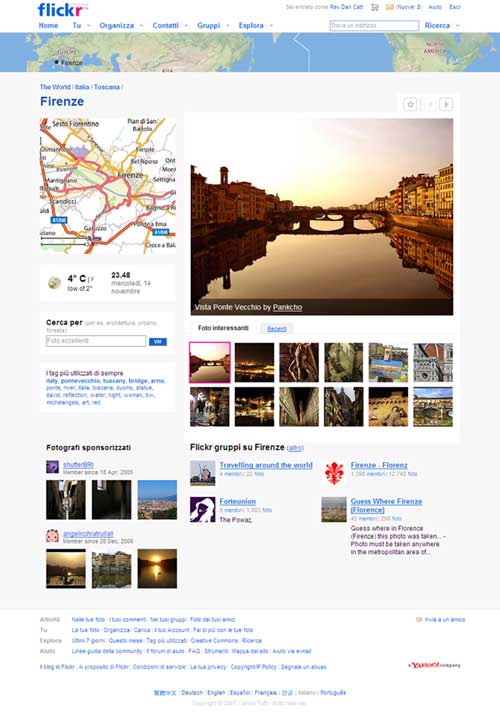 As we began to use the first prototype, we all spent an awful lot of time gazing at the amazing photos that kept appearing on our screens. Instant messages would go flying back and forwards amongst the team, saying things like “oooh, look at Shanghai“, “what about Reykjavík then?” and “check out the Calatrava in Valencia!!”

We knew we were on to something good because we couldn’t help ourselves from pausing to enjoy using this new way to see photos on Flickr. We found images we would never have come across any other way, from Flickr members literally all over the world busily capturing what they see.

In many ways the Places project is a big thank you to all the wonderful photographers who have taken the time to put their photos on the map. With nearly 50 million geotagged photos – around 35 million of which are public – it was about build something to better show them off.

As Flickr continues to grow, we’re realizing how much time it takes to figure out better ways to display so much information. We’re still learning! We’re also really excited to show you the results of our play so far. We hope you enjoy exploring as much as we have. There’s so much to see. 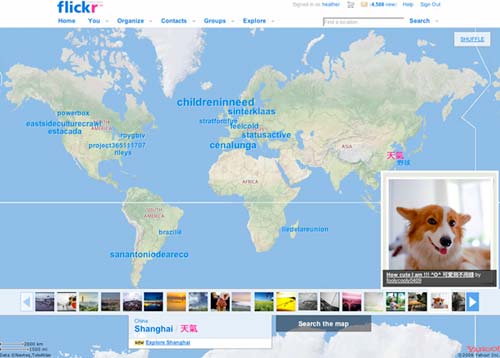 The cherry on top of this Places release is a new view on the hot stuff happening on Flickr. We’ve built an experimental new map view built upon the work of highly trained teams of globe trotting squirrels – sort of like the Magic Donkey* but more rodent-y – whose sole job on the team is to ferret out breaking news (or a nerdy conference, or a wedding, or some other thing that lots of people are photographing) and let us know so we can display it on the new map view. Quite how their squirrelly minds work is a mystery to us all.

Before you go leaping off, there’s just one more thing. Those millions of geotagged photos? Turns out that showing them ‘page by page’ on the map was a silly way to do it, so we’ve taken some time to redesign the browsing interface for the map too. Now you can actually see some of the photos themselves at the same time you’re looking at the map, thanks to our new cleverly titled ‘Photo Ribbon’. Crazy, I know.

We’re dying to hear what you think, or if you find any bugs around the place, so feel free to head for this official forum thread for the new Places project and drop us a line.

* But, what’s the Magic Donkey?

On November 30th 2007 we’ll be hosting a little Flickr gathering and we’d love you to come. It’ll take place in the early afternoon at […]