“At first glance, some people think my images are from space — you know, planets, stars and what not,” says photographer Richard Heeks. “Others have mistaken them for cells or microorganisms… something you’d see in a microscope.”

“But when they find out they’re actually bubbles,” he tells The Weekly Flickr in the accompanying video, “they’re both baffled and amazed that something so small and ordinary can be so beautiful!”

Richard’s love of capturing images of bubbles happened randomly in 2007, at a time when he was obsessed with taking photographs of eyes. 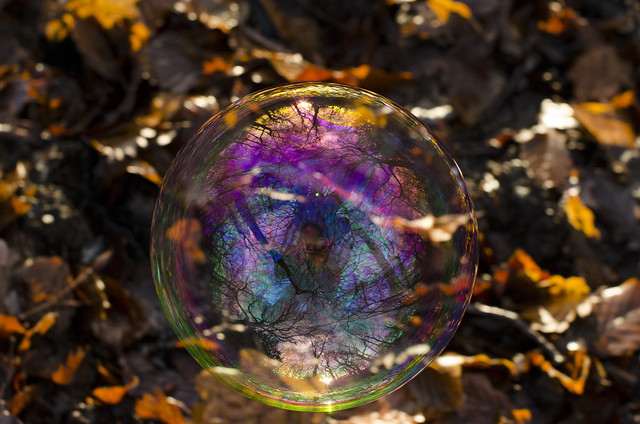 “I began noticing just how beautiful eyes were,” Richard explains. “I tried to take really close-up photographs of my wife’s eyes… I noticed that I could see my own reflection in her eye, and the landscape around us. It was stunning.”

“At the time my nieces, who were only 5 and 7 years-old, were blowing bubbles, and I noticed how they had such weird reflections,” Richard remembers. “Using my experience from photographing eyes, I tried to photograph the bubbles and their internal reflections. I got some OK shots, but later I looked up other bubble photos on Flickr, and I realized that I was doing pretty well. Within a few weeks, I was hooked!”

From that point on, Richard put together photo shoots on nice sunny days when the air was still at his home in Saltaire, England. He’d spend hours blowing bubbles, concocting different soap mixtures and photographing the results.

Richard asked his wife to help pop bubbles with her finger while he photographed them. Richard said it was very hit or miss, but after a day’s worth of shooting, he captured some really clear and beautiful shots of the bubbles mid-burst.

“From then on, I became obsessed,” Richard admits. “I began doing more and more photo shoots, trying to get something different every time. In 2010, I started playing around a bit, getting closer and closer [to the bubbles], capturing macro bubbles. Later that year, I also photographed bubbles inside bubbles. I watched a few YouTube videos and saw how easily you could just blow on a bubble, which would create a smaller bubble within it! So I tried it myself and got some beautiful results.”

In 2011, Richard bought a special mixture from a bubble shop in London that allowed him to make Zubbles — colored soap bubbles. After a couple attempts, Richard’s bubbles ended up being blue and definitely had a different look to them. Their reflections, which were a bit clearer and more shiny — became popular on his Flickr page.

Despite always coming up with new ideas to form new and beautiful photographs, Richard admits there’s no guarantee it will actually work out.

“I would say that much of what I do is serendipitous,” Richard says. “Bubbles are extremely complex, and I’m often surprised by the outcomes. Luck plays a big part. I have to wait and rely on the weather. The light can do weird and beautiful things, such as influencing the colors and creating beautiful flares – but it can also be distracting. I can seek out beautiful places to take the photos. I can also choose particular camera settings or which bubble mixture I take along, but I can only capture what the bubble gives me at a particular moment in time.”

The reactions Richard has received has been overwhelming positive.

“Bubbles are familiar and simple, in that lots of people played with bubbles when they were children,” Richard says. “So everyone appreciates them. I often get requests from scientist, who are interested in the bubbles’ spheres and natural forms. They’ve used my photographs in journals, magazines and presentations. I’ve also been approached by bubble performers — people who are experts in working with bubbles in shows, etc. We’ve collaborated together on what mixtures work well, etc. It’s great to share ideas with these people.”

Richard has been blowing bubbles for over five years and confesses he never gets bored of them. He has no plans to stop and knows there are different kinds of bubbles (forms, shapes, colors) to capture.

“Blowing the bubbles is a nice tactile experience,” Richard says. “Watching bubbles fly around in the wind is beautiful. It’s just a very pleasant thing to do and to watch. And if I can photograph the things that I can see and experience, then that’s pretty cool. I love to get caught up in the experience of running around after bubbles, and just enjoying the experience of being in the moment.”

For this week’s #FlickrFriday theme, #DorothysRedShoes, we’d like you to dive into the world of The Wizard of Oz and discover Dorothy Gale’s red shoes. […]