“How often do you see people engaging in bull racing — men literally in the mud at the mercy of running bulls?” he asks The Weekly Flickr in the accompanying video. “The mere thought may sound crazy but it’s just one of the things I’m so happy to have been able to capture and share on Flickr.”

Anoop came across this event randomly a few years ago while traveling throughout Southern India. 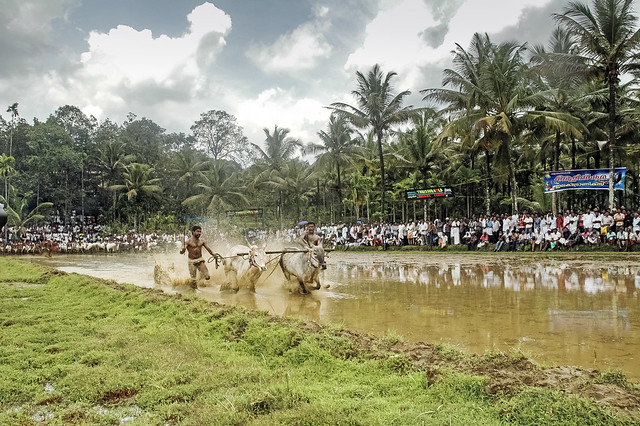 “Bull racing is a rural sport in Kerala,” Anoop says. “It’s held every year in the post-harvest season — roughly within the months of August and September. It coincides during the period of Onam, which is a religious festival in Kerala. People from in and around the area gather for the event; it’s probably the most exciting thing that happens during this period.”

“This is not an organized sport by any means,” Anoop says. “All the jockeys are farmers, who specialize in bull racing on the side. The bulls are specially bred and trained for such races and are prized possessions of the farmers.”

Instead of a track, the event (called Maramady) takes place in flooded rice fields — about six to twelve inches deep — which makes it extremely entertaining for the crowds watching from the sidelines.

“Oh there is mud everywhere!” Anoop explains. ”I myself was taking photographs initially from a different angle, and I was thigh deep in it, and it took me about ten minutes to extricate myself from the mud.

The rules are simple: A pair of bulls are sent charging down the football-sized rice paddy soaked field, while the jockeys hang onto wooden planks or harnesses and slide through the mud. Often times, as seen in Anoops photos, it’s hard to even spot the jockey because he’s doused by all the wet mud — almost as if he’s surfing and consumed by the waves. Alongside the bulls are two men guiding them in the right direction. Like the professional jockeys, these runners are also well trained and are experts in managing the bulls. Nearly 30 teams participate in the race, which starts at noon and continues up to dusk. The team with the fastest time wins.

“The sport is fairly dangerous,” Anoop says, “because it is almost impossible to control two bulls who are racing down. They’ve been bred for racing. So the moment they start, you can’t really control them.”

“What makes photographing bull races exhilarating is it’s an experience in itself,”
Anoop says. “The fact that there’s a huge crowd [of people] who are cheering and shouting, and there’s no place to shoot [photos] from. If you are lucky, you are in the front shooting photos. Sometimes you’re shooting through the legs of the crowd, and you don’t know when the bulls will come crashing straight or onto you; you have to dive.”

Anoop is motivated the most by his quest to capture traditional/cultural Indian activities before they’re forgotten.

“I love to take pictures of festivals and fairs that are going on in the country, which may slowly go away,” Anoop explains.”Take the example of the bull races. There have been problems — people have been saying that it should be shut down or it isn’t economical. So, in time, bull races may just go away.”

“I wasn’t even aware, until the time I started doing photography, that these events were slowly going away or a whole tribal culture was disappearing. After having photographed them, it set me thinking about why people are not aware of such activities. And it was only then I realized that in this fast pace of change India is undergoing — whole sets of culture, way of life, people — they were vanishing forever from centuries of our Indian roots to a daily urban grind of existence.“

At the end of the day, Anoop says he hopes the reactions he receives from viewers is sheer amazement.

“[I’d like them to feel] amazement at the fact that there are still sights that people have not been able to see or feel,” Anoop says. “Perhaps that kind of a photograph ignites wanderlust, which I think is at [the] core of human growth and existence. If it can [encourage]… travel, come and see the country, I think my job is done.”

Visit Anoop’s photostream to see more of his photography.