“Some of my favorites are Maury Edelstein, Michael Jang, Ted Pushinsky, John Harding, Janet Delaney, and Fred Lyon,” said Troy. “I’ve met them through direct book sales, exhibit openings, and even a few on the street. There’s so much that can be learned from San Francisco’s photographic history.”

For the past three years, Troy has been documenting the dramatic physical and cultural shift that has gripped San Francisco. “I’ve spent most of my free time photographing a five block stretch of Market Street (4th to 9th). The photos are a mix of candid snapshots, portraits, and scenes of the changing storefronts and skyline. Things are changing so quickly that a photo taken just last month already contains images of people and buildings that are no longer around.”

Given how remarkable his photos are, many people are surprised to learn he doesn’t shoot on an expensive DSLR or rangefinder, but on $100 Olympus cameras. “I carry two small compact cameras with me, one loaded with 35mm black and white film and the other with color. Black and white is the default, but there are some shots that just work better in color,” he said. “The cameras are very simple, with no exposure or aperture settings. The only control I have is where to point the camera and when to release the shutter.”

In addition to hand developing his film and printing his own images, Troy has produced several photography galleries inside and out (if you’re in San Francisco, check out the walls of images in the Adolph Gasser parking lot), and he has made zines to promote his and others’ work.

We’re thrilled Troy is participating in Flickr Faves and we hope you like his selection of images. 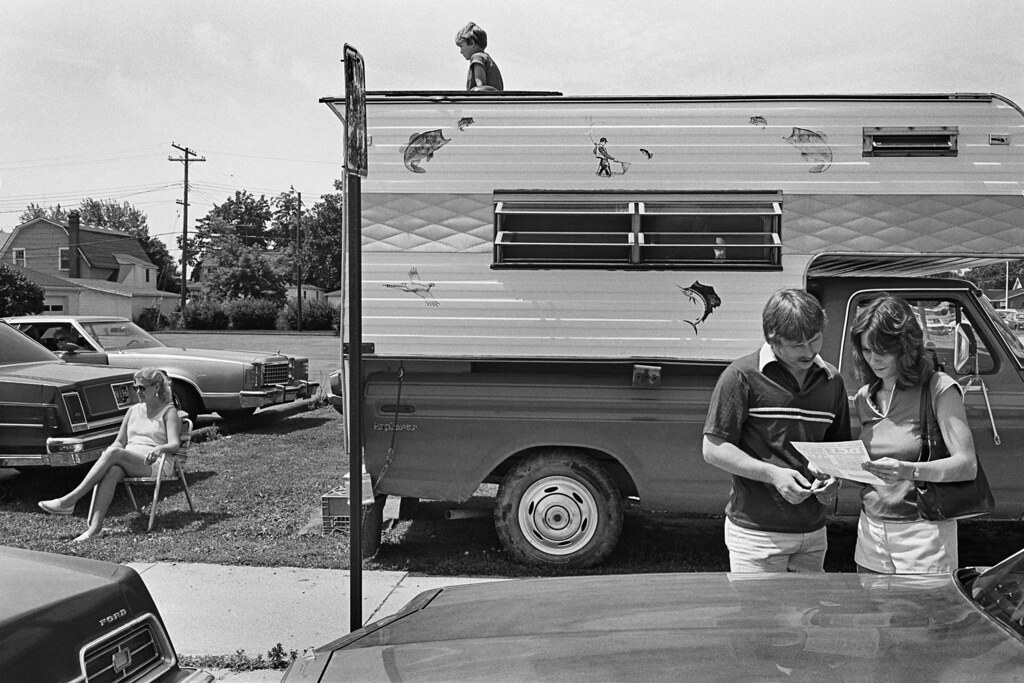 A few years ago Don Hudson started posting his 1970-80’s 35mm film archive to Flickr. Most of the photographs were made in small towns in Michigan, focusing on public gatherings like varsity football games, drive-in movies, and holiday parades.

I grew up in Michigan in the 1980’s, not far from where this photograph was taken. Looking at the image brings back many summer memories from my childhood. Moving past the emotion it stirs up, the photograph is a delicate blend of content and form. Pulling off a casual snapshot like this is much, much more difficult than it appears. 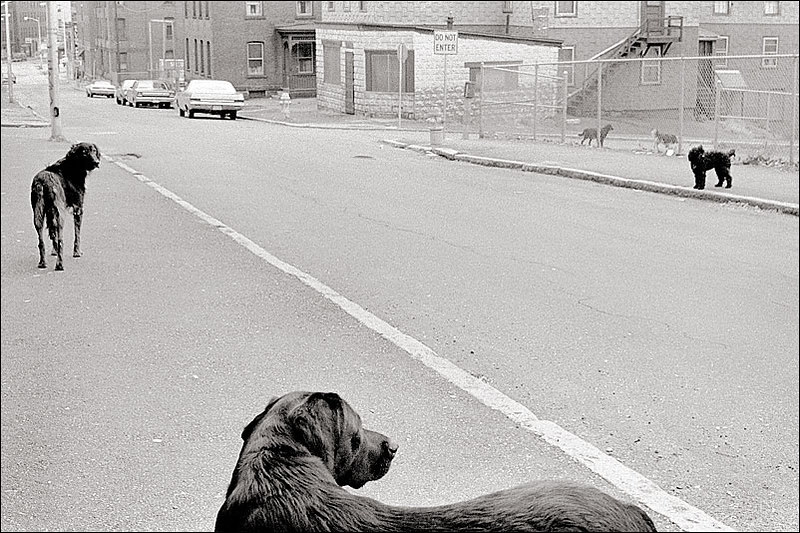 One of the first photographers I started following on Flickr was Robert Johnson. His stream is a mix of 1970’s Tri-X film scans and wide angle digital color, mostly from his hometown in Massachusetts.

Being a photographer and dog owner, I’ve always had a soft spot for photographs of dogs. In this picture you see several dogs roaming freely in an empty street. The strangeness of the moment along with compositional choice of placing a dog at the bottom of the frame pulls the shot together for me. 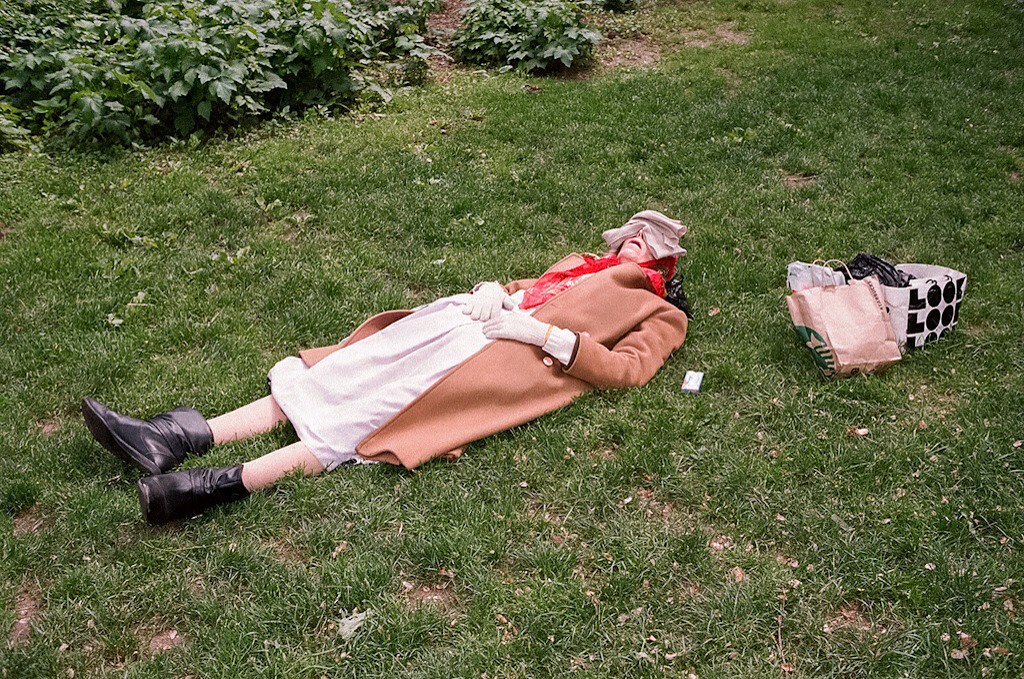 Many of the street photographs I see in color rely heavily on saturating the color itself or the color appearing in 2-3 places in the frame. Todd Gross is a photographer from NYC whose subtle use of color compliments the odd moments he finds while walking the streets.

In this photograph, there’s a surreal feeling of loneliness with a lanky older woman lying in the bare grass, face covered and taking a nap. After noticing the ironic text on her bag, the frame lightens up and carries with it a sense of humor. 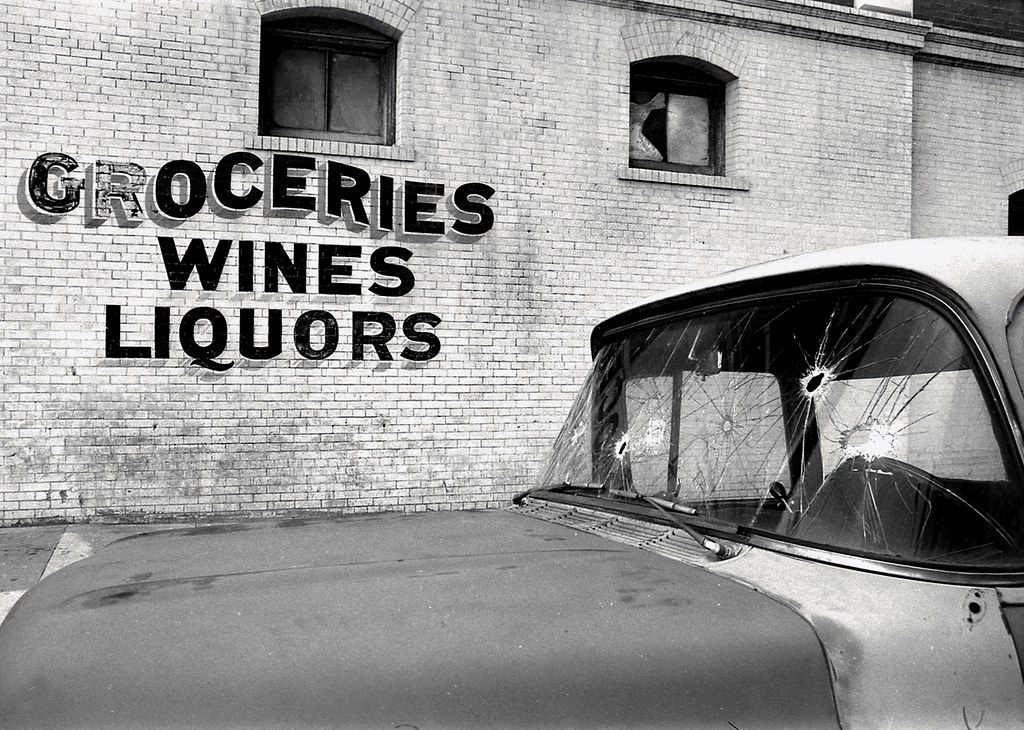 Dave Glass is an old school local photographer (and also a friend of mine). We’ve photographed many of the same neighborhoods in San Francisco, albeit 20-30 years apart. Looking through Dave’s Flickr stream you see a well documented survey of a city that has been torn down and built over.

The architecture, old cars, and signage in his pictures carry a heavy sense of nostalgia, especially if you live in San Francisco. In this photo all three elements are present within the frame, along with several bullet holes. This image is one that asks the viewer more questions than it does provide answers. 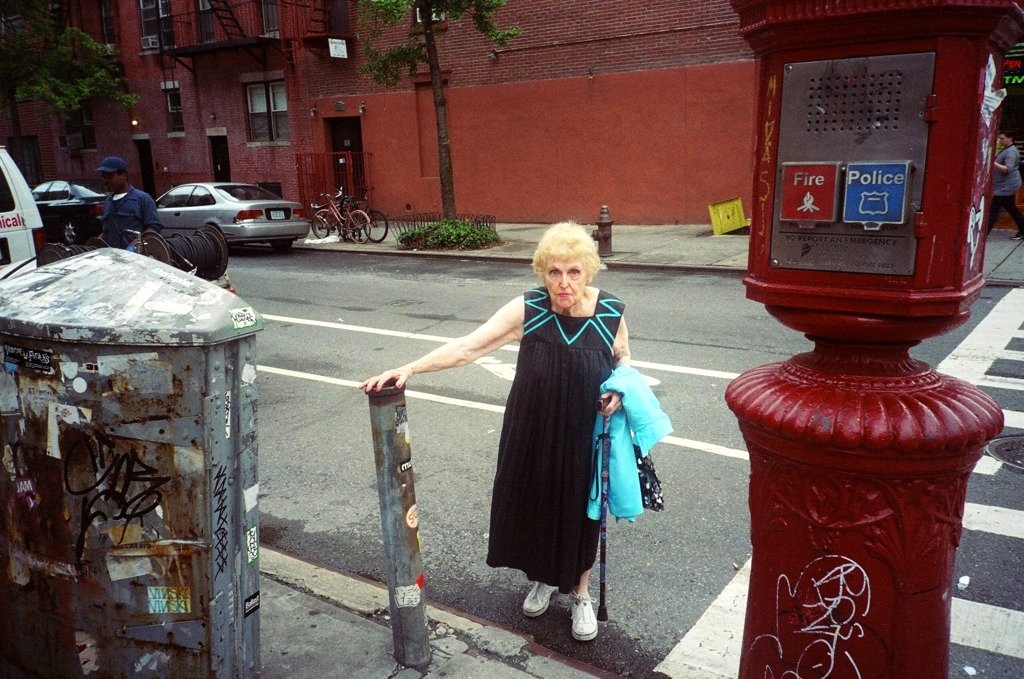 While composing a candid photo, I generally look for an interesting person, position myself, frame them in the viewfinder, and wait for the right moment or gesture before releasing the shutter. With all of this happening so quickly, the composition can get messy.

In this photograph by Justin Vogel, the woman’s posture and facial expression pull me towards the center of the frame. I don’t immediately notice the fire alarm or electrical boxes in the foreground, the man working in the background, or the hydrant by her head. Amongst all of that visual chaos, her suspicious glare and the turquoise color pops ensure this photo will only get better over time. A great candid of a great character. 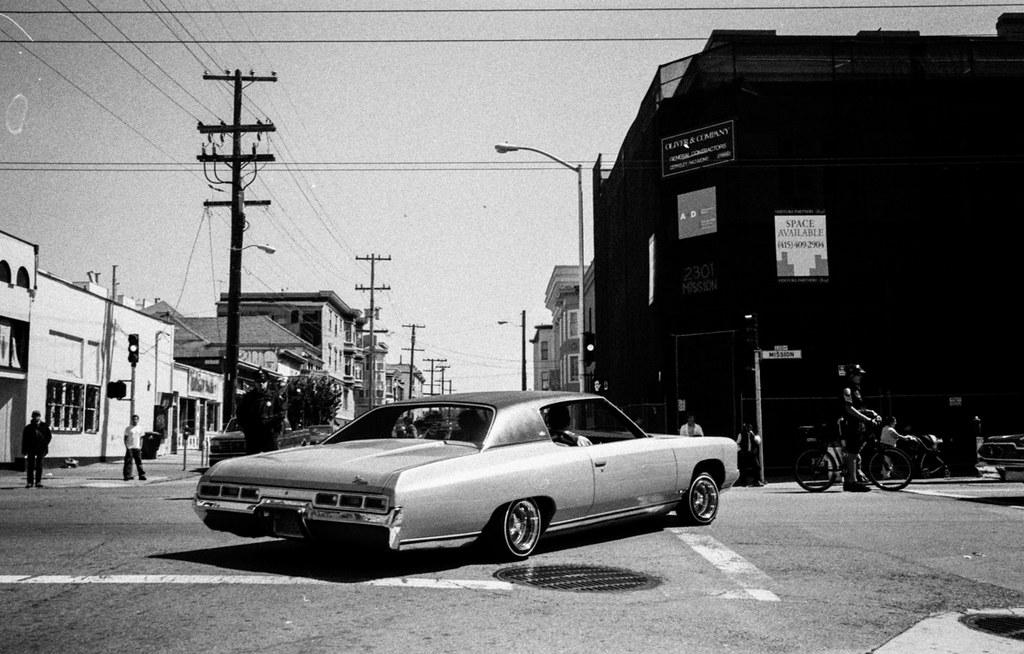 Alan Dejecacion is one of the most versatile photographers I follow on Flickr. He photographs using several different camera models and film formats, combining classic portraiture of friends and family with candid street photography.

This photo is a great example of Alan’s gentle touch on the photos he makes. It accurately captures the Mission District in transition: Old and new architecture on the sides divided by 19th street and with a lowrider car moving towards the center. 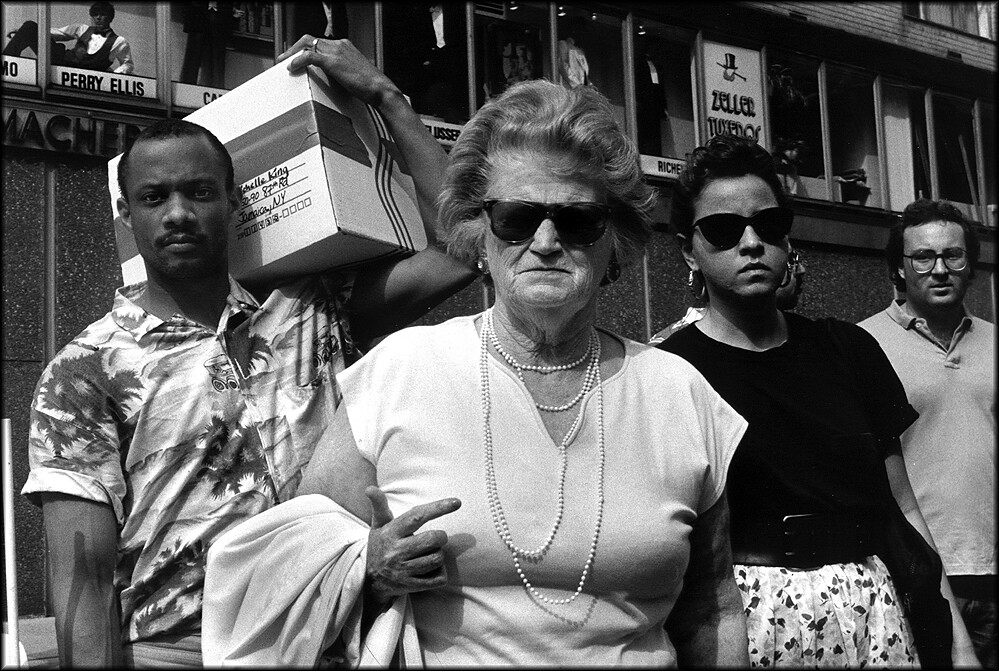 I found Matt Weber through Hamburger Eyes and soon after started following him on Flickr. Matt’s stream has many photos from pre-1990’s New York City with a focus on candid snapshots taken in the street, subway riders, and fading architecture.

I’d long thought this photo was made by the photographer walking straight into a crowd of people waiting for the traffic signal to change. Recently I learned the photo was made while Matt was driving a taxicab, shot from the driver’s side window. After discovering this fact, I like the picture even more!

The theme for last week’s #FlickrFriday was: #Dilemma. We got a lot of great submissions! Thank you all for the great photos, and here are […]

Jason Travis is the artist behind “Persona,” a long-running photo series that features a portrait of an individual alongside a tabletop view of the contents of that person’s bag, neatly organized. Watch The Weekly Flickr to learn more about this fascinating project.