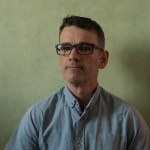 Matthew Hampshire focuses on a very interesting niche of photography popularly titled "urban exploration," but Matt prefers the more accurate term "abandoned architecture photography." Living in Stamford, Lincolnshire, Matt enjoys exploring forgotten treasures the Earth is trying to recycle, whether that be a lonesome car lot, deserted home, plane wreck, a chapel that has forgotten to be cherished, or a barren seaside. Ironically enough, the hardest part is not getting caught.

Matthew also enjoys shooting at old industrial sites. The longer it’s been abandoned, the better. He has always been captivated by the idea of a world without people, and shooting at these abandoned locations truly brings that thought to life. “What the elements and time can do to a building is extraordinary! The textures and colors of peeling paint and rusting objects can be quite stunning, and when plants and nature start to reclaim a building, it’s amazing to see how they transform a seemingly solid structure given enough time.” 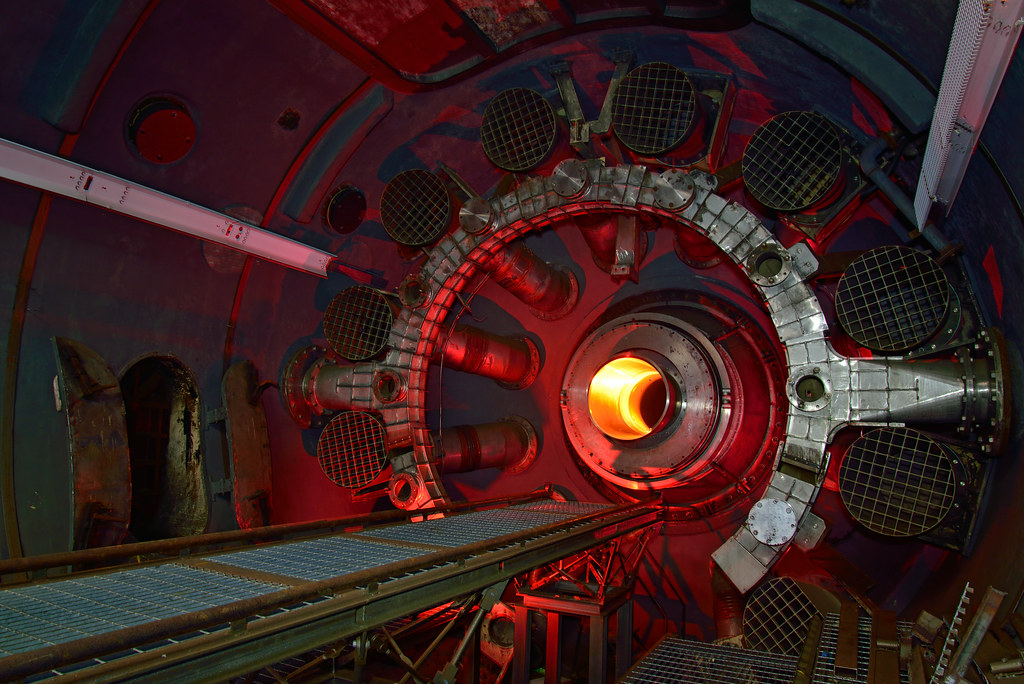 The photo above, titled “Start your engines,” is Matthew’s all-time favorite. Shot at the Pyestock National Gas Turbine Establishment, the size of the location left him on a high for weeks. Something else that gets his adrenaline going is trying to photograph these places without getting into police custody. Shooting at abandoned locations is always dangerous, as he has been “chased by dogs, fallen through floors, been shot at, climbed down rock faces in a pitch black cave and spent hours hiding in a multitude of places from security.”

He elaborates on one particular experience:

“At one industrial site in Italy, we spent about an hour getting into the site by climbing a large wall with the aid of some trees, then edged our way down the side of a river, climbed another wall, got into the building only to set an alarm off after being in there for about 5 minutes! We then had to do everything in reverse with a lot more haste with alarms ringing and sirens wailing. When we got out, the police were looking for us through the woods, so we had to trek about a mile through the trees and try and find another way back to our car without being seen.”

Matt is self-taught and only got a camera because it came for free with his first PC. Little did he know it would turn into such a passion. After watching a ton of youtube tutorials, reading many photographer features and swapping tips and tricks with other photographers, his skills rapidly improved. Soon enough, he was spending hours driving to these places, sometimes over 1,300 miles in a three-day weekend plus a ferry or Eurotunnel crossing. The locations are a prime element in his work, so they’re worth the search.

Staircases have always been central in his photography due to their naturally photogenic form. “From the simplest stairs to the grandest of staircases, they all seem to have a real beauty. I think because they are the focal point of so many buildings, the architects always seem to try and make the most of them, making them great to photograph.” 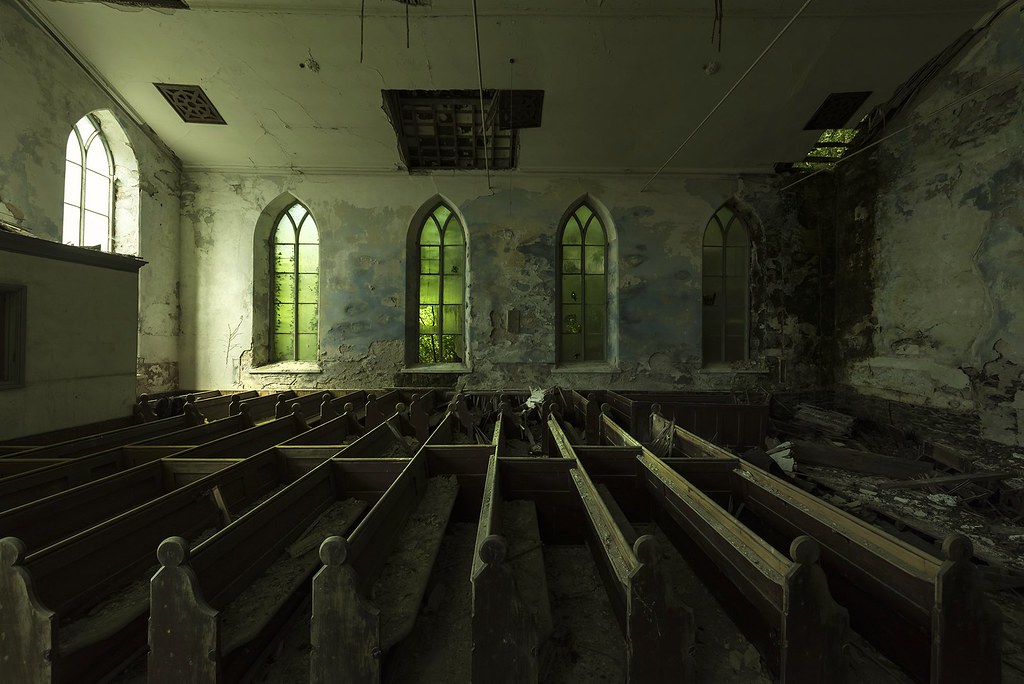 This deteriorated Welsh chapel is the merging of 3 different shots, manually stitched together in Photoshop. Matt elaborates on the technical process in explaining: “I took the highlights from the darkest exposure for the windows. Then used the mid tones and shadows from the other lighter exposures. When I first started with this type of photography, I did a lot of HDR with various programs, but much prefer to get a more natural looking image by doing things manually now.”

If Matt could change a few things, he would have shot much less with his fisheye lens. When he first acquired it, he was just starting to explore abandoned buildings and looking back he wishes he would have had more “straight shots.” 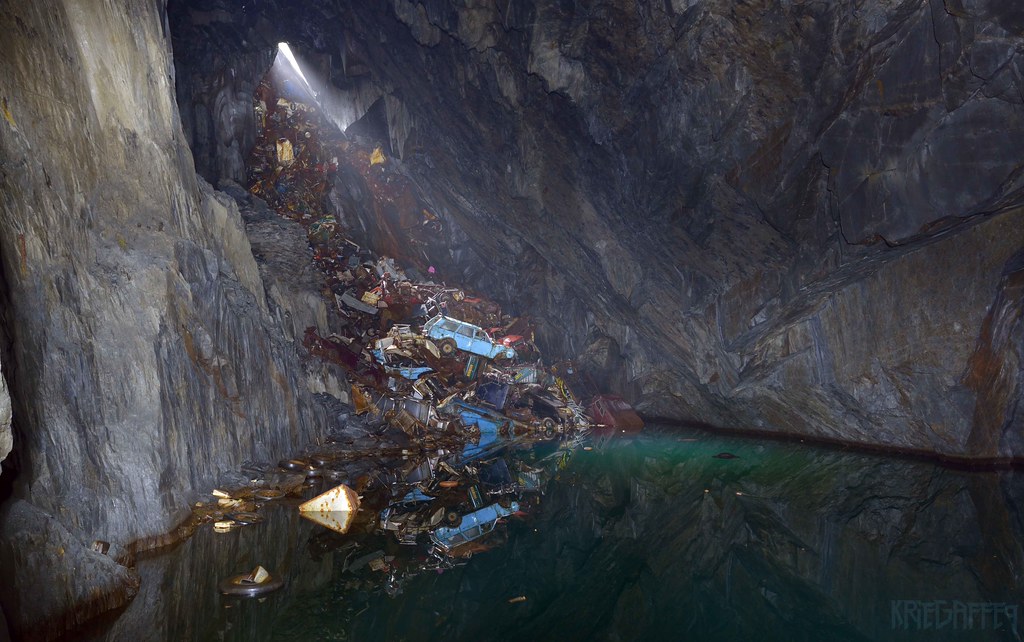 The photo above is of an old slate mine that is no longer in use. “The local council got rid of cars that had been involved in accidents by dumping them there, and it slowly got filled up over the years, and was then forgotten about until a good friend discovered it many years later.” Although it remains in the UK, Matt would discourage people from visiting, as it’s a dangerous place. Arriving at the place where Matt got this shot involves traveling through a “partially collapsed tunnel half full of water and a long climb down a rock face in the pitch black.” 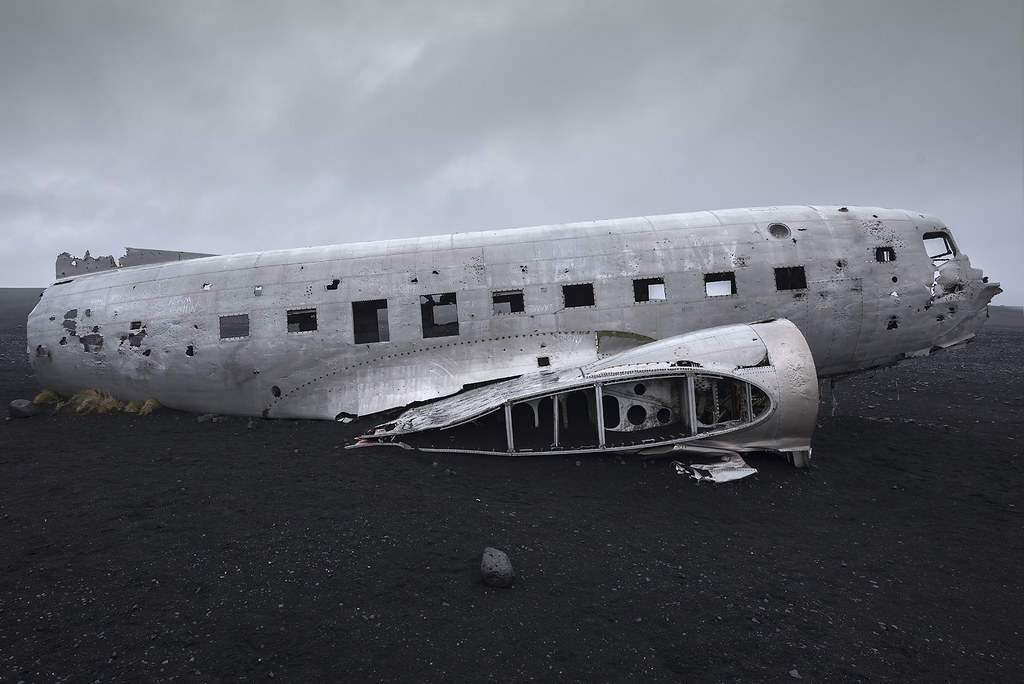 Matthew’s work is on display at a local gallery in the UK, so if you’re in the area be sure to check it out! Come fall, Castle Galleries will begin to sell a limited series of his photographs, but as for right now, you can purchase his work on his website or see it for free on his Flickr Photostream.

Another Monday, another fun day! The Flickr Heroes of the week are ‘San Manuel’ by john vermette on Tumblr and Twitter & ‘Whale Shark’ by […]