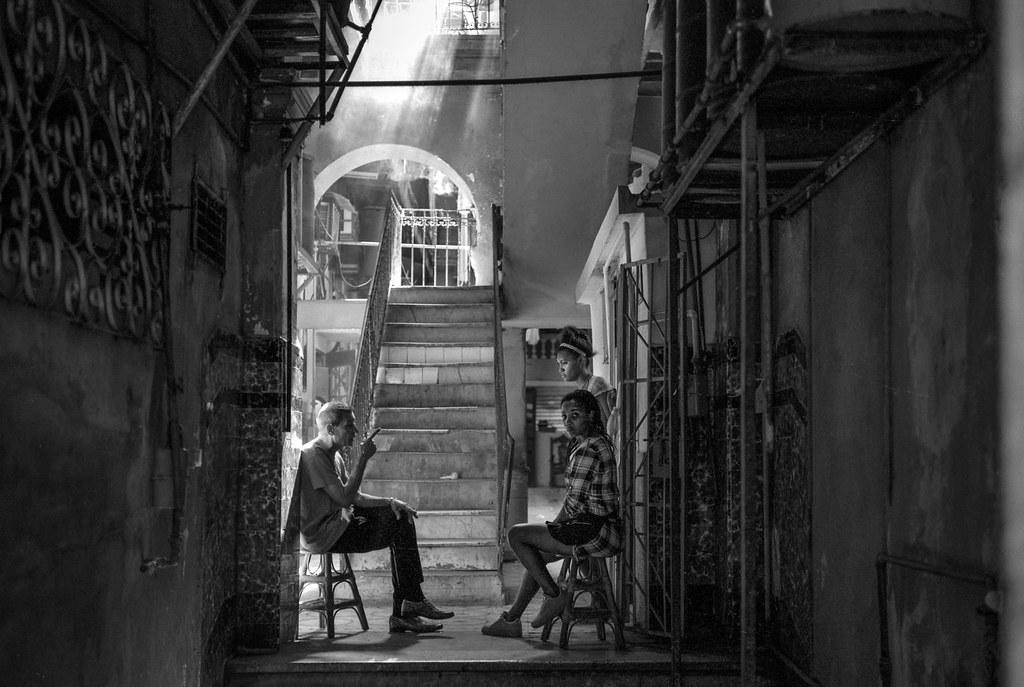 2. In one sentence, please describe what you captured in this shot.
An older gentleman was having a conversation with two young women in the hallway of a building in Havana.

3. Why did you select this photo to share?
I selected this photograph because it is one of the images I’ve captured over the years that I’m most fond of. I also selected it because it was the first time I was able to spot something and set my camera’s settings by eye rather than using a light meter.

4. What style of photography would you describe this as and do you typically take photographs in this style?
I’m not really sure what style I would describe it as. I guess documentary. I normally do photography to document my life and the environment I’m in at the time, so my photographs seem to take on this style.

5. When and where was this photo taken?
This photo was taken in Havana, Cuba, about three or four years ago in [the month of] December.

6. Was anyone with you when you took this photo?
I was traveling with a good friend and fellow photographer.

7. What equipment (hardware and software) did you use?
The camera used was a Fuji GW690III with a roll of Ilford Delta 400. I developed the image at home in Kodak XTOL developer. I scanned the negative on an Epson V550 using Epson scan software.

8. What drew you to take this photo?
I walked away from my friend who was in the act of photographing something. I walked down a side street and just happened to glance in the open doorway of a large apartment building. I immediately stopped, did a quick guess of what my camera settings needed to be, set the camera to my desired aperture and shutter speed, focused, and took the photograph. I didn’t take time to compose the image the way I would have liked. The one young woman looked at me as soon as I took the photo so I knew a second photograph was out of the question.

9. How many attempts did it take to get this shot? How long did it take you to get one that you were satisfied with?
I made one attempt to take this photograph. I was satisfied after the first attempt.

10. Did you edit (or do any post-processing/production on) this photo?
The photo was edited in Epson Scan for the black and white point. I then did some dodging and burning on the three people as well as the steps in the background.

11. What encouraged you to share this photo online and with others?
I decided to share this image because it is my favorite image that I’ve taken so far. Sure, some would say it has flaws, but for me it was my first time trusting myself to decide on the aperture and shutter speed in order to capture a moment in which I knew I only had one chance. It was the moment when I finally felt like everything was coming together with my photography.

12. Did you learn anything in the process of taking, editing, or sharing this photo?
Yes. I learned that I was becoming less reliant on in camera or handheld light meters and that I didn’t need to take every photograph wide. I knew I wanted as much in focus in this image in order to capture the feel and the environment, but I also knew that given the dim light, I didn’t have much room to play with the shutter speeds before they would become too slow for a hand held shot.

13. Do you remember what you had for breakfast the day you took this photo?
For breakfast I had a croissant and coffee which had become our daily routine before heading out to shoot.

14. What would you like people to take away from this photo?
I want people to realize that in the same way you may have different experiences throughout your day such as a conversation in a hallway with a neighbor, there are billions of people around the world who are each having their own daily experiences. In a strange way, that makes me feel somewhat closer to humanity as I realize most of us are just going about our days and filling them with many different experiences which add to who we are.

15. Is there any feedback that you’d like to get on this shot?
This is one of the few images I’m not interested in getting feedback on. I guess I just want to be happy with it.

Let these tips, stories, and amazing photos of the stars from Flickr members inspire your next astrophotography shoot! 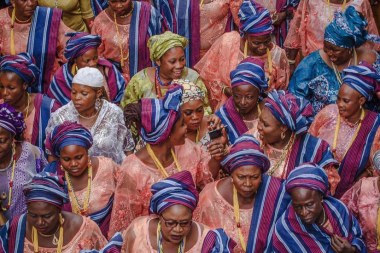 Learn about the Osun Osogbo Festival and how visual storyteller Taiwo Aina captured a moment celebrating the festival’s beauty and culture.