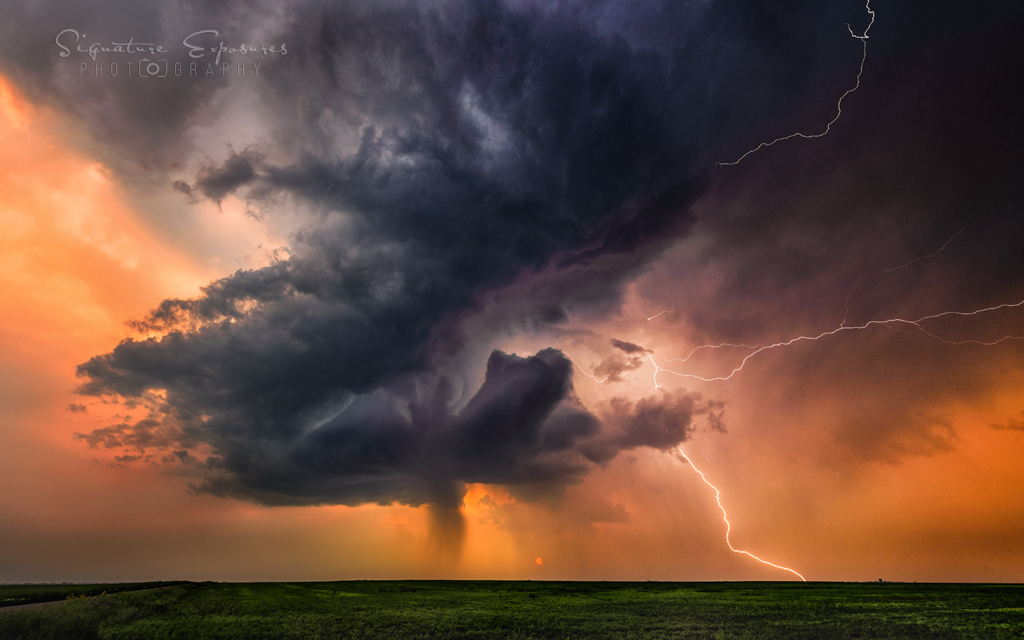 I met Shannon Bileski virtually over Zoom on a Friday just before she was about to enjoy a long weekend of aurora hunting. Shannon updated her Zoom background to the spectacular, Your Best Shot award-winning photo that she took in 2021. Fun fact: Shannon’s cat, Storm, made a cameo during the interview. We discussed how Shannon got into storm chasing, her photography goals throughout the years, and what she wants to capture next. The conversation evolved beyond our usual 16 questions, and we hope you enjoy and learn from the additional insight that Shannon shares.

Read on to learn more about what Shannon hopes each viewer will take away from her work, notably the power of mother nature and the impact of climate change on storms and storm chasing.

My name is Shannon Bileski. I am a part-time photographer and a solutions analyst for an insurance company as my full-time job. I’m a storm chaser of extreme weather and the aurora.

In 2007, I saw my first tornado in Elie, Manitoba. It was Canada’s only F5 – the strongest tornado ever to occur in Canada. I happened to be traveling to my niece’s third birthday party and my partner mentioned that there were some thunderstorms on the way and we might run into them. As we were driving along, we ran into hail the size of golf balls, and off in the distance I saw what appeared to be a funnel cloud. From there, it touched onto the ground and we watched it for about half an hour. Luckily I had my digital camera with me. After that I bought my first DSLR and I haven’t stopped photographing storms since.

This is the only supercell I was able to capture in 2021 due to smoke and forest fires. This particularly smoky season gave way to this beautiful supercell with smokey skies, a rain shaft coming down, lightning, and hail.

3. What style of photography would you describe this as and do you typically take photographs in this style?

This is landscape storm photography, one of my main genres. As a photographer, you learn and grow and develop your own style and favorite genres. I’ve also taken portraits, newborn photography, and macro photography. Storms are my biggest subject, followed by aurora, and then landscapes.

4. When and where was this photo taken?

5. Was anyone with you when you took this photo?

Yes, I was out with some storm chasing friends. Usually I am by myself; I have a few people that I’ll go with every now and then, but the drive by myself can be very peaceful and therapeutic. Depending on the storm setup, there can be up to five or six other storm chasers that I’ll meet up with before or after a storm.

6. What equipment (hardware and software) did you use?

I typically shoot my time-lapses with the lightning trigger on, and I can usually catch about 95% of lightning strikes this way.

Every year, I’ll put up to 20,000 kilometers on my car while chasing storms. The last couple of years, though, due to the wildfires and drought, there have not been as many storms. Whenever there was a risk of thunderstorms, the risk was diminished because of the smoke in the air. You need certain ingredients to come together to produce these types of scenes, including heat and moisture.

Typically, I’m driving six hours each way and there were several trips last year that just didn’t produce. Around the time of this photo, a friend and I decided to go together, despite the season’s conditions. We drove out, met up with some friends, and sure enough, we came upon this scene. We all raced towards it. We were all desperate for a storm.

I always set up my camera, breathe, and take that moment in. Just standing in front of this scene, this photo is a depiction of what I saw in my head. I did do some editing of the colors and contrast, but this is what I saw.

With all of my photography, I edit my images to portray the scene as I stood there. We had lightning, thunder, and inflow winds. The wind at our backs. The moist, warm air hitting your face. It’s an incredible feeling. It’s very peaceful. Mother nature just produces beautiful skies and that’s what I love to share and as a storm chaser, this is what you want to see.

8. Did you know right away that you got a shot that you were happy with?

9. Did you edit (or do any post-processing/production on) this photo?

When I stand in front of a scene like this, it has more meaning and I see it in my head as I stand there with a more vivid color, more contrast. I pull out the details in my images to make it look how I saw it. I struggled with this one because the oranges were not editing exactly the way I saw it. I actually processed this image twice and the second one is in more of a blue tone. I spent more time bringing in tones that I saw in my vision. For example, the moody, purpley darkness. 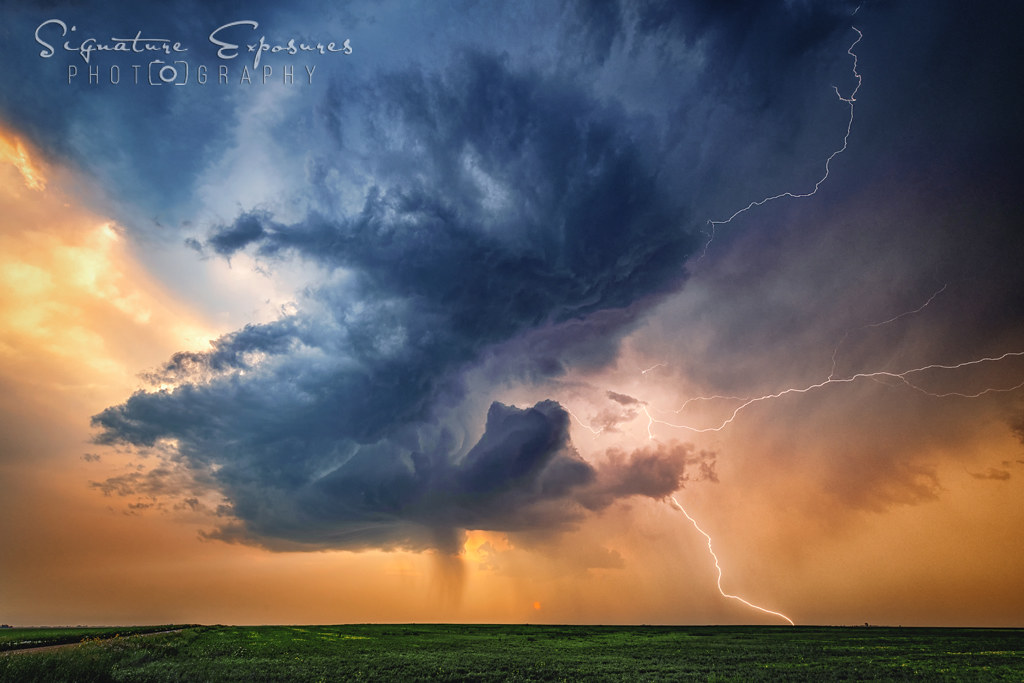 10. Did you learn anything in the process of taking, editing, or sharing this photo?

I learned some different techniques within Photoshop to isolate the oranges and to pull out the colors I saw. Also, from a personal perspective, one of my mentors once told me, “never publish an image that doesn’t represent you.” In my mind, this image was 99% there, and for me, that was good enough. I learned to let it go.

12. Do you remember what you had for breakfast (or lunch or dinner) the day you took this photo?

I typically don’t eat breakfast, so it was probably just coffee. I do remember us stopping at Tim Horton’s while we were on the road. Typically there’s not a lot of time to stop while you’re storm chasing, so that means Tim Horton’s or gas station sandwiches.

13. What would you like people to take away from this photo?

The power of mother nature. She can be scary but so beautiful. Everyone should see the beauty of mother nature in these scenes. I’ve been chasing the aurora for 12 years and it never gets old. The same with storms; it’s always that beauty that keeps me in awe. If you’re too afraid to go out and do it, that’s what I’m here for – to go out and do it and share these powerful moments.

14. Is there any feedback that you’d like to get on this shot?

15. How can anyone reading this support your work?

16. How has climate change impacted your craft of storm chasing?

Each season is different. In order to chase storms, we need the moisture. If there’s too much heat then there’s no moisture. With the forest fires, the smoke in the atmosphere definitely impacts storm chasing and storms. It will stop the storms from happening.

This year, we’ve had a record number of snow in Manitoba, whereas last year we hardly had any. Right now, we’re sitting on six feet of snow in our snowbanks. We’re hoping that that will bring more moisture to produce more storms and minimize the impact of forest fires.

17. What are the goals you continue to set for yourself and what do you want to photograph next?

As a storm chaser, I want to become better at forecasting the weather. I had skipped out on a few storms which ended up producing massive storms and tornadoes, so I’d like to improve forecasting and being in the right place at the right time.

As a photographer, I would love to see and shoot a waterspout. Sprites, too. Sprites produce from really strong thunderstorms, producing lightning emissions over the top of the clouds, in the upper atmosphere. I’d like to capture these lightning phenomena.

18. How did you get into storm chasing and what tips do you have for people that might be interested in it?

After seeing a tornado on the way to a niece’s birthday party in 2007, I bought a DSLR and took a course on storm chasing at the University of Manitoba. Over nine weeks, we learned a lot about storm chasing and forecasting and even went out on a storm chasing trip. We didn’t see any tornados, but we did see storms, which was pretty cool.

From there, I spent a few years chasing after storms myself, but I still hadn’t seen a tornado since 2007. In 2015 and 2016, I went out on some storm chasing tours with Extreme Tornado Tours. On the last trip in 2016, we saw about 13 tornadoes in just one day and we were about 50 to 100 yards from each one of them.

If anyone is ever interested in storm chasing, I recommend going with someone with experience. There are tons of tornado and storm photography tours in Canada and the United States. The College of Dupage also offers a storm chasing class that includes a storm chasing trip at the end of it. 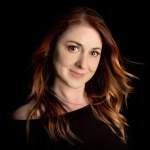 Shannon Bileski is a photographer and storm chaser of extreme weather and the aurora. Her photo, “Electric Storm over rural Saskatchewan Reedited,” was the winning photo for the nature category in Your Best Shot 2021.

Updates to comment mentions on galleries, our help center, and some important fixes for group admins and the activity feed.