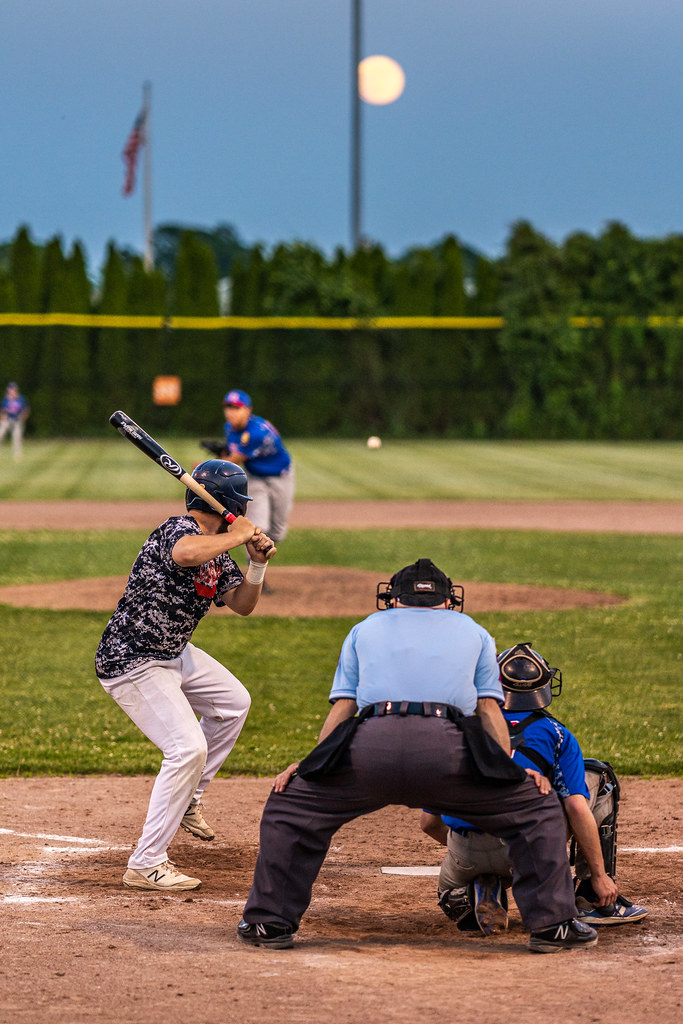 My name is Frank C. Grace. I have been married to my high school sweetheart, Bonnie, for 29 years, and we are proud parents of our 18-year-old twin boys, Nathan and Nicholas. I use my Master of Science degree in Polymer and Color Chemistry to pay the bills as the Director of Research and Development for a small textile converting company in Taunton, Massachusetts. Over the years, photography is really where I find peace of mind to express myself and share what I see through the lens.

In this shot, I like to think I captured the essence of a typical warm summer night watching baseball in New England during the rising Strawberry Moon.

I guess this would technically be a sports photography shot, even with some action of the pitch being thrown and the batter waiting for the ball to get to the plate. I would not say that shooting sports photography is what I typically do. To be honest, I got really into shooting track and baseball this past season because one of our boys was into track and the other into baseball for their high school varsity teams.

I first started to take shots of just my kids, then snuck in a few of their teammates, and it took off from there. They considered me their team’s “official team photographer,” so I ran with it. There is something about capturing these events, the wins, the losses, the sportsmanship, and friendships that I got to witness through the lens and getting to know the kids through the season. After an event, my kids would share the photos with their teams, and that spread to their family and friends. The next thing I knew, I was at every event, and I liked it more and more. More importantly, the kids and families told me how much they appreciated the photos (I didn’t charge for any of it).

My first photography love is documenting historic locations, which is a bonus if the places have a spooky, abandoned, or haunted history!

This was taken in the United States at New Bedford High School in New Bedford, Massachusetts, on June 13, 2022. This was not a high school baseball game but an American Legion league game. My son, Nathan, was an outfielder and pitcher for New Bedford Post 1, District 9, but is not seen in this photo. He was in the dugout waiting for his turn at bat. Their team was playing the South Attleboro team.

I was there with my wife, Bonnie. Our other son Nicholas was also there to support his brother Nathan playing. My sister, Linette, also came to New Bedford for the game to watch.

I shot this photo handheld using my Sony A7RIV with my Sigma 85mm f/1.4 Art lens. I used only Lightroom to process this one. I was right up against the backstop fence and shot wide open, so the fence would be completely out of focus and not distract from the view.

I wanted to capture a twilight action shot under the Friday night lights. When I saw the Strawberry Moon rising nearly behind the pitcher, I could not pass it up!

I put the camera in crop mode so that I would get an insane amount of rapid-fire shots to catch the baseball in midflight about halfway to the batter. I think I did a burst of about 20 shots or so. Using the crop mode really helps with the shots per second.

10. Did you edit (or do any post-processing/production on) this photo?

I always shoot in RAW because I like to make the processing settings to get the look I want instead of using a preset or shooting in JPG. I used only Lightroom to go the processing in this one. Other than my usual baseball photo edits, I used Lightroom’s graduated filter to bring the sky back to the darkness that was really there and used a brush filter to recover the brightness of the moon.

11. What encouraged you to share this photo online and with others?

I didn’t have it in mind then but sharing it makes me think that maybe it’ll remind someone to take a look around when you go somewhere or are doing anything. Take the time to appreciate your surroundings and soak it all in. For this shot, that would be the sounds of Summer, the baseball hitting a glove or bat, the crowd cheering, and that lovely moon that showed to watch the game.

It seems cliché, but I learn something every time I am out with my camera. This time it was using the wide-open aperture of the lens. That both allowed for a relatively clean shot when it came to the ISO needed to be still able to use 1/1250s shutter speed to stop the baseball in the air. That aperture also allowed to not see the fence I was shooting through and also helped to isolate the players involved in the play—something you can’t normally see in real life or even on TV.

Just coffee for breakfast, PB&J sandwiches, and potato chips for lunch, and I think we stopped by Wendy’s for a fast food fix immediately after the game. I was starving!

To enjoy what you are doing or seeing when you go out. Stop and take a look around!

Feedback is always good because it always shocks me when I hear what other viewers get from seeing a shot. I know what I like, and it’s nice to hear if others feel the same or get something from a photo I would not have guessed.

I have a SmugMug site I have had for many years with a wide range of stuff I like to shoot. It can be found at: https://trigphotography.smugmug.com/
I can be reached on Instagram @frank_c_grace and Flickr.

Frank is 52 years old and works in the textile industry, but his true passion is using his camera to capture places and scenes and process those images in hopes of conveying what it was like and what it felt to be there. Frank lives in Acushnet, Massachusetts, with his wife, Bonnie, their 18-year-old twin boys, Nathan and Nicholas, and their dog, Zoe.