Most of us would have a panic attack standing hundreds of feet up in the air, hovering above a bustling city. But for Daniel Cheong, known on Flickr as DanielKHC, there’s no bigger thrill than “rooftopping” — a heart-stopping photography movement which involves daring photographers climbing to the top of city skyscrapers, capturing incredible and adrenaline-pumping views beneath them.

“The feeling being so high up is indescribable, it’s like you almost own the city from a photographic point of view,” Daniel tells The Weekly Flickr in the accompanying video. “It’s just a surreal experience to capture that moment.”

Living in Dubai, Daniel is surrounded by some of the most architecturally beautiful and tallest buildings in the world. Apart from a couple of photos he took from a helicopter, all his shots are taken from high balconies or rooftops. Daniel describes being up so high as an exciting experience that offers spectacular 360 degree views that most people would only dream of. 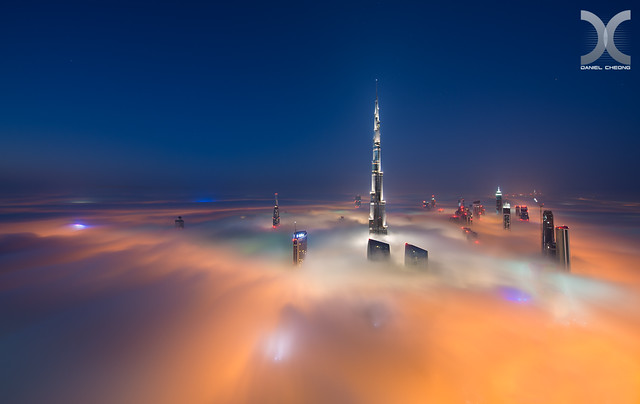 “It’s so exciting to watch a big city look like a big jewel, with so many millions of lights shining on buildings nearby,” Daniel says. “You can spend the whole night shooting there — shooting wide, shooting with a tele[photo] lens or close to a building, etc.,” Daniel explains. “At the end of any rooftop session, you can walk away with hundreds of different shots, and it’s incredible.”

It helps that he isn’t afraid of heights. Daniel, however, does encounter dangerous and unpredictable situations on his shoots.

“In order to get the best pictures, I put my tripod close to the edge [of the buildings],” Daniel explains. “But I’ve been on some rooftops where the ledge is too high, so I find myself climbing a ladder [that he carries with him] to reach the ledge. And the whole time I just sit there, trying not to move too much, using my camera on a very fixed space. I won’t lie, it can be frightening at times.”

What makes Daniel’s photos so captivating is they border the line of surrealism. He does this purposely by using a process called digital blending, which consists of combining multiple exposures of the same scene (but taken at different shutter speeds) to create a High Dynamic Range (HDR) image.

“When you apply that HDR process to a cityscape, the results can be extremely beautiful,” Daniel explains. “The clarity and the level of details just pops. Also, because I’m using a camera that has a very high megapixel size, sometimes you can see up to a window or even past it. This is why I call my photography ‘hyper-realistic cityscape photography.’ I try to enhance the image and details so it’s even beyond what the human eye can see.”

One of Daniel’s favorite photos to capture are called “vertigo views” which is simply shooting the camera looking down but away from the building. This style of photography is striking and incredible, but it can induce a sense of vertigo, which Daniel says has caused some of his viewers to feel uncomfortable.

One of the scariest experiences Daniel’s ever had was shooting a vertigo view called Glamorous.

“I had the chance to get access to the 101th floor of a building under construction in Dubai Marina,” Daniel explains. “There were amazing 360 degree views from there, however there was no ledge. In the end, my camera was low on the tripod, looking down literally hanging, and I was crawling on the floor to compose the shot. It was terrifying but the photo came out beautifully.”

Today on Flickr, Daniel has over 20,000 followers and over 10 million views. The challenge he faces is to produce a new image that’s better than the last. He constantly strives to find new rooftops, angles and viewpoints that inspire viewers.

“At the end of the day, the reaction I want from the viewer is ‘Whoa’,” Daniel admits. “Every shot I post, I want the viewer to say ‘Wow, he did it again.’ That’s what makes me happy. I love to share what I see with everyone else, and that’s what keeps me going back up for more.”

Visit Daniel’s photostream to see more of his photography.

Previous video episode: Check out the stunning Arctic photos from a photographer who braves subzero temperatures.

Our last Flickr Friday theme was #SomethingGoldSomethingBlue. This is a selection of our favorites from your submissions. It is amazing to see how specific colors […]