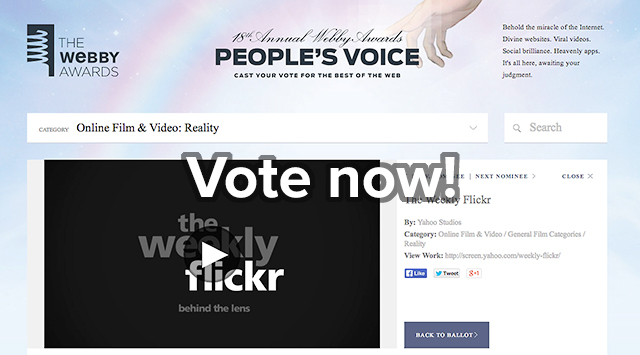 You may have already heard that The Weekly Flickr is nominated for a Webby Award in the category of Online Film & Video Reality, and it’s your chance to cast your vote.

Every Friday, TWF showcases interesting, intriguing and beautiful photos and the Flickr members behind them here on FlickrBlog to to amaze and inspire you.

Since its launch in December 2012, TWF has posted over 70 episodes documenting the work of talented Flickr photographers from around the world. We feel very honored that TWF is nominated and need you to win.

Head over to the Webby Awards website and cast your vote!

Here’s a quick rundown of our most popular episodes to date:

Christian Hopkins – “Photography was a form of therapy; probably saved my life.”

If you want to be featured on TWF, send a tweet to @flickr and @theweeklyflickr or submit your photos here: https://www.flickr.com/groups/yahoo-studios-the-weekly-flickr-photos/

“The Wall Along Wilshire – Ten Sections of the Original Berlin Wall” Tanja Barnes (a.k.a. @TanjaB on Flickr) started her interest in photography with a […]