Phil Dokas is one of those rare, go-to engineers who can take on any challenge and make it look easy. He’s been a part of the Flickr team since 2011, and a Flickr member since his freshman year in college in 2004. As a well-established Flickreeno, Phil can name pretty much everybody who’s worked here for the past decade and knows all the inside jokes and “remember-whens” nobody else was around to get. He’s also a proud Michigander who happened to meet his wife through this very platform!

Phil was member 11,146 of Flickr which gives him the perfect perspective to reflect on all the good (and bad) that he and Flickr have enjoyed and endured together. 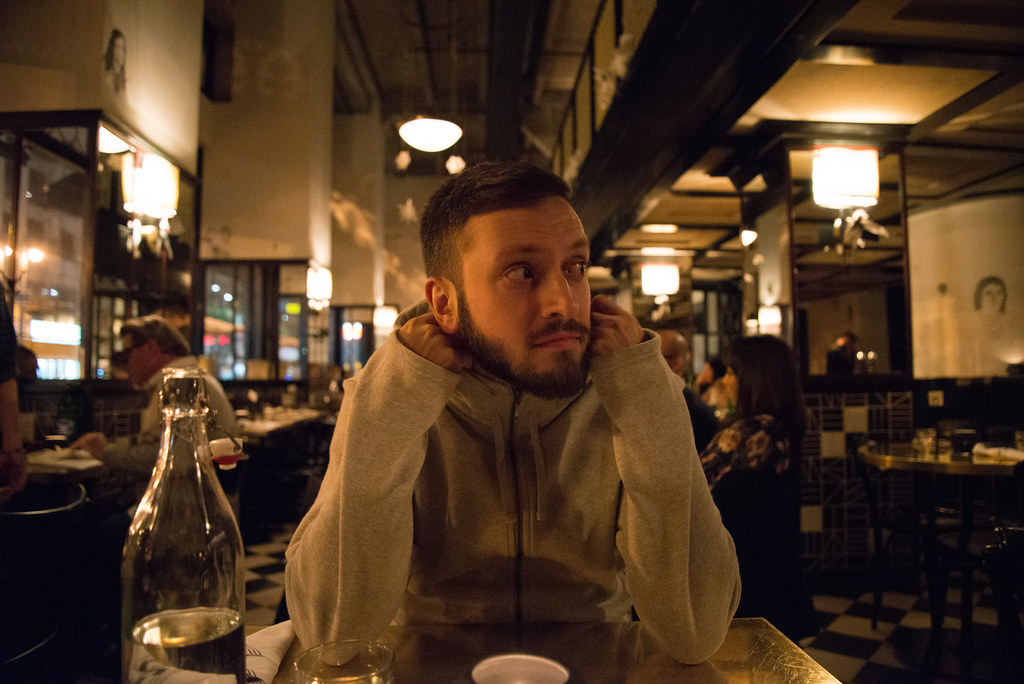 What’s your role at Flickr and what does it really entail?

I’m a front-end engineer, though with being here for nearly a decade, I’m jokingly called a historian too. My typical day is usually split between my project du jour and fielding incoming questions, requests, and bug reports. I kind of love the latter because each one’s a fun little puzzle. Helping someone who’s unsure of where to go next onto a good path is a great feeling.

What got you started here?

I’ve been here since September 2011. I’d been avidly using the site since 2004 shortly after it launched and loved it. I had a friend on the backend team who let me know about a rare frontend engineer position opening, and I knew I had to go for it. My girlfriend at the time, now wife, and I had been talking off and on about moving outside of Michigan, and San Francisco was one of our top hopes.

What’s something unique about working here?

It’s both a wonderful thing and a frustrating thing, but working on Flickr is interesting because it’s a huge site with a massive legacy, but we’re a very small team. Being small is great because you can truly be nimble and very involved in many decisions, big and tiny. It’s also tricky when there’s a bit too much important work vying for attention. But it’s a great challenge, and it’s always grounding to know that your decisions and plans will affect so many people quickly. It really helps you take a step back to put in a little extra time and attention. 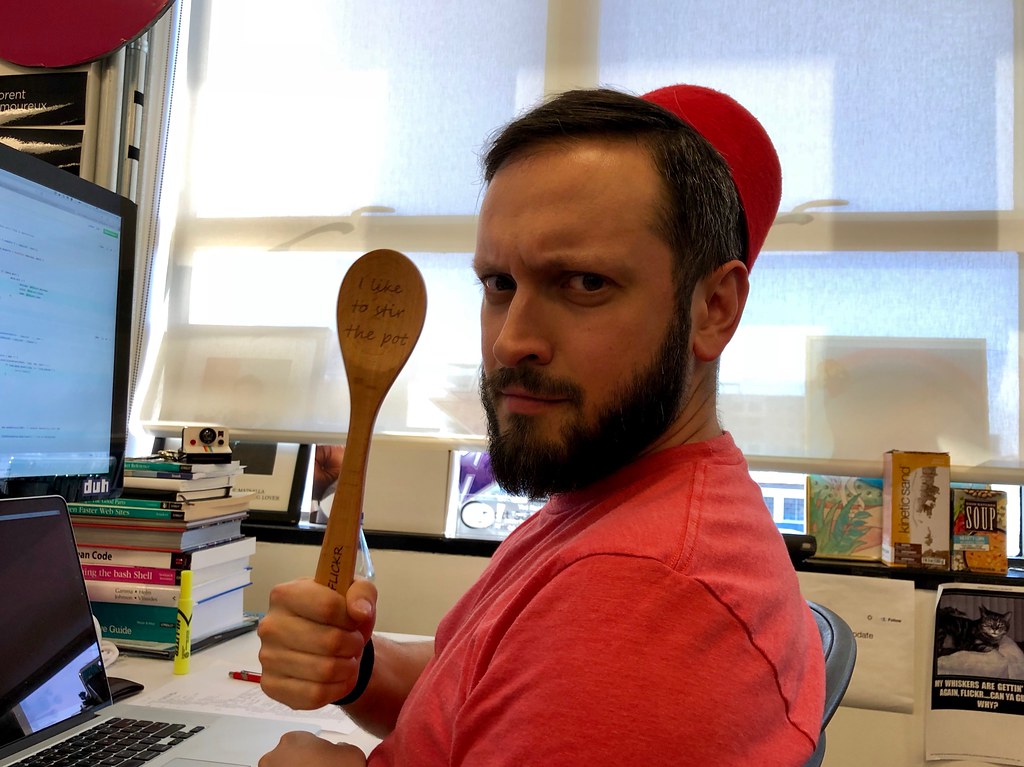 You’ve been a Flickr member almost since its inception in 2004. What made you join?

It was my freshman year in college. It was actually after the game [Game Neverending] had ended. I never played the game, but Flickr grew out of the photo-sharing feature inside. When I signed up for Flickr, there was still this concept of “Shoebox” where you had your photos, and it was more of a worldwide chat. I tried it out but didn’t have much use for it. But a couple of months later, I did a study abroad and bought a camera. I used Flickr to upload all my photos so that I would have them and could get them later. I signed up for Pro too since I had more than 200 photos and Flickr had a few limits around that and uploading bandwidth at the time. Then I found all sorts of groups and interests and weird collections and got hooked. There was nothing like it at the time.

So just how DID you meet your wife through Flickr? That seems too bizarre to be true?

Ah, nothing like a love story born from metadata! So, years and years ago, I subscribed to the RSS feed for the Flickr tag of my hometown. There are some groups for the city, but I found the tag returned way more interesting stuff. And one day, as I was scrolling through, I noticed a cute lady writing about something or other of interest. We’d occasionally comment on each other’s photos, and eventually, that led to talking, which led to some dates, a move to San Francisco, a wedding, and some little feet running around.

What were your thoughts when you learned Flickr was being acquired by SmugMug?

I thought it was an easy choice. The thing I didn’t like about my job was dealing with the bureaucracy of synching up with a huge parent organization that forced decisions on us that didn’t line up with what we wanted to do or to use. So, I thought, “Ok, without that bureaucracy we’d be able to right a ton of wrongs. Cool! When do we go?”

The SmugMug folks went way out of their way to make the transition smooth. And on the engineering side of things, I knew this would be a huge opportunity to rethink some of Flickr’s technical underpinnings since we’d have to rebuild certain things without free access to Yahoo systems.

I think that effort went very well. Everyone put in Herculean work, and then on switch night, we all worked through a guide that was hundreds of steps long to transition as smoothly as possible. Now on the other side, with the site faster than ever and a huge amount of tech debt cashed out, it feels great. 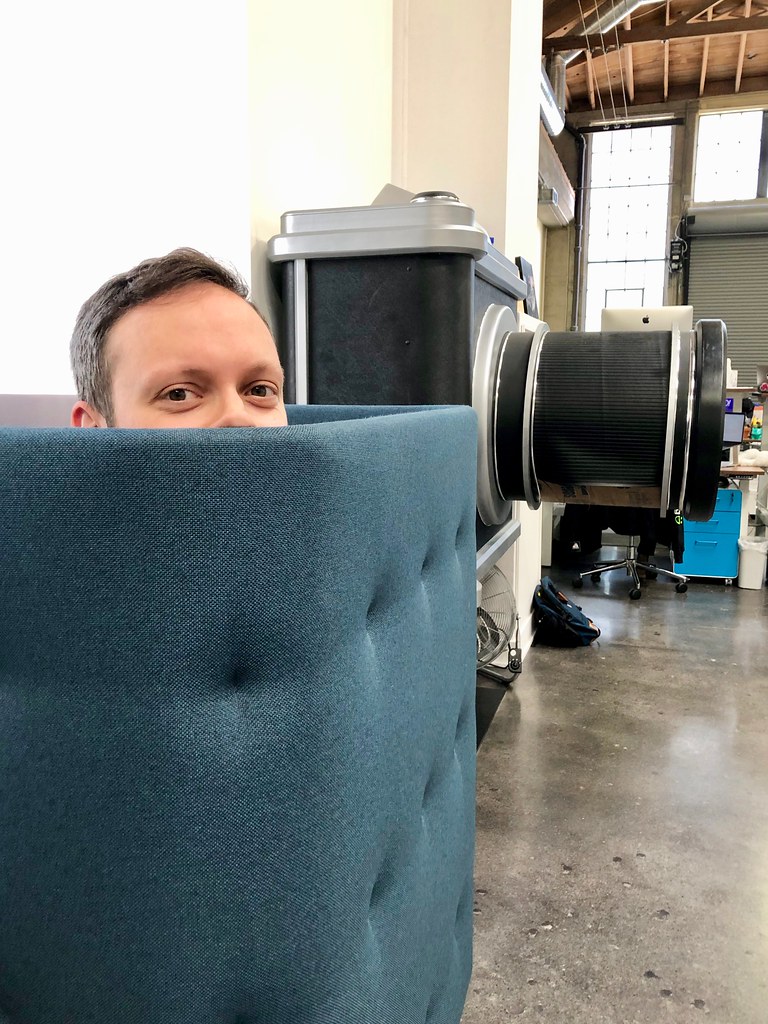 You’ve been around long enough to have some wild stories. Got a favorite?

The Phil In The Wild incident is kind of funny. This was just yet another thing we had to rewrite because our free access to a Yahoo system was going away. We used Yahoo’s CDN for all of our little icons and fonts, and other little assets for the site. Well, in writing our own system, we decided it’d be good to have an obvious 404 page. One of our engineers suggested this image, which has eye-poppingly graced an internal error page in the past. That decision was quickly settled on, and we all moved on. Little did we realize that once we switched over to our new CDN that any place we had a broken URL for an image, the browser would happily accept the 404 image of my face in lieu of what was intended. And that’s how my face became an icon on a few people’s iPad home screens for a while. Besides that, there are just too many inside jokes to even know where to start.

What’s one thing you would like our members to know about you?

I hope they know that we are listening and understand the common complaints about this or that. We feel them too. All these things do matter and while I want to fix every bug I see, we usually have to carefully prioritize. We do know about these things, and we use Flickr. I have Flickr tabs open every single day, always, on my phone, and work computer, and home computer, and iPad. I’m using the sh*t out of the website, but there are only so many hours in the day, and we have really big fish to fry, and we have to focus.

Every few weeks, Flickr will feature other members of our team. Get to know all of us that make it happen! Meet Holly Lawrence, Flickr and SmugMug’s Head of Trust & Safety, and join the conversation here.