In this One Photo, 16 Questions interview, Senior Curator at the State Library of New South Wales Geoffrey Barker shares the story of Betty Broadbent, the most photographed tattooed lady of the 20th century. He discusses the backstory and context of some of the photos of Betty that appeared on the Australian pictorial magazine, PIX on April 23rd 1938, which were later acquired by the Library and made available through their Flickr account. 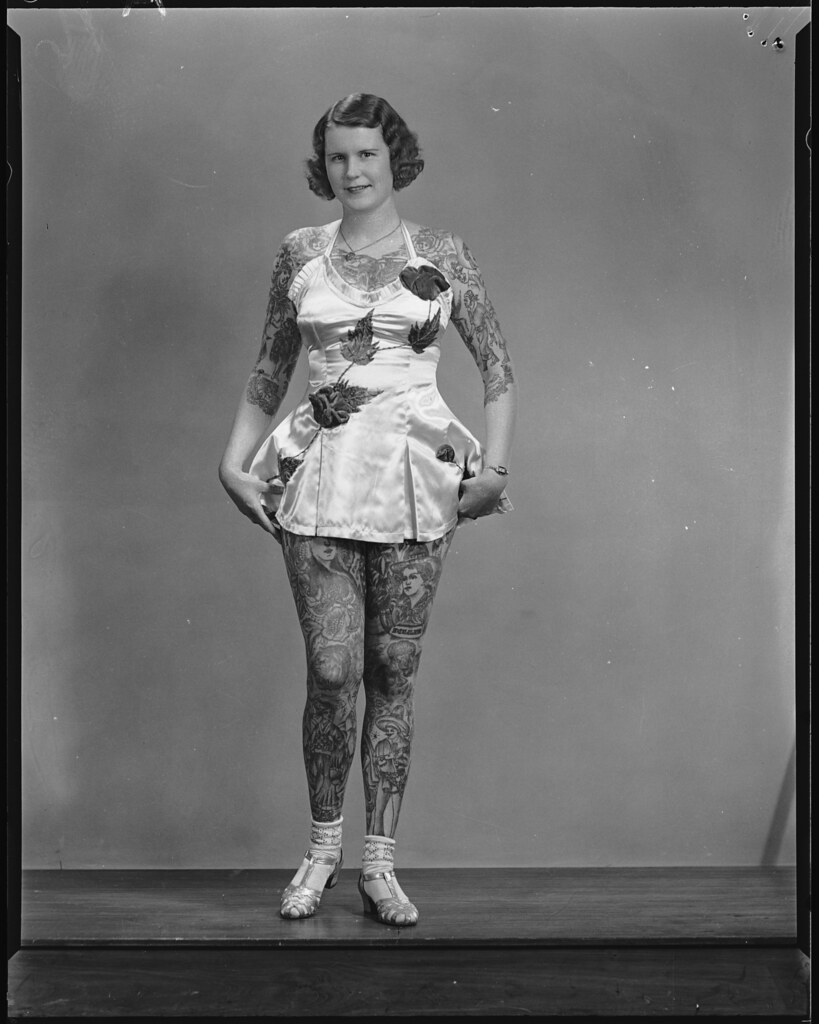 1. Please tell us about the State Library of New South Wales. When did you join the Flickr Commons? What type of photography do you share on Flickr?

The State Library of New South Wales is the oldest library in Australia, with a direct link back to 1826. After nearly 200 years it has amassed a huge collection of rare books, maps, paintings and around two million photographs. This includes the earliest extant Australian photo taken in 1845 by George Baron Goodman. We joined the Commons way back in 2008 and over the past four or five years have started uploading a single photo three times a week rather than doing bulk uploads of collections. This allows us to vary our content and make it easier to work with other Flickr groups and our followers. Our Mission is to collect and preserve materials and evidence relating to our place in the world and make them accessible to everyone in New South Wales and beyond.

2. In one sentence, please describe this image you’ve shared in your Flickr collection.
This photo of Betty Broadbent, the ‘Tattooed Venus’, was taken in 1938 by Ray Olsen, a photographer for the Sydney magazine, PIX.

3. Can you tell us more about Betty Broadbent, the ‘Tattooed Venus’ and why she became the subject of these photographs?
Betty was born in 1909 in Philadelphia in the United States and her interest in tattoos began at the age of 14 when she met Jack Redcloud in Atlantic City. By 1927 Betty’s entire body was tattooed and she was exhibiting her art with the Ringling Brothers and Barnum and Bailey Circus. Betty also learnt the trade and tattooed others, working in studios in Montreal, San Francisco and New York before retiring in 1967. In 1938 Betty visited Sydney at the invitation of the Australian sideshow entrepreneur Arthur Greenhalg. Betty and the rest of the circus troupe performed at that year’s Easter Show in Sydney while Pix Magazine ran a story on Betty. She appeared on the cover of PIX Magazine on 23 April 1938. 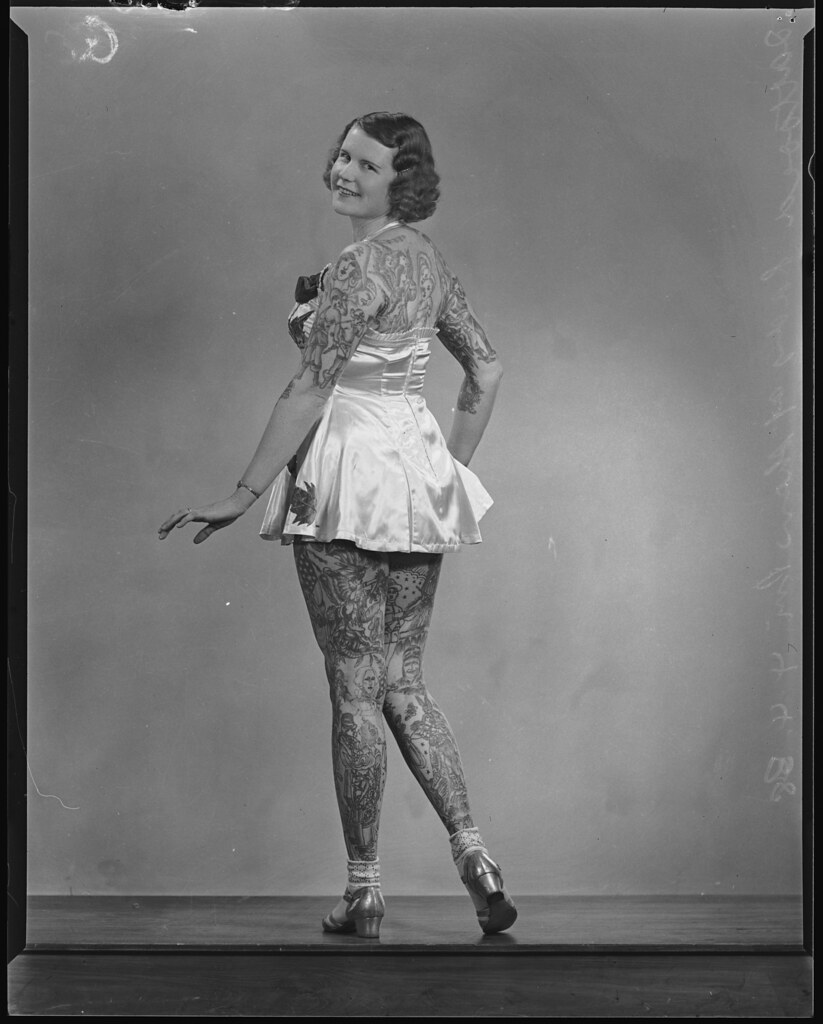 4. When and where were these images created?
4 April 1938, Sydney, New South Wales, Australia.

5. Who took these photographs and do you know anything about the photographer(s)?
The photographs were taken by photojournalist Ray Olsen who worked for the Sunday Sun and Pix magazine in Sydney.

6. Do you know what type of camera was used to take these photographs?
We are not sure but it is highly likely to have been a Graflex camera as these were very popular with photojournalists of the period.

7. Betty is not the only tattooed lady (or person) in your Flickr collection. What did all these ladies and gentlemen have in common?
The desire for tattoos is often a very personal one but like other elements of popular culture tattoos followed fads and fashions. In the 1930s women had designs tattooed on their legs specifically to mimic expensive stockings. Other tattoos were more traditional and represented rites of passage. For example, the older sailor represented in this collection has a number of swallow tattoos each of which represents 5000 nautical miles travelled at sea.

8. What made these tattooed ladies so popular during the turn of the century and onward?
Full body tattoos, especially on women, were often associated with groups and communities which were perceived as peripheral to mainstream society. Circus and other entertainments played on this to create a demand for people willing to expose their body tattoos in public.

9. Your album description explains that Betty performed in a circus. Was getting tattoos back in the 30s seen as an ‘oddity’ reserved for shows and entertainment?
As noted above, people had many different reasons for getting tattoos but in the 1930s, getting a large number of tattoos was mainly the domain of sailors and other subcultures. Those that worked in shows and entertainment were even rarer.

10. What type of tattoos did these ‘tattooed ladies’ have? And where?
There seems to be no real consistency in the artworks on ‘tattooed ladies’ as personal taste and contemporary interests seem to have dictated their choice. Betty for example had 465 tattoos on her body including a tattoo of the Madonna and child on her back and tattoos of Charles Lindbergh and Pancho Villa on her legs.

11. Who donated these images to the Library’s collection?
These photographic negatives were acquired by the Library as a part of a much larger collection of negatives from Australia Consolidated Press Magazines Ltd.

12. Did the Library learn anything in the process of collecting, preserving, or sharing these images of Betty?
These negatives were digitised as a part of the State Library’s Digital Excellence Program, a major initiative supported by the NSW government. Up until this time we had no knowledge of their existence and making them available online enabled us to do some background research on them for the first time.

13. What encouraged you to share these images on Flickr? Did you share them anywhere else?
As soon as we saw these are early examples of tattooing we felt sure there was an interesting backstory and sharing them with other platforms seemed a great way to feed them into the broader community. As part of this process we shared them with Flickr, updated the Wikipedia entry for Betty Broadbent and added an Australian section for the Wikipedia article Tattoo. We also wrote an online story about the photographs from the Sydney Tattoo Studio of Fred Harris.

14. The images in your Flickr account are all available for public reuse. Have you seen any particularly creative uses of these images of tattooed men and women?
Apart from seeing the photos included in numerous galleries we haven’t come across any, but we are hoping to see some in the future.

15. What would you like people to take away from the images in this album?
Hopefully they will take away a better understanding of the complex and wonderful world we live in.

16. Is there any feedback or information that you’d like to get on these images? What should people look out for next from your Flickr account?
We would welcome more information on the significance of the various tattoos depicted in these photos.

Bonus question – Are there any new albums or collections that you are planning to upload?
We are currently developing a new photographic exhibition and expect to be discovering many more previously undocumented photographs. We will be uploading these to Flickr over the next six months. We usually upload a new image every Monday, Wednesday and Friday.

If you enjoyed this story, please consider giving the State Library of New South Wales account a follow to keep up with their newest uploads, or leaving a comment or fave under your favorite photos.

The Flickr Commons is a program run by Flickr since 2008 designed to help the world’s cultural institutions share their photography collections. If you’re interested in learning more about the Commons and Flickr’s plans to revitalize the program, be sure to check out our latest update here, and consider joining the public Flickr Commons group to participate in the discussion.

Changing colors, shades of gold, and endings making room for new beginnings. Check out these cozy autumn photos from the Flickr community.

Enjoy these photos of Halloween festivities, creations, and traditions taken by your fellow Flickr members.

Marcus Danz is an enthusiast amateur photographer from a small town in northern Germany. We invite you to read the story behind his photo, “Time Flys By”.