We want to extend a big thank you to everyone who participated in our LEGO® Build & Capture Photo Contest and helped make it a success with over 3,400 photos submitted! From nature shots, to movie scene recreations, and everything in between –  the Flickr Community demonstrated how LEGO®, creativity, and photography can work together beautifully and lead to inspiring creations.

Today, we are pleased to announce the winners! With six total winners – get your comments and faves ready and show these photos and photographers some love! 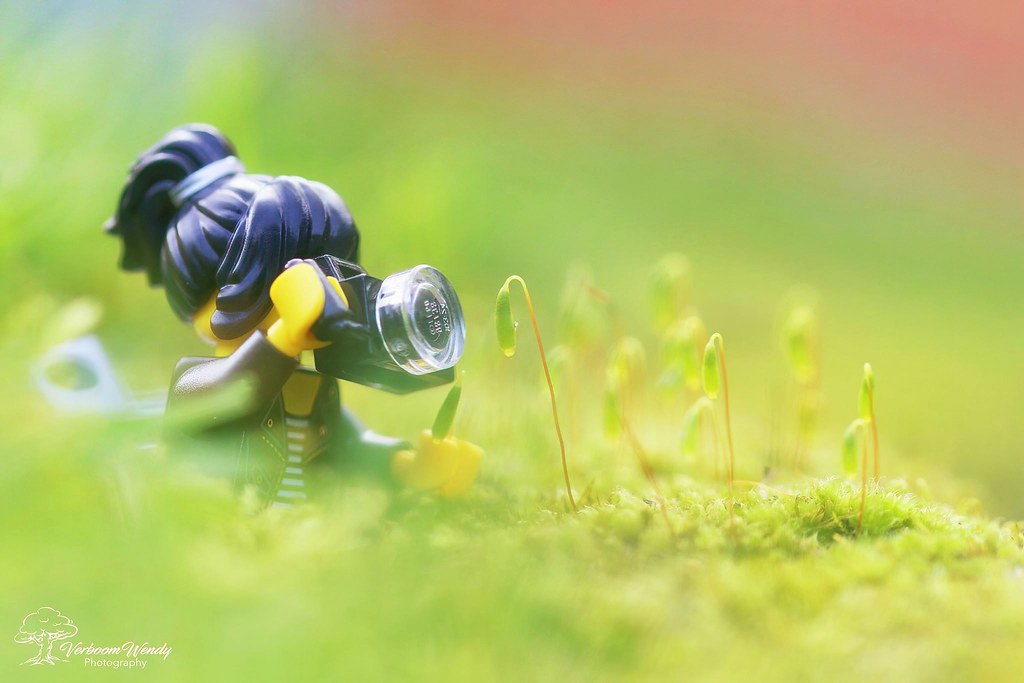 I’m a 40 year old nurse living in the Flemish part of Belgium, where I live with my husband in a rural town. My big hobbies are nature photography and traveling. But toy [and] LEGO photography and building with LEGO is also a passion of mine.

The photo I have chosen is in fact me, doing my greatest hobby, (macro)photography in nature. I like to take photos of smaller insects like the dragonfly or butterfly and by doing that I started to take also photos of smaller toys like LEGO for all the days the animals are not found. –Wendy verboom 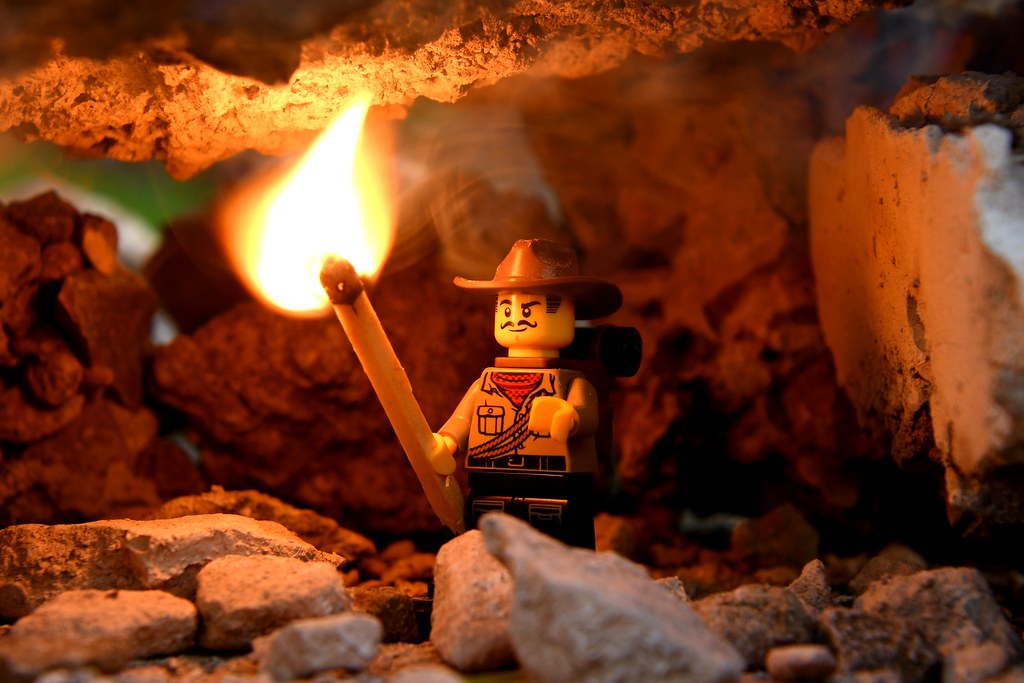 THIRD PLACE: THE WAY OUT BY HELEN WARWICK

I am a chef full time and photography is what I do outside of my normal day job. I am based in Gloucestershire UK.

Have to admit that this photo was a challenge for me not only did it involve setting the scene up which my dad had just had his old garage knocked down so I went looking through all the rubble and concrete bits to find the materials to make the cave but also had to make sure the figure was in focus, light two matches without setting anything else on fire and also take the shot all whilst laying on the floor in the garden with a slight breeze. Lets say it toke me several attempts to get the shot and settings right but once I got the shot and slightly edited it I was a happy bunny. [I’ve] been a photographer for three and half years. I tend to shoot football mainly but I am a huge fan of LEGO especially minifigures.–Helen Warwick 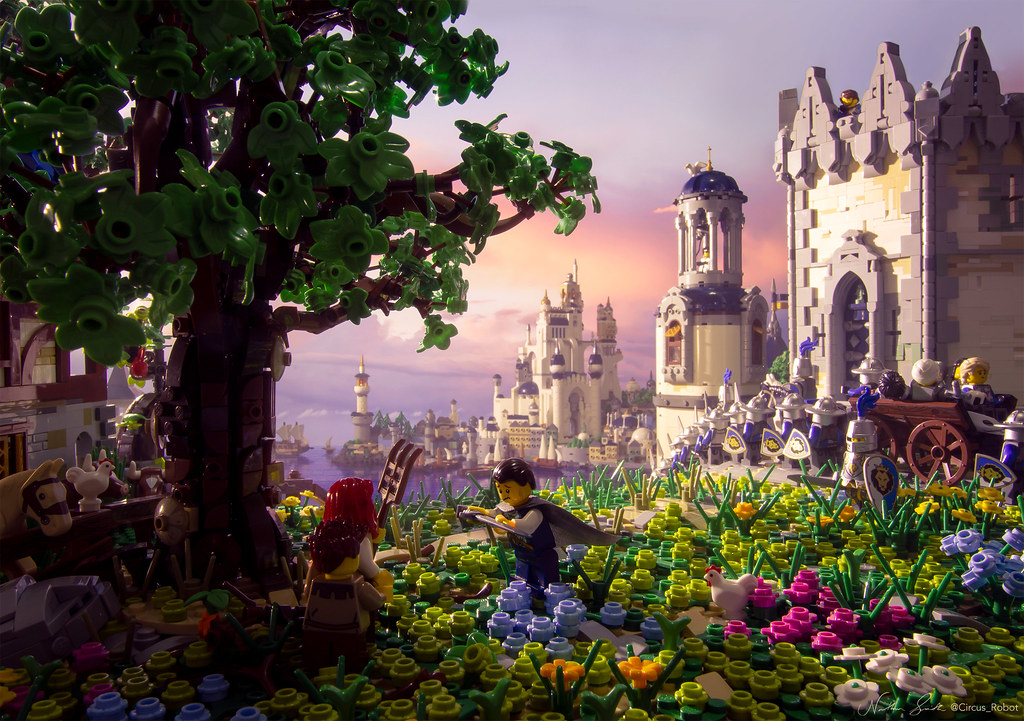 “It was a typical sight in the spring. Long columns of soldiers were marching off and back and off again. The beauty of the flowers, the gulls gliding in the afternoon sun, the roar of the waves carrying grand ships to distant lands all seem to have one purpose…to mask the horror of it all.

It was considered a great honor to be presented with a fallen soldier’s sword, but what once was as triumphant as the bells ringing from sacred places eventually became a dread. Cheers were replaced by mournful wails. And for what? War and profiteering had no end. And as the peasants looked towards the opulence of the capital with its tall towers and grand facades, many wondered what it was all for – and if anyone would miss it if it were gone.”

The build and photography process for “Sunset of Empires” was a very fluid one that took about eight weeks to complete from the initial concept to the final composition. The concept started out much smaller in scope but as I was building the landscape I lost interest so I set it aside to work more on sketches and build out the story further. It was in this period that the defining elements of the image took shape such as the lavish capital city buildings as well as the sword being presented to a mourning family. The rest of my design decisions came from wanting to further emphasize the contrast between the grieving peasants and the grandeur of empires which is something as relevant to our present day as any time in the past. –Nathan Smith 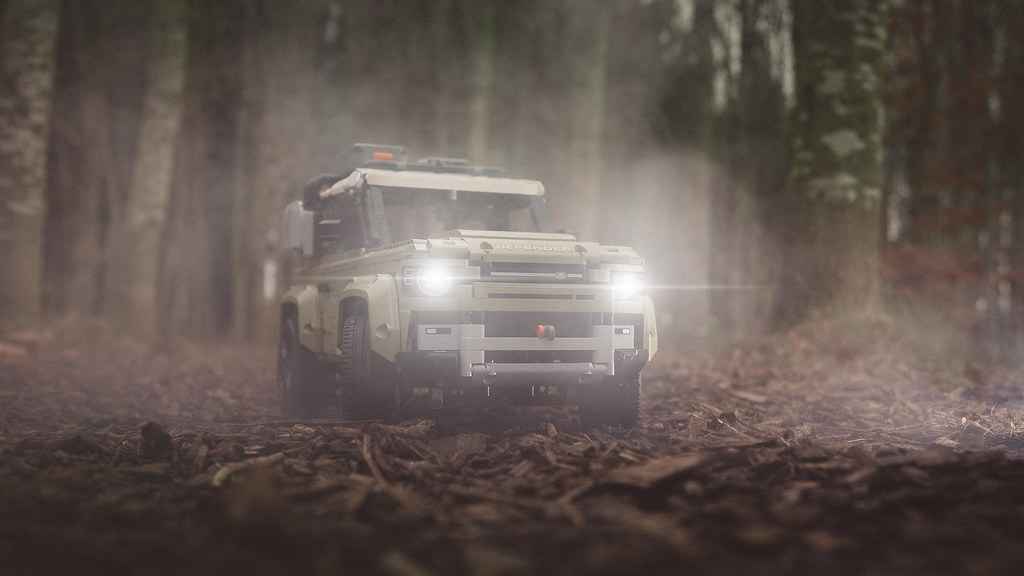 SECOND PLACE: DEFENDER IN THE WOODS BY SUPA DUPA TROOPA (A.K.A. PHIL)

Well, hello there! You may know me as Supa Dupa Troopa but you can also call me Phil. I’m based in Leicestershire, UK. I’ve been creating my LEGO photography for just over three years. I love producing images that stimulate imagination. I use various solutions to get to my end results be it building sets, multiple light set-ups, sunsets, smoke machines and digital editing. Am I a Photographer or a Digital Creator, possibly one, possibly both, I’ve still not decided. But I’m constantly pushing my creative skills, looking for new techniques and developing my style to tell a story through my images. Well, that’s a whistle stop tour of me. Thanks for stopping by and thanks to Smugmug, Flickr and LEGO for organising this competition. Also a massive thank you to the judging panel for giving their time to review all of the excellent images submitted.

This image was captured at a Fosse Meadows, Leicestershire, UK. A fantastic location where I regularly walk with my dog and two daughters with numerous opportunities to take my outdoor images. This particular shot was captured using mainly natural light, with additional lighting from two Lume Cubes. One was positioned to light the front three-quarters of the LEGO Technic Defender and the other to light the fog (atmosphere) spray. The headlights were adding in photoshop during final post production.  –supa_dupa_troopa 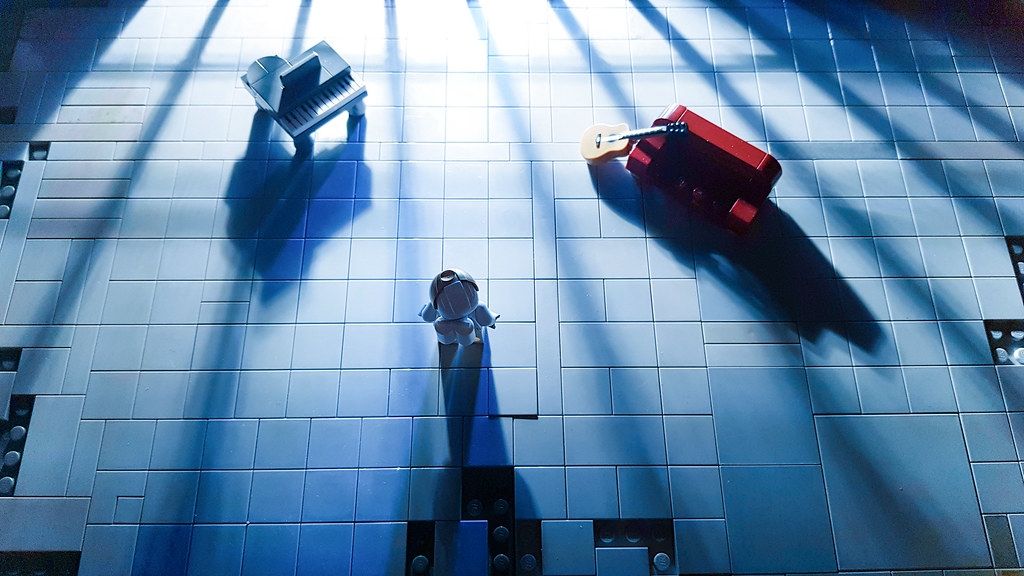 I am currently living in Melbourne, Australia and working in part graphic design/part retail in a licensed independent LEGO store. I rediscovered my love for LEGO and toy collecting back in 2007 and have been building and photographing my creations ever since.

I used to use a compact digital camera, then a SLR before moving on to using my smartphone as my primary camera. I struggled to learn about and develop my SLR skills and I find the automation of the smartphone camera really helpful as it lets me focus on composing the shot much more and I can still make some adjustments later in Photoshop.

Pale Blue Dot was part of a series of shots I did experimenting with small LED lights and Lego window pieces (specifically the window frames with horizontal grilles/muntins). I was fascinated by the ways the windows could throw shadows and combined with lighting could create very atmospheric effects. I built some simplistic walls and windows to experiment with and Pale Blue dot was one result. Two lights, each housing three LEDs, sit in front of the windows while a LEGO spaceperson looks on. I initially took some shots from behind the minifigure but I was missing the full effect of seeing the window frame shadows across the floor. Switching to a high angle, I cropped out the windows themselves so we only see the light and shadow hitting the spaceperson, some objects and the floor. Hiding what the spaceperson is looking at keeps the narrative mysterious and the motif of a person looking out over a landscape or through a window is a common one in Romantic art. I processed the image in Photoshop and played with various filters, eventually settling on a very blue, cold or ethereal ambience. I was quite happy with how the photo turned out as there wasn’t a strong primary idea in the beginning and it was largely driven by experimenting with both the light sources and my camera viewpoint. I should also mention that I was playing some ambient music while editing the photo which I think helped me tease out the dreamy vibe from the raw shot.  –Shannon Sproule

FIRST PLACE: “THE ROAD MUST BE TROD, BUT IT WILL BE VERY HARD. AND NEITHER STRENGTH NOR WISDOM WILL CARRY US FAR UPON IT” BY TOM MILTON

I am an artist and designer from Bristol, UK. I’ve been taking toy photographs for many years now, including LEGO minifigures, six inch scale action figures and miniature spaceship models. I’m a huge fan of practical effects such as light painting and intentional camera movement. But I particularly like to photograph in anamorphic, with a wider aspect ratio and a truly cinematic feel. I think of myself as something of a hobbyist movie maker, telling small snippets of stories with my camera and my toys.

“The road must be trod, but it will be hard. And neither strength nor wisdom will carry us far upon it”. This quote is the first part from a passage in The Fellowship of the Ring. It struck a cord with me due to the nature of how I took this photograph, and just seemed the appropriate title.

I love taking toy photos on location and this one was pretty special. It was three quarters of the way up Mount Snowdon, the largest mountain in Wales, UK, so I can certainly say with a smile that wisdom was out of the question.

One of the major challenges was to get focus throughout the image so there is some focus stacking taking place so each of the Fellowship are sharp and the surrounding mountains of Snowdonia are also clean and crisp. I really enjoyed the challenge of getting these two dramatically different scales to work together in the same photograph. –Tom Milton

A special thank you also goes out to Four Bricks Tall for her help on the judging panel. You can check out her LEGO® photography here.

To watch the recording of the announcement of the winners, visit the SmugMug Live YouTube here.

If you enjoyed participating in this contest or browsing through all of the awesome entries – we invite you to check out the the annual “Your Best Shot” group to share your best shot of 2021. We hope to see you there!

Updates to improve the loading of FlickrMail and more news about what we worked on in November 2021.